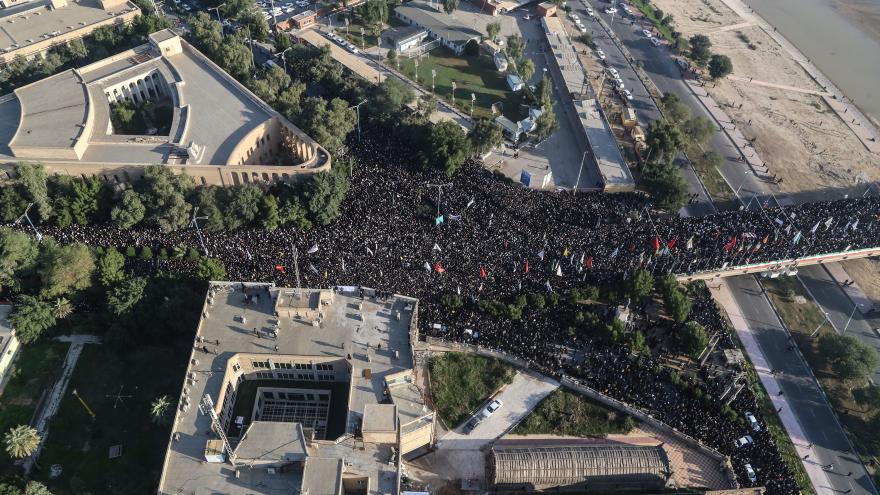 The vote represents a rebuke of the United States over its targeted airstrike on Iranian commander Qasem Soleimani at Baghdad airport in Iraq early Friday morning. The attack has sharply escalated tensions with Iran and has pushed Iraq to reconsider the presence of American troops in the region.

The body of Soleimani, a top general and one of the most powerful men in Iran, arrived in his home country on Sunday and was met by thousands of mourners who flooded the streets to honor him.

Mourners gathered in Iran's western town of Ahvaz, where the bodies of Soleimani and Abu Mahdi al-Muhandis, an Iraqi militia leader also killed in the drone strikes, arrived earlier Sunday.

A funeral service for Soleimani was expected to take place later on Sunday in Mashhad, at the holy site of Imam Reza Shrine. But a scheduled ceremony slated to take place at Tehran's Grand Mosalla on Sunday night has been canceled due to the delayed procession caused by the large turnout of mourners in Mashhad, according to the Islamic Revolutionary Guard Corps (IRGC).

Iran will observe three days of national mourning, paying respects to Soleimani, who was seen as a national hero and has been called a martyr by the Iranian leadership.

President Trump and US military officials have said they killed Soleimani because he was planning an "imminent" threat on Americans. But the lack of evidence provided to lawmakers or the public on that point has fueled lingering skepticism about whether the strike was justified.

On Twitter on Saturday night, Trump framed Soleimani's killing as tit-for-tat retaliation, did not mention any imminent threat and added new threats toward Iran.

He said that if Iran strikes any Americans or American assets, the US has targeted 52 Iranian sites -- a reference to the number of Americans taken hostage in the 1979 revolution -- "some at a very high level & important to Iran & the Iranian culture," he wrote.

"They attacked us, & we hit back. If they attack again, which I would strongly advise them not to do, we will hit them harder than they have ever been hit before!" Trump wrote.

Attacking cultural sites is considered to be a war crime. A 2017 United Nations Security Council Resolution "condemns the unlawful destruction of cultural heritage, including the destruction of religious sites and artifacts."

Secretary of State Mike Pompeo defended Trump's tweet, arguing that such an action would not violate international law and instead suggesting it would be a continuation of the administration's attempts at deterrence and defense.

"If we need to defend American interests, we will do so. What President Trump said last night is consistent with what we have said all along," Pompeo told CNN's Jake Tapper on "State of the Union."

The tweets are "ridiculous and absurd," said Hossein Dehghan, the main military adviser to Iran's Supreme Leader Ayatollah Khamenei. He told CNN that Iran's response "will be military and against military sites."

"Let me tell you one thing: Our leadership has officially announced that we have never been seeking war and we will not be seeking war," Dehghan said.

"It was America that has started the war. Therefore, they should accept appropriate reactions to their actions. The only thing that can end this period of war is for the Americans to receive a blow that is equal to the blow they have inflicted. Afterward they should not seek a new cycle."

Pompeo dodged questions asking to detail the "imminent" attack that Soleimani was allegedly planning and whether it was expected in days or weeks.

"If you're an American in the region, days and weeks, this is not something that's relevant," Pompeo said.

"We have to prepare, we have to be ready, and we took a bad guy off the battlefield. We made the right decision. There is less risk today to American forces in the region as a result of that tack," he said.

Pompeo said he understood the public's need to know but had to balance that with protecting the sources and methods of that intelligence.

"We'll continue to do everything we can consistent with protecting our sources and our methods and our importantly our capacity to continue to see and to understand what's going on and presenting threats," he said.

"As the Secretary of State I also know my solemn obligation to make sure we share with the American people everything we can about why it is we're taking the actions, and how it is we expect that we will deliver to protect and defend America each and every day."

The Pentagon had blamed Soleimani and Iran-backed Iraqi militias for recent assaults on coalition bases in Iraq, including a December 27 strike that killed an American civilian contractor and wounded several US and Iraqi military personnel.

After retaliatory US airstrikes against the militias last month, hundreds of protesters stormed the US Embassy compound in Baghdad on December 31, an attack the US blamed on Soleimani.

Soleimani was the head of Quds Force, an Islamic Revolutionary Guard Corps unit in charge of foreign operations, and he became the architect of Tehran's proxy conflicts in the Middle East. The Pentagon blamed Soleimani for hundreds of deaths of Americans and their allies over the years.

The US military strike against Soleimani in Baghdad and has thrust the future of the US presence in Iraq into question.

The Iraqi Parliament called an extraordinary session on Sunday to decide the future of US troops in Iraq and voted to obligate the Iraqi government to work to end the presence of all foreign troops.

On Saturday, mourners in Iraq chanted "Death to America" at a funeral procession for Soleimani and the Iraqi militia leader who died with him.

In addition, Iraq's Foreign Ministry filed a complaint via two letters to the President of the UN Security Council and UN Secretary General about the "American attacks and assaults against Iraqi military locations," according to a Foreign Ministry Statement.

The complaint was also about the death of Al-Muhandis, the militia leader, and others on Iraqi soil.

"These attacks represent a serious violation of Iraqi sovereignty and the conditions of the presence of the American forces in Iraq," the statement read, adding, "Iraq called on the Security Council to condemn the bombing and assassinations."

Iranian Foreign Minister Javad Zarif seemed to suggest the goal of any Iranian retaliation, tweeting Saturday: "End of US malign presence in West Asia has begun."