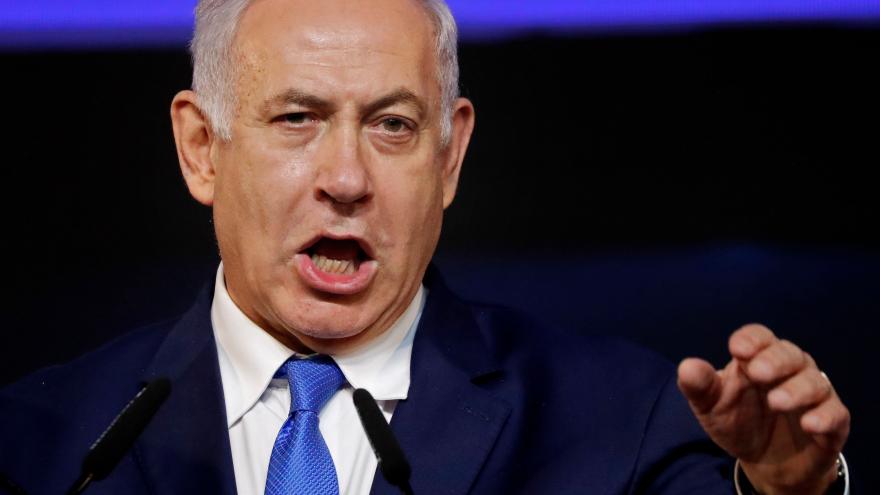 The Israeli military Saturday said it foiled an imminent large-scale attack by Iranian forces and Shiite militia on targets in northern Israel, with a series of airstrikes carried out near the Syrian capital Damascus. Source: Thomas Coex/AFP By Andrew Carey, CNN

(CNN) -- The Israeli military says it has foiled an imminent large-scale attack by Iranian forces and Shiite militia in northern Israel with a series of airstrikes carried out near the Syrian capital Damascus.

Iran has denied that any of its targets were hit.

In a further escalation of tensions in the region, Lebanon's Prime Minister is accusing Israel of an attack on Lebanese sovereignty after two drones are reported to have crashed in Beirut.

The Israel Defense Forces claimed responsibility for the airstrikes near Damascus on Saturday evening, saying it was necessary to thwart multiple attacks by what it called killer, or kamikaze, drones.

IDF foreign press spokesman Jonathan Conricus told CNN the army assessed the threat to be "imminent, as in real-time."

Unlike more standard attack drones, which fire missiles towards their targets, the killer drone acts as its own missile by flying into the target itself.

Conricus said that Iran had not used such drones in any previous attack on Israel.

Reporting the Israeli airstrikes, Syria's state-run news agency SANA said the sound of explosions were heard all around the Syrian capital, adding that Syria's military had intercepted 'hostile targets' during the raids.

A spokesperson for Hezbollah, the Iran-backed Lebanese militant group, said that some of its members had died in the Israeli attack, but did not specify the number of those killed.

The UK-based Syrian Observatory for Human Rights put the number of Hezbollah members killed at two -- and said one member of an Iranian militia had also been killed.

But a senior Iranian official denied that any Iranian targets had been hit.

"This is a lie and not true," said Mohsen Rezaee, the secretary of the Iran's Expediency Discernment Council -- an advisory body to Iran's Supreme Leader, according to the semi-official Iran Labor News Agency (ILNA).

"Israel and the US do not have the power to attack various Iranian centers and additionally, none of our advisory centers have been damaged," Rezaee added.

Hezbollah said that after the fall of the first drone, a second "explosive-laden drone" blew up before hitting the ground, causing damage to the building housing its media center, Hezbollah public relations official Mohammad Afif said, according to the Hezbollah-owned al-Manar TV.

Tensions between Israel and Iran have been increasing for weeks.

Three days ago, Israel's Prime Minister Benjamin Netanyahu made his strongest hint yet that Israel was responsible for a series of unexplained attacks on militia targets in Iraq in recent weeks.

During an interview on Israel's Channel 9 television Thursday, Netanyahu, who also acts as the country's defense minister, was asked whether Israeli forces "were acting in the whole region, including Iraq ... against the Iranian threat."

Netanyahu: 'We act in many arenas'

"We act in many arenas against a country which seeks to destroy us. Of course, I have given the security forces a free hand and the instruction to do what is needed to thwart these plans of Iran," Netanyahu said.

In that interview, Netanyahu accused Iran of "trying to establish bases against us everywhere, in Iran itself, in Lebanon, in Syria, in Iraq, in Yemen. I don't give Iran immunity anywhere."

The United States has added weight to the idea that Israel has opened up a new front by attacking sites in Iraq.

Two US officials told CNN the US government believes Israel was likely involved in a strike north of Baghdad in July, and likely targeted militia groups that have a close relationship with Iran.

The US officials also said the United States was looking at several possible scenarios that could involve Iran or its proxies carrying out an attack in retaliation.