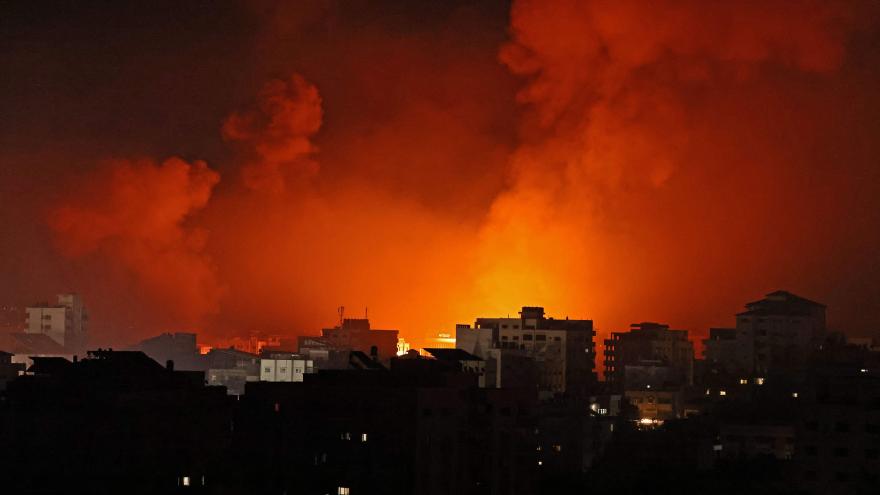 Smoke billows from a fire following multiple Israeli airstrikes in Gaza on May 16. - Mohammed Abed/AFP/Getty Images

(CNN) -- Israel bombed the house of Hamas' Gaza leader and obliterated a family's home in Gaza as Hamas launched more than 100 rockets towards Israel on Sunday, marking the deadliest day of the week-long conflict so far, according to data from the Palestinian Health Ministry in Gaza and Israeli authorities.

Two Israeli airstrikes in Gaza killed at least 43 Palestinians -- including eight children -- and injured 50 others, most of whom were women and children early Sunday, according to the Palestinian Ministry of Health.

Palestinian medical and civil defense teams said they rescued five children from the rubble on Sunday morning. Scenes of the rescue operation show a young girl with a bloodied head injury lifted from the wreckage by a team of paramedics. Her expression alternates between shock and horror.

The IDF said in a Twitter post on Sunday morning that Hamas' militant wing had fired 120 rockets between 7 p.m Saturday and 7 a.m. local time Sunday, of which 11 fell in Gaza. IDF spokesperson Zilberman added Sunday that they had targeted dozens of rocket launchers, with the ability to fire multiple rockets at a time.

Defense Minister Benny Gantz said in a Tweet on Saturday that "Israel has no interest in escalation, but is ready for any scenario," echoing an Israeli military official, who said on Friday that Israel is prepared to continue hitting "quality targets" for an "extended period of time." The Israeli Prime Minister Benjamin Netanyahu underscored that resolve on Saturday, saying it will "respond forcefully" in Gaza "until the security of our people is reinstated and restored," and said the country is trying to avoid civilian casualties from its strikes.

But civilian deaths continue to rise. With the latest casualties, the death toll in Gaza has climbed to a total of 188, including at least 55 children and 31 women, according to the Palestinian Ministry of Health. Since the beginning of the airstrikes on Gaza this week, at least 1,225 have been injured, with the number expected to rise, it said, as paramedics continue to carry out search operations.

The recent conflict began at the start of last week, fueled by controversy over planned evictions of Palestinian families in East Jerusalem and restrictions at a popular meeting point near the Old City. It has since escalated rapidly into one of the worst rounds of violence the area has seen since the 2014 Gaza War, which saw more than 2,200 Gazans killed during the fighting, approximately half of them civilians, including more than 550 children, according to a United Nations report.

Rioting and violent clashes between Arab and Jewish citizens have also spilled out across several Israeli cities the week, including Lod, Bat Yam and Acre, leading Netanyahu to warn against "lynching" by either community. And that violence has boiled over to the occupied West Bank, where on Friday, at least 11 Palestinians were killed by Israeli forces during violent clashes, marking the largest number of people killed in a single day in the West Bank in years, according to the Gaza-based Palestinian Health Ministry.

In a statement, UN Secretary General António Guterres said he was "dismayed" by the rising number of civilian casualties. "The Secretary-General reminds all sides that any indiscriminate targeting of civilian and media structures violates international law and must be avoided at all costs," the statement said.

Guterres' comments come as the UN Security Council is scheduled to meet on the violence Sunday. But with a cycle of sirens, bombs, injuries and deaths over the weekend punctuating nearly a week of violence, it remains unclear how those efforts will be received. The Biden administration, which has said its focus is on de-escalation and working with allies in the region on that goal, also sent US Deputy Assistant Secretary of State for Israel and Palestinian Affairs Hady Amr to Israel on Friday; the US blocked previous Security Council efforts to meet, preferring direct diplomacy on the conflict rather than discussion in an international forum.

US President Joe Biden spoke with both Netanyahu and Palestinian President Mahmoud Abbas on Saturday. In his call with the Israeli leader, Biden "reaffirmed his strong support for Israel's right to defend itself against rocket attacks from Hamas," and also expressed his concern for the Palestinian people. Abbas, in a readout after the phone call with the American President, called on him to intervene in putting an end to "Israeli attack on Palestinian people everywhere."

Early Saturday, an infant was the lone survivor in a house that was hit and destroyed in an Israeli airstrike hit in the al-Shati refugee camp, killing 10 members of the infant's family -- including eight children, according to the Palestinian News Agency WAFA. At least 20 other Palestinians were wounded after several nearby houses were damaged in the Israeli airstrike, it added.

Militants in Gaza responded to the airstrikes on the refugee camp on Saturday with rockets targeting the Israeli cities of Tel Aviv, Beersheba, Ashdod, and Sderot. A 55-year-old Israeli man was killed early Saturday afternoon after a rocket hit a series of buildings in a residential area in a Tel Aviv suburb called Ramat Gan, bringing Israel's death toll to 10, according to Israel's emergency service.

Shortly after, the Jala'a building -- which contained offices for international media outlets Al Jazeera and the Associated Press, among others -- was hit by an Israeli airstrike.

The AP said in a statement that they were "shocked and horrified that the Israeli military would target and destroy the building housing AP's bureau and other news organizations in Gaza," and called on the Israeli government, who says the building contained Hamas military intelligent assets to "put forward the evidence."

"This strike is an incredibly disturbing development," the statement added, concluding: "The world will know less about what is happening in Gaza because of what transpired today."