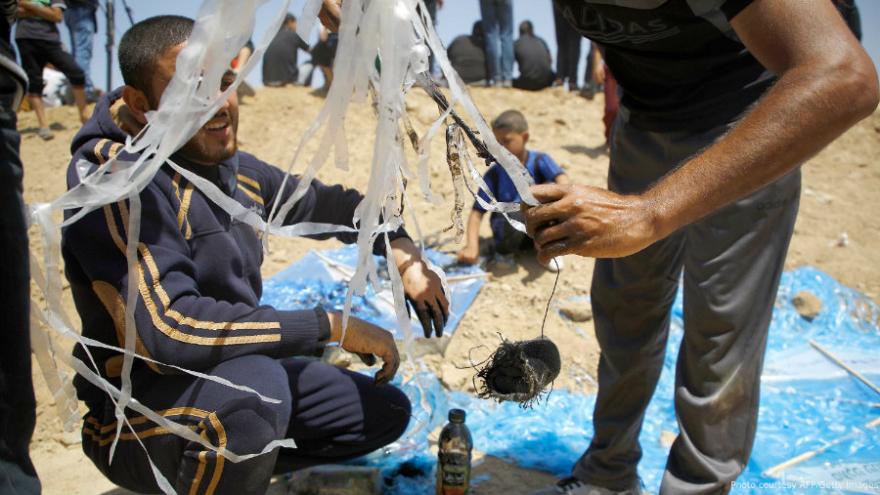 The airstrikes were aimed at two military compounds and a munitions manufacturing site, according to the IDF.

The strikes followed the launch of numerous kites and balloons from Gaza that were either carrying explosives or intended to start fires in southern Israel.

Israel has struggled to find an adequate way of dealing with the low-tech kites, which have sparked more than 400 fires and burned more than 6,000 acres of farmland, according to a spokesman for Israel's Foreign Affairs and Defense Committee.

The fires have done an estimated $2 million in damage, said Idit Lev-Zerahia, a spokeswoman for Israel's Tax Authority.

On Monday, CNN witnessed charred fields, blackened trees and remnants of kites in Kissufim, on the Israeli side of the fence with Gaza.

Firefighters there said they are battling between 20 to 30 blazes a day.

The IDF has increased its response in recent days, firing warning shots near Palestinians casting off the kites and targeting Hamas outposts near kite-launching sites.

In addition, three rockets were launched from Gaza toward Israel early Monday morning, the IDF said. Two landed in open areas, while a third landed in Gaza.

The use of kites by Gazan demonstrators has increased significantly in recent weeks, and is part of a months-long protest movement along the fence separating Gaza and Israel, in which more than 120 Palestinians have been killed.

Israel has been accused of using excessive force against the protesters, a charge the country's leaders have denied.

Israel claims Hamas, the militant group that controls Gaza, is orchestrating the protests.