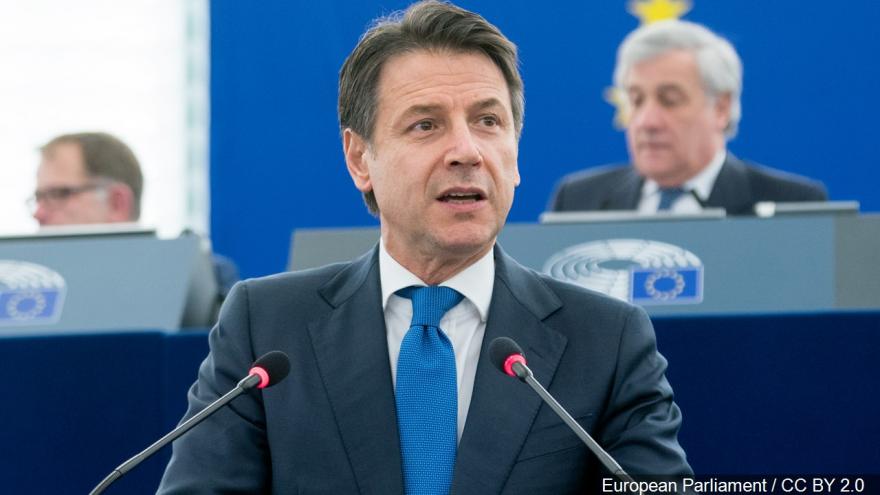 Addressing the Senate, Conte blasted Salvini for setting in motion a "dizzying spiral of political and financial instability" by essentially pulling the plug on the government. Salvini's right-wing League party sought a no-confidence vote against Conte earlier this month, a stunningly bold move for the government's junior coalition partner.

Conte, a lawyer with no political experience who was tapped to break a post-election stalemate last year, handed his resignation to President Sergio Mattarella at the presidential palace Tuesday night.

Mattarella, who is head of state, requested that Conte and the rest of the government stay on in a caretaker role, while he works in the coming days to determine whether to call new elections. Mattarella will first see if another viable coalition can be cobbled together.

Salvini, who sat next to Conte during his speech, smirking at times, declared, "I'd do it all again." He repeatedly kissed a rosary he slipped out of his pocket right after Conte rebuked him for associating "political slogans with religious symbols."

In the European Parliament election three months ago in Italy, as well as in current opinion polls, Salvini's League party has become the No. 1 political force among Italians. His crackdown on migrants, whom the party's voter base largely blames for crime, appears to be a huge factor in Salvini's climbing popularity.

Early elections would pull the plug on Parliament 3½ years ahead of schedule, perhaps as soon as late October. That would mean political campaigning in the middle of delicate budget maneuvers that will be closely monitored by the European Union. The EU is concerned about Italy's shaky finances and long stagnant economy, and it expects billions of euros in budget slashing that lawmakers running for office might be loath to make.

Should any early elections sweep Salvini into power, financial markets could be rattled by his Euro-skepticism.

Depicting himself in counterpoint to Salvini's often derogatory depiction of European Union rules, Conte said: "I tried in these 14 months to guide Italy's policy along the path of a critical pro-Europe line, but always oriented constructively."

While oft-bickering, the government made up of the anti-establishment 5-Star Movement and the rival League party reflected the results of Italy's 2018 election and aimed to "interpret the desires of citizens who in their vote expressed a desire for change," Conte said.

Despite the acrimony, Conte defended the government's support for Salvini's migrant crackdown, including stiffening fines to as much as 1 million euros ($1.1 million) for captains of humanitarian rescue boats who dock without permission and allow migrants ashore, as well as the seizure of such boats.

"I don't take back anything of what we did, that's not my habit," Conte said.

Hundreds of kilometers (miles) south, some 15 migrants of the nearly 100 kept aboard a Spanish rescue ship for nearly three weeks plunged into the sea near an Italian island to try to swim ashore. Salvini has refused to allow the vessel to dock, and conditions have been deteriorating on board.

Sicilian Prosecutor Luigi Patronaggio ordered the seizure of the Open Arms and the evacuation of more than 80 migrants aboard after meeting with port authorities as part of an investigation into possible kidnapping charges against Salvini for refusing to open the ports, the Italian news agency ANSA reported.

"Minister Salvini, I respect your religious faith," Renzi said, launching into a barb that played off their common first name, Matteo. "But if you believe in Chapter 25 of the Gospel, naturally by Matthew, 'I was hungry and you gave me to eat, I was naked and you dressed me,'" if you have these values, unblock those persons held hostable by your policies."

Salvini has taken to dangling a rosary and invoking the protection of the Virgin Mary in political rallies around the country, even though no election campaign is underway.

Conte said besides "risking offending the feelings of the faithful" in the predominantly Roman Catholic country, Salvini's showy use of religious symbols "darkens the principle of laity in a modern state."

Outside the Senate, a few groups of citizens rallied in support for the man they hoped would be the next premier. Some hoisted "Salvini for premier signs," others held 5-Star banners, while still others waved signs saying "We're with you, Conte."