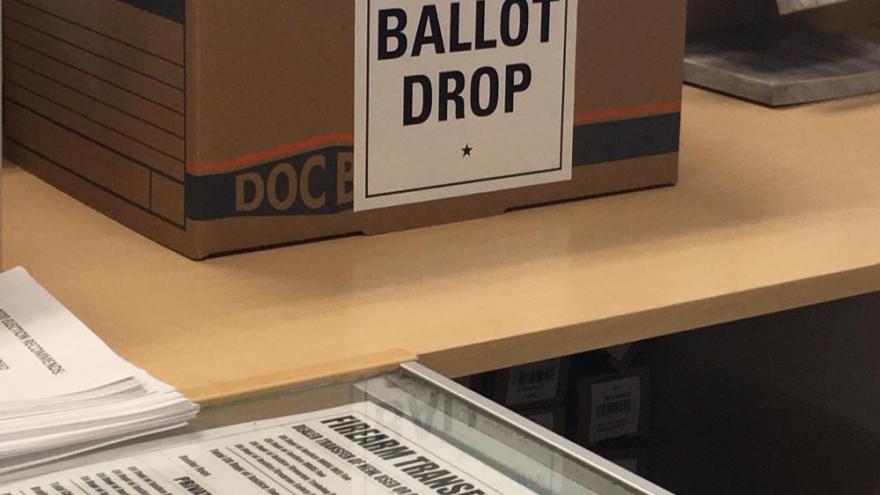 This photo obtained by CNN shows an unofficial ballot box at a sporting goods store in Fresno, California.

(CNN) -- The latest election controversy cropped up this week in California, where Republicans installed dozens of unauthorized ballot dropboxes that state officials say are illegal.

The coronavirus pandemic has led to historic interest in mail-in voting, but President Donald Trump and the GOP have spent months attacking the integrity of mail ballots and fighting in court against dropboxes. The California dispute is the latest flashpoint in this ongoing battle.

"Whether or not it is technically legal, it's extremely problematic for voters," said CNN election law analyst Rick Hasen, who is also a law professor at the University of California, Irvine. He said the unauthorized dropboxes were "not secure" and that the GOP was "asking for trouble."

What happened in California?

California is mailing ballots to all registered voters this year. Voters can mail back their ballots or return them at official dropboxes. There are anti-fraud safeguards built into the process to make sure ballots are filled out by the right voter, and that dropboxes are protected from tampering.

The California Republican Party installed dozens of unauthorized ballot dropboxes in at least four Southern California counties, where there are competitive House races this year. The party claims it did this as part of an above-board effort to legally collect and return people's ballots.

Election officials in affected counties expressed alarm about the "deceptive" boxes. California's governor, attorney general and secretary of state -- all Democrats -- condemned the dropboxes and sent cease-and-desist letters, telling the state GOP to remove the dropboxes by Thursday. As of late Tuesday, no response had been received, according to Attorney General Xavier Becerra's press office.

Why did Republicans do this?

Republicans claimed they merely wanted to use their makeshift dropboxes to collect people's ballots and return them to election officials. The dropboxes were spotted at churches and gun shops in more conservative-leaning areas, suggesting they were an effort to boost turnout among GOP voters where there are competitive House races.

"Republicans are in a tough spot," Hasen said. "On one hand, you have the President, who is criticizing vote-by-mail and says it is prone to fraud. On the other hand, Republicans in California has long relied on a strong vote-by-mail operation to get out the Republican vote."

But some Democrats claimed Republicans were trying to rig the election. California Gov. Gavin Newsom said the incident proved Republicans would "lie, cheat, and threaten our democracy all for the sake of gaining power," without providing evidence that the GOP planned to tamper with ballots. Republicans deny any wrongdoing and accused Democrats of hypocrisy.

Did Republicans break the law?

Yes, according to California Secretary of State Alex Padilla, a Democrat who is overseeing the election. His office sent a five-page memo to counties explaining their interpretation of the relevant state laws, which regulate ballot dropboxes and ballot collection efforts by third parties.

The memo also said Republicans violated laws on ballot collection, which is pejoratively called "ballot harvesting." California lets voters designate any "person" to return their ballot on their behalf, often a family member of a volunteer from a political campaign. But the GOP dropboxes eliminated this person-to-person part of the process, which is a key safeguard against fraud.

Is there an investigation?

Becerra is "prepared to take action to enforce state law, should it become necessary," his office said in the cease-and-desist letter state GOP leaders.

The Orange County district attorney's office said Monday that it "launched an investigation" into the unauthorized dropboxes. District Attorney Todd Spitzer, a Republican, said in a press release that he "will not tolerate anyone interfering with someone's ability to have their voice heard in our democratic process," and would evaluate whether criminal charges are warranted.

Fresno County Clerk Brandi Orth told CNN that she received videos from a voter of improper GOP dropboxes in her area, and that she referred them to the Fresno County district attorney.

How is Trump responding?

Trump has repeatedly undermined the integrity of the election and lied about the prevalence of voter fraud in California and other states. He falsely claimed ballot dropboxes are dangerous and lead to vote-rigging, and he waded into the California dispute Tuesday with two tweets.

"You mean only Democrats are allowed to do this? But haven't the Dems been doing this for years? See you in court. Fight hard Republicans!" Trump tweeted Tuesday night, inaccurately describing state laws, which allow any party to collect ballots, as long as it is done in-person.

And in an earlier tweet, Trump encouraged Republicans in two other reliably Democratic states to try similar tactics, saying, "New York and Illinois -- go for it!" While Trump seemed eager about the possibility of filing lawsuits about the dropbox situation in California, the Trump campaign and Republicans haven't been successful at stopping mail-in voting in the courts this cycle.

The next few days will determine if this dispute escalates into a massive political showdown, leads to a full-blown criminal investigation -- or if Republicans quietly decide to back down.

It's possible Republicans were just trying to test the waters of what they are legally permitted to do, like their recent efforts to send unauthorized poll watchers to voting sites in Philadelphia. Another more sinister possibility, experts said, is that they knew the dropboxes would cause issues, but are trying to sow chaos and weaken public confidence in the vote-by-mail process.

"I think imparting a coherent political strategy to this is a fool's errand," said CNN analyst Jessica Huseman, who covers voting rights and election administration for ProPublica. "I think it was just a way for them to stir the pot, and I don't know how effective it really was. Ultimately, the people who ended up holding the bag were Republican Party members, and nobody else."