'It's frustrating': Thousands of migrants sit in Mexico desperate for answers from the Biden administration 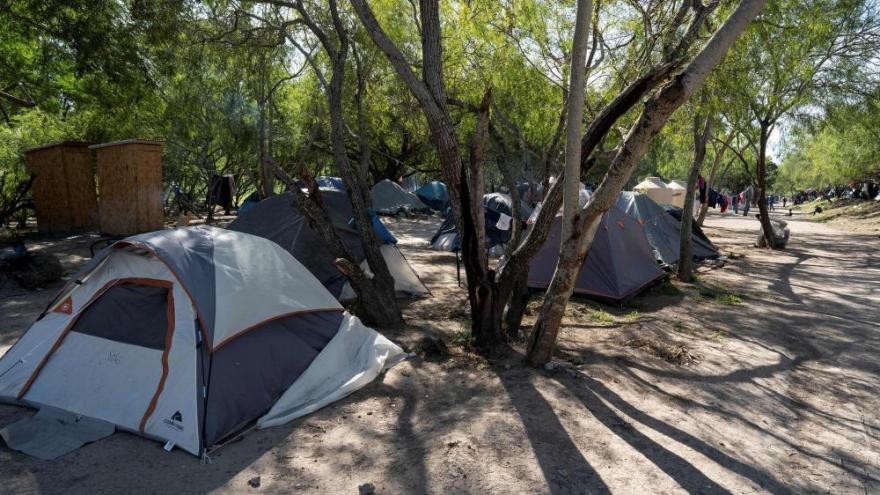 A view of tents belonging to migrants, in Matamoros, Tamaulipas state, Mexico, near to the border with the United States, on November 1, 2019.

(CNN) -- Within the span of a year and a half, a Cuban couple living on the US-Mexico border were repeatedly threatened, attacked and lost a baby after being assaulted, as they waited for their next immigration court date in the United States under a Trump-era policy.

There has been a presidential transition since they first arrived in Juarez, Mexico, to claim asylum in the US, but their lives remain the same.

"I have locks on the door. I'm threatened," said one of the Cubans, a 30-year-old who agreed to share his experience on the condition that CNN not use his name. "You can't imagine the state we're in. It's something that is so difficult." Las Americas Immigrant Advocacy Center, a group that represents people in the so-called "Remain in Mexico" program, put CNN in touch with the migrant.

The Biden administration moved quickly to begin dismantling former President Donald Trump's immigration policies. But the flurry of announcements in the first hours of President Joe Biden's presidency won't immediately change the situation along the US-Mexico border, where thousands of people wait in desperate conditions for refuge in the US. White House officials have warned that any policy changes will take time to implement, in part as a result of the challenges that arise in processing people at the border amid the coronavirus pandemic.

"These Trump policies are alive and well on the border ... it's frustrating," said Linda Rivas, an immigration attorney and director of Las Americas. "It's really weighing on people, weighing on their souls. What we saw our clients go through is the opposite of dignity."

Under Trump, migrants from Central America and other parts of the world who were seeking asylum at the US-Mexico border were forced to remain in Mexico until their immigration court hearings in the United States. That meant waiting months, if not years, in deplorable conditions and under the threat of extortion, sexual assault and kidnapping. Migrants can be easy identified based on their accents or attire and as a result, fall prey to gangs and corrupt authorities, among others.

While it's difficult to know exactly how many people are waiting to be admitted along the southern border, there are more than 22,700 cases pending in courts hearing these cases along the border, according to the Robert Strauss Center for International Security and Law at the University of Texas at Austin which released a report on the program.

The Cuban couple -- a husband and wife -- arrived at the US border in July 2019 after fleeing political persecution in their home country. The couple were eventually subject to the policy and have had to wait in Mexico as their case proceeds in the US immigration courts. Last February, the woman, 27, was attacked while pregnant and lost the baby, according to her husband.

Their attorneys have tried to take the couple out of the program so they can wait for their court date in the US, given the circumstances, but the couple has been returned to Mexico each time, including after an attempt last Friday.

Attorneys also asked officials to allow a Honduran woman who was allegedly raped while in Mexico into the US last week. After an hours-long interview with US Citizenship and Immigration Services, the woman and her 11-year-old son were returned to Mexico, according to Rivas.

The agency declined to comment, telling CNN: "As a matter of practice, USCIS does not comment on individual cases."

In his first hours in office, Biden moved to draw down the so-called "Remain in Mexico" program, which will have been in place for two years Friday, by stopping the enrollment of new migrants. Since October, more than 3,200 migrants have been admitted to the program, formally known as Migrant Protection Protocols, according to data obtained by CNN.

"It's really, really difficult for people that are desperate and in dire situations in Mexico," said Taylor Levy, an immigration attorney based in California who works with clients in Juarez. "These asylum seekers are extremely vulnerable in Mexico, more vulnerable than your average Mexican."

'Every day there's some new rumor'

Biden plans to announce executive actions that would establish a "fair but efficient asylum program" that includes ending the "Remain in Mexico" program, Esther Olavarria, deputy director of the Domestic Policy Council for immigration, said last weekend. But it remains unclear what happens to those who have already been subject to the policy, like the Cuban couple.

Kate Clark, senior director of immigration services for the Jewish Family Service of San Diego, said her office has been receiving around 50 calls daily from migrants trying to get guidance on what they should do next.

"We've generally been getting repeated callers asking the same questions in different ways to understand what the process is," Clark told CNN, adding that some people have called three to four times "with the hope that we're going to say something different."

Part of the reason behind the flurry of calls is rumors and misinformation circulating on social media. Some of those rumors have directed migrants to the ports of entry or advised them to set up email accounts to receive information from the government, according to attorneys.

"It creates hysteria that's not called for ... Every day there's some new rumor. Disinformation runs rampant," said Jodi Goodwin, an immigration attorney who represents clients forced to stay in Mexico. "Once you get them to understand that nothing is going to happen right away, then they get it."

The perilous conditions many families find themselves in has resulted in children crossing the border alone despite initially arriving with a parent or other relative.

As of this month, more than 700 unaccompanied children who had been waiting in Mexico with family as part of the Trump administration policy have crossed the US-Mexico border, according to the Office of Refugee Resettlement, which is tasked with the care of migrant children.

Unaccompanied children are exempt from the policy, which means children who cross the border are taken into custody by the Department of Homeland Security and referred to the Department of Health and Human Services. While in care, case managers work to place a child with a sponsor in the United States, like a parent or relative.

While the Trump administration came to increasingly rely on the "Remain in Mexico" program, the pandemic also gave way for officials to pull another lever -- invoking a public health law, known as Title 42, that allows for the swift removal of migrants apprehended at the US-Mexico border. The order, which remains in effect, has made claiming asylum exceedingly difficult, if not impossible.

"The border is closed to families and single adults, including those seeking refuge from horrific persecution and violence," said Lee Gelernt, an attorney for the American Civil Liberties Union, which is challenging the public health order. "We don't expect the Biden administration to be able to process everyone in the first week, but we need a signal very quickly that he is going to open the border and get rid of Title 42." The Biden administration has not yet said how it intends to proceed with Title 42.

The new administration has staffed up with people who have extensive backgrounds in immigration law and policy -- a nod to the challenges facing officials on the border as the administration tries to turn the page.

During the transition, incoming officials recognized that it would take time to install safety protocols and address other logistical issues, like processing, before opening the US-Mexico border back up, according to a source involved in the discussions.

Alejandro Mayorkas, whose nomination to serve as head of the Department of Homeland Security will be voted on Monday after a Republican filibuster was broken Thursday, is expected to make addressing the population of people waiting in Mexico a priority.

"He clearly understands the impact of these policies on real people," said a source close to Mayorkas. "That isn't to say this isn't really, really hard, but he knows this isn't something that can be ignored."

Nongovernmental organizations have also brainstormed how to retrofit their resources to assist asylum seekers who have been waiting, for example by using the domestic refugee resettlement network to provide case management and integration services.

"The administration understands they're going to have a messaging crisis for a lot of reasons and they're wanting to mitigate that and utilize systems already in place," said another source involved in discussions.

But patience is wearing thin for those made to wait years in Mexico.

"I don't know if this president will come through on his policies but at least we might have a better future," the Cuban migrant told CNN. "We're very, very desperate. We've been here for a long time."