It's not concussions that cause CTE. It's repeated hits, a study finds 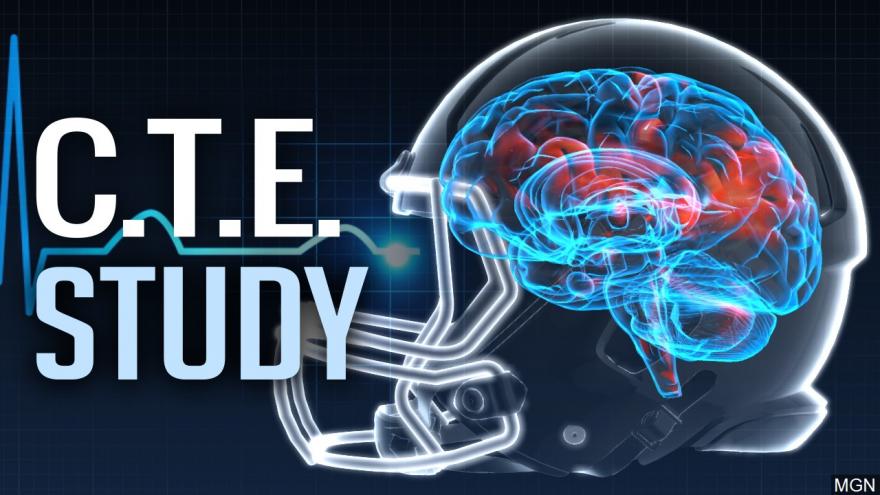 (CNN) -- The neurodegenerative disease chronic traumatic encephalopathy can start early and without any signs of concussion, according a study released Thursday.

The Alzheimer's-like disease has been most commonly associated with former professional football players, but has also been detected in military veterans, including many who have been exposed to roadside bombs and other types of military blasts.

Previous studies have shown that repetitive hits to the head -- even without concussion -- can result in CTE, but scientists said this is the most definitive study to date to find this connection.

"Now we have both the scientific proof, the pathologies to support it, and all the evidence to show that concussion is not linked to long-term neurological disease," said Dr. Lee Goldstein, one of the authors on the study, published in the journal Brain.

Goldstein and his colleagues from Boston University evaluated the brains of four deceased athletes, ages 17 and 18 years old. All four had died within a day to four months of receiving some sort of sport-related head injury and had a history of playing football.

In all four brains, there were already changes to the brain that could be indicators of CTE, including leaky blood vessels and abnormal buildups of the protein tau.

Some of these changes in the brain occurred as early as 24 hours after injury. Goldstein said one of the cases could be diagnosed as early-stage CTE.

What researchers found under the microscope was striking, said Goldstein. "We're seeing the earliest pathology soon after one of these injuries," he said.

The four specimens were compared to brains from four other athletes of similar age who had not experienced any recent head trauma before death. The brains in this group had no changes in their pathology.

Concussion 'not telling you anything about the brain'

While it seems likely that the recent head injuries could be the source of the brain changes, Goldstein said, "we can infer it, but we can't prove it."

To try and understand the source of the changes, Goldstein and his colleagues mimicked the experiences of the human brains in mouse models, by exposing mice to repeated head trauma, like that in football, and single blast head trauma, similar to military combat.

The researchers found similar pathologies in both the mouse and human brains, regardless of the type of blast exposure they had experienced. Goldstein and his colleagues also measured the mice for concussion-like symptoms by testing their arousal and balance. They found that even without concussion, the mice exposed to the head trauma still exhibited changes in the brain.

Concussion is "not only not correlated, we can decouple it," said Goldstein. He said that concussion itself is not the injury, but rather the symptoms experienced from injury, such as memory impairment or loss of balance.

But not everyone experiences these symptoms, and so "by looking at concussion, it's not telling you anything about the brain or CTE," he added.

Using animal models and computer modeling, Goldstein and his partners were able to see progression of the disease, finding that as tau built up, it began to work its way through the brain.

Currently, the only way to diagnose CTE is with an autopsy after death. Researchers are working on finding biomarkers and other indicators to help detect it in the living, with further hope that such findings can help lead to potential treatments.

Goldstein said that while the new work advanced understanding of the mechanisms underlying CTE, it's not clear how frequently people experience these types of changes in the brain. "We don't know how to weight the information," he said.

But the risk of CTE is worrisome enough that children shouldn't be playing tackle football, said Pro Football Hall of Famer Nick Buoniconti. The legendary Miami Dolphins player suffers from dementia and has been diagnosed with probable CTE.

"Now, CTE has taken my life away. Youth tackle football is all risk with no reward," he said.

Buoniconti and Goldstein joined other former players and researchers to launch the Concussion Legacy Foundation's Flag Football Under 14 initiative on Thursday. The campaign aims to warn parents about the dangers of football's repetitive hits.

'It starts early. It persists'

"I think [this research] really reinforces, as we have suspected, [the idea] that it's not concussion per se, it's the exposure to multiple head impacts," said Dr. Julian Bailes, the director of neurosurgery and co-director of NorthShore University HealthSystem Neurological Institute, who was not involved in the study. Bailes was one of the first researchers to connect repeated head trauma to neurological damage in football players.

A recent evaluation from Boston University's CTE Center found that 110 of 111 former NFL players had been diagnosed with the disease. However, there is a potential bias, as many of the studied brains came from players who experienced clinical CTE symptoms when living, such as memory loss, rage and mood swings.

In addition, scientists are also trying to unravel the role other factors play in the disease -- factors such as genetics, how early someone is exposed to head trauma, and how long they've been exposed to trauma.

While it's not clear how common CTE is, Goldstein said the brains examined in the new study are a warning.

"CTE develops early, soon after injury. It doesn't take years, or decades. It starts early. It persists. And all of our evidence to date shows it's progressive."

Goldstein hopes policy makers, professional players and parents heed the warning that CTE can develop early -- and that focus on concussions doesn't reduce the risk. Instead he said it was important to focus on ways about how to reduce total overall exposure to repeated hits, such as limiting head-to-head contact.

"Most hits to the head are not concussive ... but no one is paying any attention to them," said Goldstein.

But, he remains optimistic for the future of football.

"You can play football differently. There are all sorts of ways to do it more safely," he said.