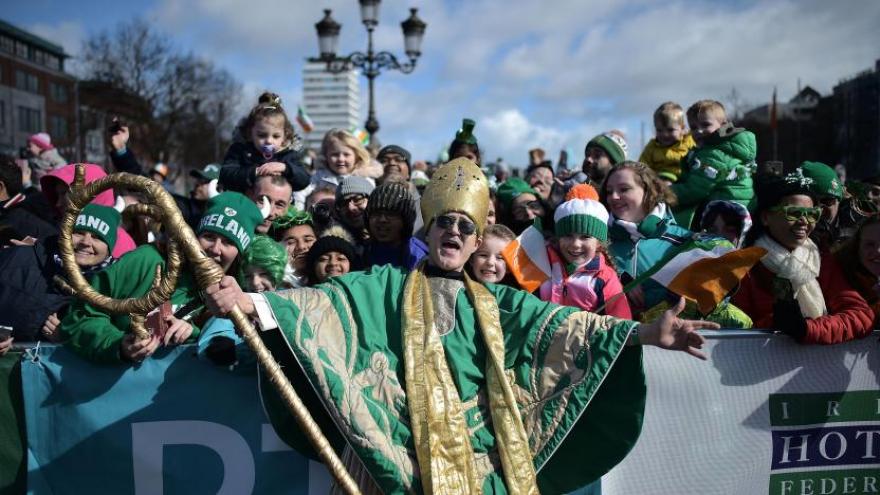 (CNN) -- Due to the Covid-19 pandemic, there will be no vibrant, green parades, group celebrations, or religious coming-togethers for a second year in a row in Ireland today.

The country is confined to the strictest level 5 lockdown with a 5-kilometer (3.1-mile) travel limit. And while we will still be adorned in shamrocks, and landmarks across the world will turn green and fly the Irish flag, we have a little more time on our hands than usual, and there is something that we need to get off our chests ...

On the Emerald Isle, we say St. Patty's about as much as we utter "top O' the mornin to ye" while eating corned beef and cabbage alongside a leprechaun minding a pot of gold and wearing a four-leaf clover in our lapel -- i.e., absolutely never.

(Correction: We say "good morning"; we like bacon or ham with our cabbage to make it nice and salty; we stay well away from leprechauns as they are vicious little creatures; and the three-leaf shamrock is Ireland's national flower with St. Patrick using it as a metaphor for the Holy Trinity.)

It grinded Marcus Campbell's gears so much he created PaddyNotPatty.com to help set the record straight, likening the use of Patty to the sound of "nails on a chalkboard."

"Paddy is derived from the Irish, Pádraig, hence those mysterious, emerald double-Ds," Campbell writes on his site.

"Patty is the diminutive of Patricia, or a burger, and just not something you call a fella (a man). There's not a sinner in Ireland that would call a Patrick, 'Patty.'"

In recent years, "#PaddyNotPatty" has trended on social media in a bid to inform those across the Atlantic about the patron saint, who is credited with bringing Christianity to Ireland as well as, according to legend, driving the snakes into the sea.

One Twitter user wrote: "My annual PSA ... This St. Patrick's Day, please remember it's Paddy not Patty. Unless you happen to be celebrating St. Patricia's Day in March which would be a little weird as her feast day is August 25th."

Another added: "The annual reminder. Irish people use Paddy to shorten Patrick because the Irish version of the name is Pádraig. And if the Irish are telling you it's Paddy, it's Paddy."

As Irish Prime Minister, Taoiseach Michael Martin, gets set for the annual March 17 meet-up (albeit this year, virtually) with US President and proud Irish American Joe Biden (whose ancestors hail from Ballina in County Mayo), does it really matter what the day is called if so many people get enjoyment from celebrating Irish heritage? And with the population of Ireland currently standing at 4.9 million, while 34.7 million US residents claim Irish ancestry, are the #PaddyNotPatty brigade wasting their breath?

"I don't think it bothers anybody here (in the US) that Patrick is not referenced properly," he told CNN.

"Saying Patty's Day or Paddy's Day is not meant to be malicious or disrespectful, but just a shorthand way to acknowledge the holiday.

"It doesn't really matter as long as people have a great time celebrating Ireland! Political correctness does not extend to St Patty's Day!"

However, like Savage, he said it doesn't bother him.

"I poke fun at my friends here who might call it St Patty's Day, but it's not a big deal," O'Sullivan said.

"It's great to have so many people in the US talking about their love of Ireland and their connections to Ireland every March 17th and that's all that really matters."

CNN also reached out to arguably Ireland's second most successful export to the US, U2's Bono, but he has yet to return a request for comment.