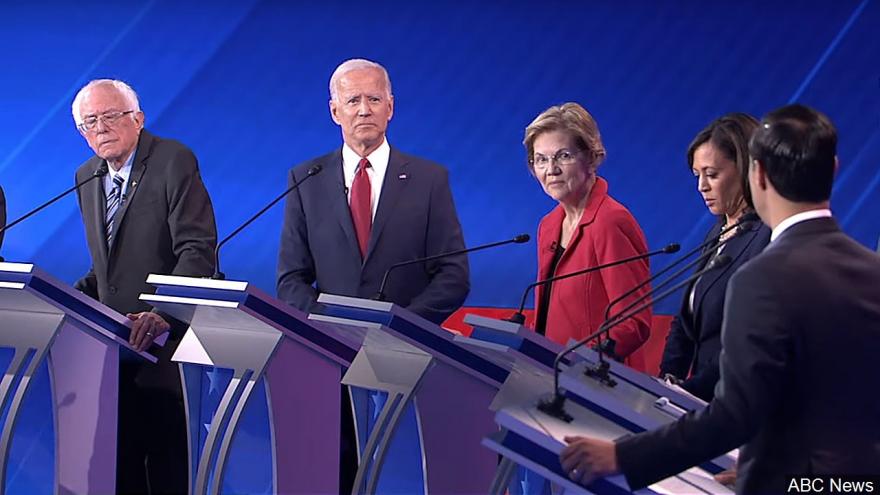 (CNN) -- We have less than a month until the primary season, and it's becoming more apparent that former Vice President Joe Biden and Sen. Bernie Sanders of Vermont are the candidates to beat. It's not just that they are Nos. 1 and 2 in the national polling. It's that each holds a lead on the two most important metrics beyond the polling: fundraising and endorsements.

Sanders reportedly pulled in about $34.5 million in the fourth quarter of 2019, which makes for a total sum of nearly $100 million over the 2020 campaign. No one else is even close. His nearest competitor (former South Bend, Indiana, Mayor Pete Buttigieg) is closer to $75 million for the year, according to self-reports.

Those who lead in fundraising at this point often win. In primaries in which an incumbent is not running in the given primary, 9 of 14 leaders at this point have gone on to win the nomination. Even when a candidate is trailing in the national polls (like Sanders), the leader has won 3 out of 5 times. This includes candidates like Democrat Bill Clinton in 1992 and Republican Mitt Romney in 2012.

Biden's fundraising is not anywhere near as strong as Sanders'. He took in $22.7 million this past quarter and about $60 million in the primary so far.

Biden, though, does significantly better in endorsements. He has 33 endorsements from members of Congress and governors. He scored his latest endorsement from Rep. Abby Finkenauer of Iowa this week, and he's the only candidate to get a congressional or gubernatorial endorsement in the last month. His closest competitor (Sen. Cory Booker of New Jersey) has only 13 endorsements. Sanders has a mere six.

Dating back to 1980, endorsement leaders at this point have a strong track record of winning primaries. They've gone on to win the nomination 10 of 14 times. When a candidate like Biden leads in the polls and endorsements, they've won 7 of 9 nominations.

It's not entirely clear whether fundraising or endorsements is a better indicator of future success. The success rating in predicting winners is fairly similar. Moreover, we can run statistical equations and find that these two factors are about equally predictive when you take into account the size of the edge the leaders have over the competition.

Interestingly, there aren't a lot of primaries that are like the one we're currently in. Usually, the candidate ahead in endorsements is the same candidate ahead in fundraising. There have been only four times when that wasn't the case since 1980. In those cases, the leader in fundraising won the nomination once (Michael Dukakis). The leader in endorsements won twice (Ronald Reagan in 1980 and John McCain in 2008). One time someone else took the nomination (Donald Trump in 2016).

Now, Biden does have an edge over Sanders for the nomination because he is in a better polling position. You can see that to a degree in the statistics above. Although the sample sizes are small, candidates ahead in endorsements and the polls have won 78% of the time. Candidates ahead in fundraising and not the polling have won 60% of the time.

And as I have stressed over and over again, early polling actually does a fairly good job of predicting winners and losers. Biden is clearly ahead there, with Sanders a bit behind. The fundamentals of fundraising and endorsements merely reinforce that fact.

CORRECTION: This story has been updated to reflect the correct year candidate Bill Clinton was trailing in the national primary polls and won the primary.