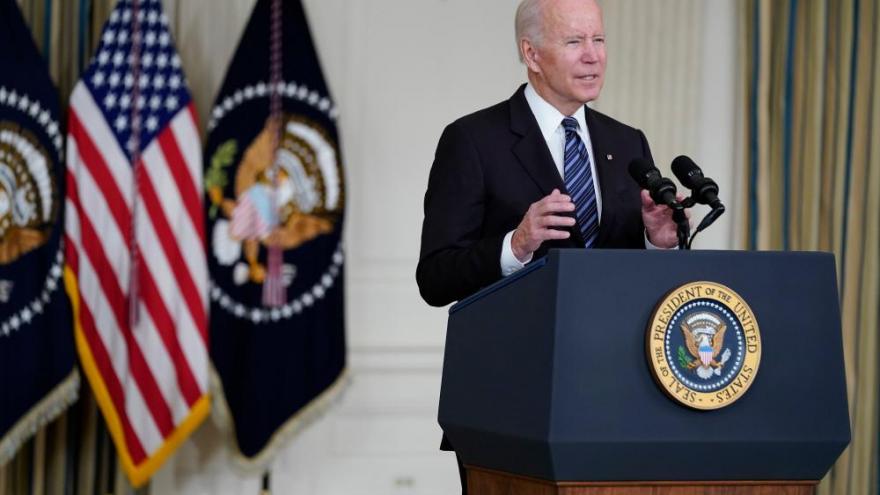 President Joe Biden takes his sales pitch for the newly passed bipartisan infrastructure deal on the road Wednesday, highlighting the effect of the bill on supply chains, hours after new inflation statistics revealed that America's prices are surging more than they have in 30 years.

(CNN) -- President Joe Biden took his sales pitch for the newly passed bipartisan infrastructure deal on the road Wednesday, highlighting the effect of the bill on supply chains and acknowledging Americans' concerns about rising prices -- hours after new inflation statistics revealed that US consumer prices are surging more than they have in 30 years.

While the Biden White House has long sought to assuage national worries about inflation amid America's economic recovery from the Covid-19 pandemic, the President on Wednesday acknowledged that rising consumer prices are "one of the most pressing economic concerns of the American people -- and it's real."

The President said the administration is prioritizing "getting prices down," "making sure our stores are fully stocked" and getting a lot of people back to work while tackling these two above challenges I mentioned."

Data released by the Bureau of Labor Statistics on Wednesday indicated that US consumer price inflation surged higher again in October. Over the past 12 months, prices climbed 6.2% -- the biggest increase since November 1990.

After stripping out food and energy prices, which tend to be more volatile, the index rose 4.6% over the same period, the biggest jump since August 1991.

Speaking from the Port of Baltimore late Wednesday afternoon, Biden told the audience that "everything from a gallon of gas to a loaf of bread costs more. And it's worrisome, even though wages are going up."

"(O)n the good side, we're seeing the highest growth rate in decades, the fastest decrease in unemployment ... since 1950 ... but we've got problems, too," he continued. "Many people remain unsettled about the economy and we all know why. They see higher prices. They go to the store ... or online and they can't find what they always want and when they want it. And we're tracking these issues and trying to figure out how to tackle them head on."

Biden cited specific provisions in the newly passed infrastructure deal -- which he will sign into law on Monday -- that aim to address some of the pressure points leading to inflation. He also pointed to specific funding that will aid ports -- like the one he spoke from in Baltimore -- and ease supply chain issues.

"It's going to modernize our ports with $17 billion dollars in investment. ... We're going to reduce congestion. We're going to address repair and maintenance backlogs, deploy state of the art technologies and make our ports cleaner and more efficient. And we're going to do the same with our airports and freight rail," the President said.

The President said he'd received personal assurances in a recent meeting with the heads of leading retailers and freight movers that shelves will be stocked for the holiday season.

"Yesterday, ... I spoke to the CEOs of the major retailers, Walmart, Target -- and the leading freight movers, FedEx and UPS. They assured me that the shelves will be stocked in stores this holiday because they signed on a 24/7 (operations)," Biden said.

The new set of immediate and short-term actions are aimed at alleviating supply chain issues at the nation's ports, waterways and freight networks as the administration takes steps to implement the infrastructure bill.

The new actions include flexibility for port grants through the Department of Transportation to solve supply chain disruptions, funding for a pop-up container yard project underway at the Port of Savannah, a $420 million grant program for ports and marine highways that will be launched within the next 45 days, and identifying coastal and waterway projects for $4 billion in funding for US Army Corps of Engineers construction.

It will also prioritize identifying key US ports of entry for $3.4 billion in modernization and expansion projects within 90 days and open competition for $475 million in port infrastructure grants through the bipartisan bill within 90 days.

In a statement released earlier Wednesday to address the stark inflation statistics, Biden said that some "price increases reflect the ongoing struggle to restore smooth operations in the economy in the restart."

"And I want to reemphasize my commitment to the independence of the Federal Reserve to monitor inflation, and take steps necessary to combat it," he added.

A senior administration official had told reporters on Tuesday that the Baltimore visit would be "an illustrative example" of the private-public partnership at the nation's ports.

Biden's stop in Charm City took place near the 127 year-old Howard Street Tunnel, which "only accommodates single stack containers right now." It "will be expanded to accommodate double stack containers from the Port of Baltimore all the way out to the Midwest," in a project co-funded by federal, state and private partners, the official said.

"It's an example of the kind of investments that are needed for both the private- and public-sector side. It's also an illustration that the co-funding in the bipartisan infrastructure plan incentivizes the private sector to make these kinds of long-term investments as well," the official added.