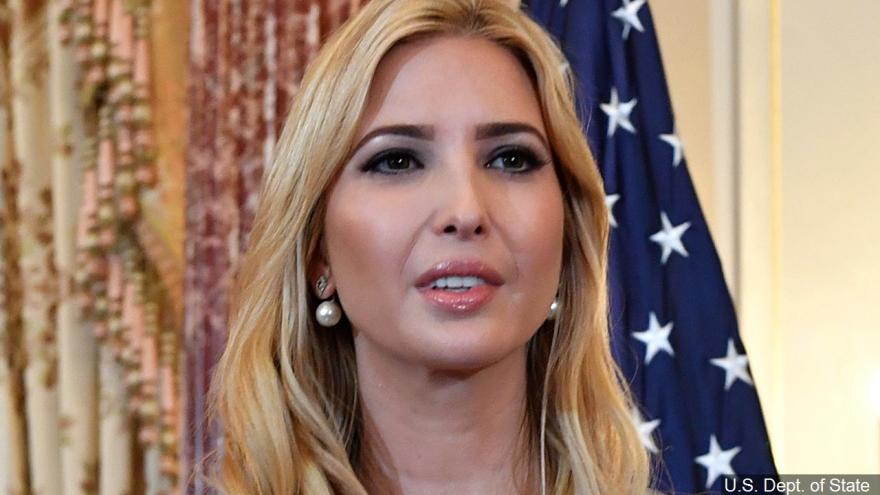 Ivanka Trump - First Daughter and Advisor to the President of the United States, Photo Date: 6/27/2017

RABAT, Morocco (AP) — Ivanka Trump on Friday echoed her father's view that the House impeachment investigation is an attempt to overturn the 2016 election. But, in an interview with The Associated Press, she parted ways with President Donald Trump by calling the identity of the impeachment whistleblower "not particularly relevant."

The Republican president and some of his allies lately have been pressing the news media to publicize the whistleblower's name. Trump has also tweeted for the individual to "come forward." But Ivanka Trump said the person's motives were more important, though she declined to speculate on what they may have been.

"The whistleblower shouldn't be a substantive part of the conversation," she told the AP, saying the person "did not have firsthand information."

Of the individual's identity, she added that, "to me, it's not particularly relevant aside from what the motivation behind all of this was."

In a wide-ranging, 25-minute interview, Ivanka Trump also addressed her family's criticism of Democrat Joe Biden and his son Hunter, whether she wants four more years in the White House and the possible future sale of her family's landmark Washington hotel.

She said she shares her father's oft-repeated view that the impeachment investigation is about "overturning the results of the 2016 election." House Democrats counter that the inquiry is about whether Trump abused his office by putting his political interests first.

"Basically since the election this has been the experience that our administration and our family has been having," she said of persistent criticism of the president. "Rather than wait, under a year, until the people can decide for themselves based on his record and based on his accomplishments, this new effort has, has commenced."

"But to us, it's really been like this from the beginning," she said.

Asked about the central thrust of the inquiry, which is that her father tried to pressure a foreign government to investigate his political foes and used military aid as leverage, she batted away the question.

"The president put forth a transcript," she said, referring to a rough account of the president's July phone conversation with Ukraine's president. "So everything is in the transcript."

She said she hasn't been reading transcripts of the depositions current and former administration officials have given to House impeachment investigators.

Ivanka Trump also said she doesn't see impeachment as a low point for the president. She said her father is helping all Americans.

"I think when Americans are winning, we're feeling great, so I wouldn't consider it a low point," she said. "I think Americans are prospering like never before."

She noted that the whistleblower was not among administration officials who heard the president ask Ukraine's leader during a July 25 telephone conversation to investigate Biden, a former vice president who's a leading contender for the 2020 Democratic presidential nomination to challenge Trump.

While her brothers Don Jr. and Eric have been vocal critics of the impeachment inquiry, Ivanka Trump has largely stayed out of the discussion. She recently tweeted a quote from Thomas Jefferson about the "enemies and spies" who surrounded him and added that "some things never change, dad."

In the interview, she again placed her father in august company when it comes to being the target of criticism, saying, "This has been the experience of most."

"Abraham Lincoln was famously, even within his own Cabinet, surrounded by people who were former political adversaries," she said.

She rejected any suggestion that her own family has been profiting off the presidency even as President Trump and his allies have criticized the involvement of Biden's son with a Ukrainian oil venture when Biden was vice president.

Hunter Biden served on the board of a Ukrainian gas company at the same time his father was leading the Obama administration's diplomatic dealings with Kyiv. Though the timing raised concerns among anti-corruption advocates, there has been no evidence of wrongdoing by either the former vice president or his son.

Still, Ivanka Trump said the Bidens had "created wealth as a derivative" of public service while her family had made its money in business before her father became president.

Good government groups, however, have criticized the president for unethically mixing official business with promotion of his own interests.

Trump is the first president in modern history who has not separated himself from his business holdings. He makes frequent trips to his for-profit golf clubs, collects dues at his members-only properties and hosts fundraisers and foreign delegations at hotels that bear his family's name.

A New York state judge this week ordered President Trump to pay $2 million to an array of charities as a fine for misusing his own charitable foundation to further his political and business interests. The penalty came after Trump admitted to a series of abuses outlined in a lawsuit brought against him last year by the New York attorney general's office.

Ivanka Trump said she hasn't been involved in discussions about the possible sale of the president's landmark Washington hotel after nearly three years of ethics complaints and lawsuits accusing him of trying to profit off the presidency. She led the acquisition and development of the hotel she called "my baby" a few blocks from the White House.

But she said a possible future sale "should satisfy the critics."

She is wrapping up a three-day visit to Morocco, where she has been promoting a U.S. program to help empower women in developing countries, including by encouraging governments to change laws and practices that prohibit them from owning property.

She was warmly received in rural Morocco by women who had recently bought or inherited land, with one woman kissing her hands. Morocco recently updated its land rights laws, and Ivanka Trump on Thursday witnessed the signing of documents to implement the changes.

In the AP interview, Ivanka Trump said she had yet to decide on what role she will play in her father's re-election campaign.

On the question of whether she also wants another four more at the White House, the mother of three said the answer would largely depend on the needs of her children.