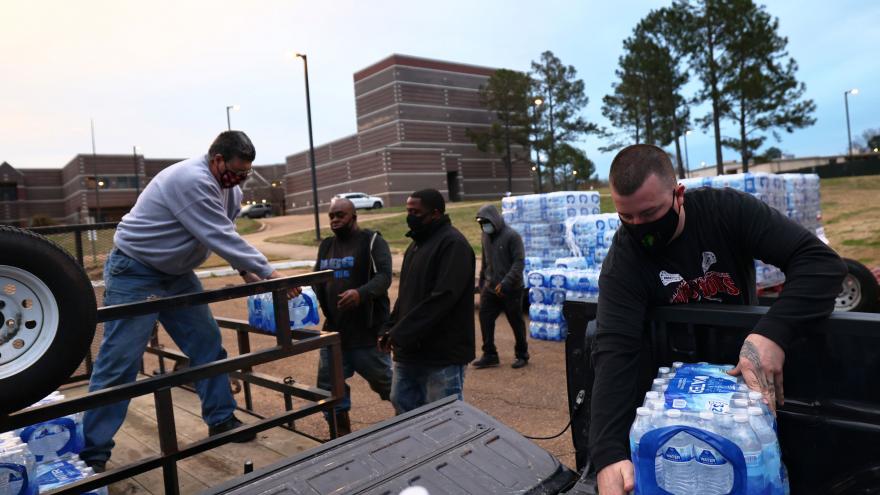 Packages of bottled water brought from the Onondaga Nation Reservation in Western New York are unloaded at a water distribution site on March 5, 2021 in Jackson, Mississippi. - Michael M. Santiago/Getty Images

(CNN) -- After more than two weeks without a drop of water, one Jackson, Mississippi, restaurant is finally back open for business.

"It has been depressing, coming into work thinking we're going to open again, we get a drip of water, then it's gone," Sal & Mookie's manager Brandy Fields told CNN affiliate WAPT.

In the aftermath of brutal winter storms that pounded parts of the US, thousands of Jackson residents and businesses faced a similar reality: no running water.

The city had to provide "flushing water" to residents while distributions of water bottles continue across Jackson.

Jackson officials say they're heading in the right direction and progress is being made.

"I'm truly grateful for our residents," Jackson Mayor Chokwe Antar Lumumba wrote on Twitter Friday. "Their resilience throughout this crisis has inspired me beyond words."

More than 100 water main breaks and leaks were reported throughout the city, officials said last week, at least 70 of which have been repaired.

According to the latest report from the city, less than 1,000 connections -- often the points where pipes at businesses and homes connect to the main water supply -- are still affected and they are mostly in "small pockets of south Jackson."

During a news conference Friday, Public Works Director Charles Williams estimated that "less than possibly 5,000 customers" were still without water.

In the latest report, the city said water pressure is now up to 87 psi -- or pounds per square inch, used to measure water pressure -- while officials say they're working toward a goal of around 90 psi at one plant and around 80 at another. During last month's frigid temperatures and fierce storms, the psi dropped to about 37.

City officials added they're also seeing progress in filling the tanks. Once those tanks reach a certain level, the city would be able to begin sampling and make a determination on whether boil water notices should stay in place.

According to the most recent report, the city received permission to start the sampling process of the well water system on Friday.

The city also announced last week they were seeking $47 million from the state to improve water infrastructure. The Jackson City Council held a meeting to discuss the specific request, as well as other revenue streams.

The weather conditions "emphasized the critical need for immediate repairs and improvement to [the] water distribution system," he wrote.

According to the mayor, that funding would be used to improve the water plants and distribution lines.

But during his news conference, Williams said that regardless of whether the state approves the request, the city infrastructure requires more funding sources to sustain improvements in the future.

"Even if we were to get the $47 million, that's not going to solve all the problems we have," Williams said. "We have a bunch more problems, and you're gonna have to find a steady revenue in order to satisfy them."