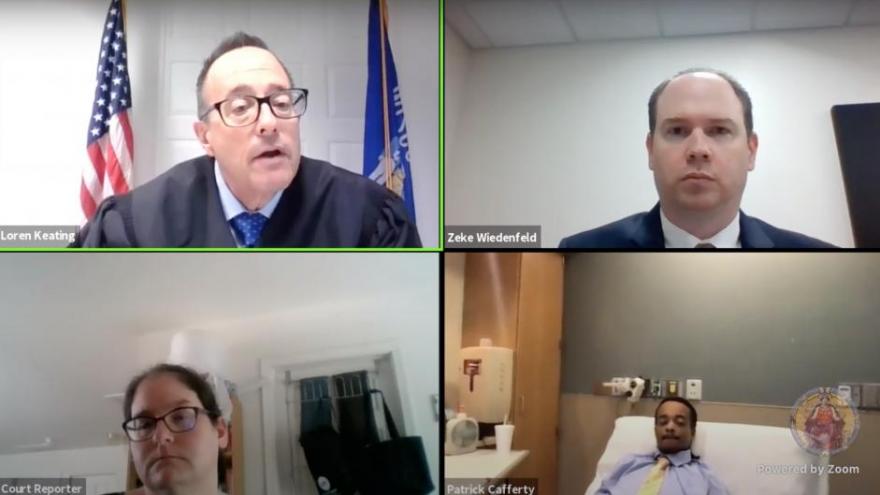 Jacob Blake, the Kenosha, Wisconsin, man shot seven times in the back by an officer , appeared from his hospital bed via video during his first court appearance Friday.

(CNN) -- Jacob Blake, the Wisconsin man who was shot seven times in the back by an officer as Kenosha police attempted to arrest him, appeared from his hospital bed via video during his first court appearance on unrelated charges Friday.

Blake is accused of criminal trespass, third-degree sexual assault and disorderly conduct. The charges were prior to and unrelated to the shooting incident that left him injured.

Blake wore a blue dress shirt and a yellow tie during the hearing.

He spoke briefly to the judge when asked if he understood the charges against him. When asked if he had any questions Blake responded, "at the moment, no I don't."

His attorney, Patrick Cafferty, submitted not guilty pleas for all three of the charges against Blake.

The judge approved a $10,000 signature bond for Blake, in addition to the $500 cash already in place as bail. Blake is allowed to leave the state only for medical treatment.

Blake has been left paralyzed by the shooting. He was initially in the intensive care unit, but his condition has improved, his family has said.

He is scheduled for another court appearance on October 21.

Blake, 29, was shot August 23. A video clip of the incident shows an officer shooting Blake several times as he tries to enter the driver's side door of an SUV. His three children -- 3, 5 and 8 -- were in the car at the time.

Protests erupted after a video of the shooting began circulating on social media and have continued for almost two weeks.

The Wisconsin Department of Justice Division of Criminal Investigation, which is leading the shooting investigation, has said that Blake admitted he had a knife in his possession and law enforcement agents recovered one from the driver's side floorboard of his vehicle.

Two officers have since been placed on administrative leave.