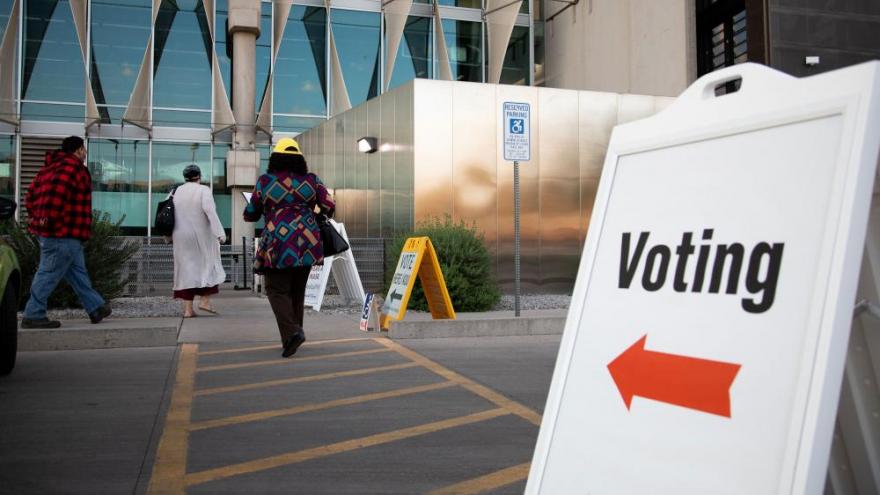 (CNN) -- Election officials in Arizona could face criminal charges if a noncitizen registers to vote on their watch. In Iowa, a law enacted last year makes it a felony for election clerks to willfully buck state election laws. And in Florida, election supervisors face fines of up to $25,000 for leaving a ballot drop box unattended.

Across the country, election administrators face a growing number of punishing new laws as Republican lawmakers move to restrict ballot access after record turnout in the 2020 election and relentless false allegations by former President Donald Trump and his allies that widespread voter fraud cost him a second term.

This year alone, lawmakers have introduced 16 different bills in eight states that create new criminal or civil penalties for functions associated with running elections, said Will Wilder, who works on voting rights at the left-leaning Brennan Center for Justice.

Taken together with the threats and harassment election officials have faced and other laws that make it easier to remove them from their jobs, "it all adds up to an attack on professionalized election administration," he said.

The new penalties in Arizona spring from a controversial law signed earlier this year that requires voters to prove their citizenship to cast ballots in a presidential election.

First, a bit of background: Arizona is the only state that requires voters to prove citizenship when they vote -- an outgrowth of a 2004 ballot measure in the state. (A handful of other states have similar laws on the books, but they have not been enforced.)

The US Supreme Court in 2013, however, struck down Arizona's proof-of-citizenship provision, saying that --while the state can set eligibility rules for its elections -- federal law requires the state to accept the federal voter registration form for federal elections. That form requires voters to attest that they are US citizens, but they don't have to provide documents proving their citizenship.

This resulted in a bifurcated system in Arizona with a separate class of so-called "federal-only" voters who could cast ballots only in races for US House, Senate and the White House.

In a letter explaining his support for the new law, Arizona Gov. Doug Ducey, a Republican, said a growing number of federal-only voters are participating in state elections. "Election integrity," he said, "means counting every lawful vote and prohibiting every attempt to illegally cast a vote."

This all comes against the backdrop of the increasing competitiveness of elections in this once-deep red state. President Joe Biden won Arizona by fewer than 11,000 votes in 2020.

The new law, which takes effect in December, says an election official who fails to reject a registration application without proof of citizenship or knowingly attempts to register a noncitizen could face felony charges.

A voting rights group immediately filed a legal challenge to the law.

While the legal battles play out, the proof-of-citizenship requirement "puts county recorders in a very difficult position," Patty Hansen, the top election official in Coconino County in northern Arizona, told Fredreka recently. "Do we follow state laws or federal laws? It's very disturbing and kind of scary."

In Pima County -- Arizona's second most populous county, which includes the Democratic stronghold of Tucson -- Recorder Gabriella Cázares-Kelly said she's angry about the measure and what she calls broader efforts by state lawmakers to "criminalize as many people as possible."

But she'll have to comply once the law takes effect.

"I don't plan on going to jail anytime soon," said Cázares-Kelly, a Democrat elected in 2020. "We'll have to wait until someone sues us for infringing on their rights."

In Florida, at least one election supervisor found a workaround to abide by the state's new law establishing a stiff fine for unattended drop boxes.

Alan Hayes, the elections supervisor in Lake County, just outside Orlando, said he's removed the drop box outside of his office and replaced it with a US Postal Service mailbox instead.

"I'm not going pay a staff person to stand out there in the sun or stand out there at two o'clock in the morning when a camera previously monitored that drop box just fine," Hayes told Kelly. "So what did I do? I called the local postmaster."

Republican members of Congress face off

Today is primary day again, with voting ending in Nebraska and West Virginia.

One of the big races to watch: the first member-vs.-member primary of the midterms, which will see West Virginia GOP Reps. Alex Mooney and David McKinley running against each other after the state lost a seat in reapportionment.

Former President Donald Trump's influence on the Republican Party will be tested again as he has endorsed Mooney. McKinley has support from Republican Gov. Jim Justice and Democratic Sen. Joe Manchin.

Meanwhile, in Nebraska, the focus is on the three-way GOP race for governor among businessman/famer/rancher Charles Herbster, farmer and Nebraska Board of Regents member Jim Pillen and state Sen. Brett Lindstrom. Trump has endorsed Herbster, who faces several sexual misconduct allegations, in the race. Herbster has denied the allegations.