Comey knocks Barr's attacks on the Russia probe: 'I have no idea what on Earth he is talking about' 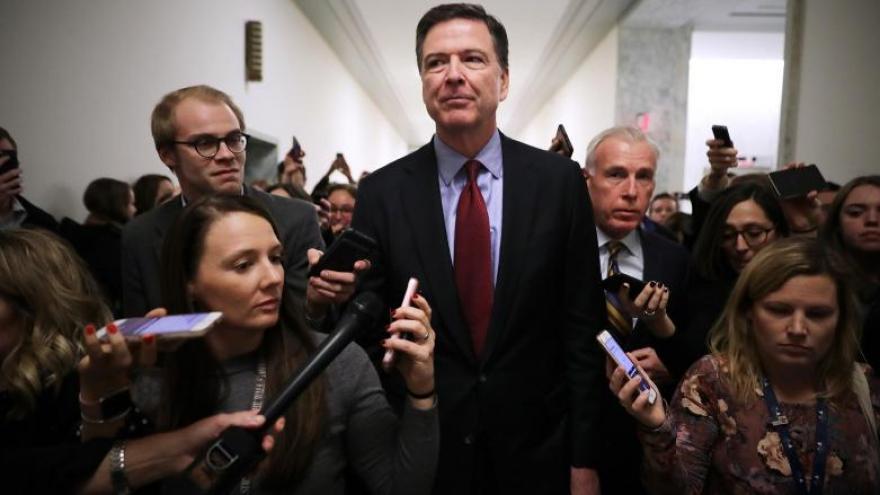 Former Federal Bureau of Investigation Director James Comey is surrounded by reporters after testifying to the House Judiciary and Oversight and Government Reform committees at the Rayburn House Office Building on Capitol Hill December 07, 2018 in Washington, DC.

"I have no idea what on Earth he is talking about," Comey said when asked to respond Barr's comments that the FBI's Russia investigation was "abhorrent."

"This was an investigation, it was appropriately predicated and opened that had to be opened and it was in the main conducted in the right way, picked up by the special counsel, lead to the indictment of dozens of people, and a finding by your colleagues in the Senate that the head of Trump's campaign was a grave counterintelligence threat to the United States of America because he was funneling in information to a known Russian intelligence officer," Comey added. "The notion that the attorney general believes that was an illegitimate endeavor to investigate that mystifies me."

Barr has been a public critic of the investigation that began in July 2016 while Comey was FBI director, and he's tapped US Attorney John Durham to conduct an investigation into the FBI's probe. The Justice Department under Barr sought to dismiss the Flynn charges secured by former special counsel Robert Mueller, but the judge in the case is still weighing whether to grant the request.

Comey cited a judge's criticism of the Justice Department's handling of the Flynn case, saying "this guy is getting treated in a way that nobody's ever been treated before."

At Wednesday's Senate Judiciary Committee hearing, Comey squared off with Senate Republicans at a Senate Judiciary Committee hearing, who pressed him to explain why he didn't know about the problems with a foreign surveillance warrant the FBI obtained in the probe. At the hearing just under five weeks before Election Day, Comey was peppered with questions on everything from the decision to open the Russia investigation in July 2016 to the FBI's knowledge of problems with the opposition search dossier on President Donald Trump and Russia that was used in the Foreign Intelligence Surveillance Act warrants.

"How could the director of the FBI not know all of this?" Senate Judiciary Chairman Lindsey Graham asked Comey. "What astounds me the most is that the director of the FBI in charge of this investigation, involving a sitting president, is completely clueless about any of the information obtained by his agency to throw suspicion over the document."

Comey acknowledged the problems with the FISA warrants obtained on former Trump campaign adviser Carter Page but argued that it was a "small slice" of a much larger investigation into Russian election interference.

"I would say, in the main, it was done by the book. It was appropriate, and it was essential that it be done," Comey said. "There are parts of it that are concerning ... but overall I'm proud of the work."

Newly released declassified documents from the Trump administration in recent days -- which have attacked the FBI's Russia investigation, the prosecution of Flynn and Hillary Clinton's campaign -- provided additional fodder for Republicans to question the former FBI director. Graham pointed to the documents declassified Tuesday by Director of National Intelligence John Ratcliffe -- which summarized unverified Russian intelligence that Clinton's 2016 presidential campaign was trying to "stir up a scandal" by tying Trump to Russia -- arguing they showed the FBI's double standard in not investigating Clinton and Russia.

One Republicans senator even asked Comey about the Democratic allegations he had swung the 2016 election to Trump by releasing information about the FBI's investigation into Clinton's emails.

"You have been an equal opportunity egoist. You have tried to screw both Trump and Clinton," said Sen John Kennedy, a Louisiana Republican.

Comey has been out of the government for more than three years now, following Trump's May 2017 firing. But the FBI's actions that occurred during Comey's tenure are still being fought over in the courts, Congress and the President's Twitter feed.

The FBI's investigation and Mueller's prosecution of Flynn is still being fought in court, after the Justice Department sought to dismiss the charges earlier this year. Along with two Senate Republican probes, Durham is investigating the FBI's Russia investigation at Barr's direction, though Durham's work is not expected to conclude before the election.

Comey himself is the focus of a new Showtime series, "The Comey Rule," which is based on his memoir last year and offers a sympathetic portrayal of the former FBI director and the bureau.

Democrats asked Comey to weigh in on Trump's siding with Russian President Vladimir Putin over the intelligence agencies, which he said was concerning, as well as The New York Times' report that Trump has more than $400 million in personal debt.

Sen. Cory Booker, a New Jersey Democrat, asked Comey about the consequences of Trump's refusal at Tuesday's debate to condemn the Proud Boys, a far right group, when the President said they should "stand back and stand by."

"The FBI is fighting a fire of racist violence and with words like that, the President is using a fire hose to spray gasoline on that fire," Comey said, adding he hoped that "for the sake of our whole country, he'll say ... today what he really meant and condemn these groups."

Democrats also asked for Comey's opinions on the implications of The New York Times report that Trump personally owes more than $400 million.

"So as a general matter, are there serious risks when someone with hundreds of millions of dollars in debt, personal debt, has access as the President does to all of the country's classified and sensitive information?" asked Democratic Sen. Dick Durbin of Illinois.

"It's a serious concern when anyone seeking or with a clearance has that kind of financial vulnerability," Comey responded. "I don't know the circumstances, particulars of the President's case, but in general, yes."

Graham later turned the question to the Democratic nominee, asking Comey if it would be concerning if a candidate's family member received payments from foreign sources -- an implicit reference to former Vice President Joe Biden's son Hunter Biden.

Comey found a more hostile audience inside the Senate hearing room on Wednesday.

Graham, who's up for reelection and running as a close ally of the President, is scrutinizing the origins of the Russia investigation that became Mueller's probe, along with a scathing Justice Department inspector general report that found the FBI's FISA warrants for Page were riddled with errors and relied on an unverified opposition research dossier authored by Christopher Steele.

The inspector general also criticized Comey last year for violating agency policies when he kept and then leaked the memos of his conversations with Trump.

Comey has acknowledged the problems with the FISA warrants outlined by the inspector general, saying last year there was "real sloppiness" that was concerning. Comey testified in 2018 before the House Republican-led Oversight and Judiciary Committees that were also probing the FBI's handling of the Russia investigation.

Graham and other Republican critics have argued that the problems with the dossier and the Page FISA warrants undercut the legitimacy FBI's Russia investigation, though it began before the dossier was given to the FBI.

The investigations being conducted by Graham and Senate Homeland Security Chairman Ron Johnson of Wisconsin, who is running a separate probe, have been boosted by freshly declassified documents this year coming from Barr and Director of National Intelligence John Ratcliffe.

The declassified releases from Ratcliffe and Barr have been touted by Trump and his campaign, in the absence of a report from Durham, who is not expected to conclude his work before the election, according to sources and Barr's own recent public comments.

On Tuesday, Ratcliffe released unverified Russian intelligence suggesting Clinton approved a campaign plan to "stir up a scandal" by tying Trump to Russia and the Democratic National Committee hack, which Democrats charged was Russian disinformation (Ratcliffe denied this).

Last week, the Justice Department declassified documents related to an FBI investigation into Steele's primary subsource for the dossier over connections to Russian intelligence officials. And Justice Department prosecutors in the past month conducted and released notes from an interview with a former FBI case agent critical of the Russia investigation and the prosecution of Flynn.

Asked last week if he was still planning to issue a report on the Russia probe before the election, Graham was unsure. "It might be pushed back a little bit. I hadn't thought about that," Graham said with a laugh, in a nod to the Supreme Court hearings and expected committee vote later this month.