January 6 committee asks Ivanka Trump to talk with them 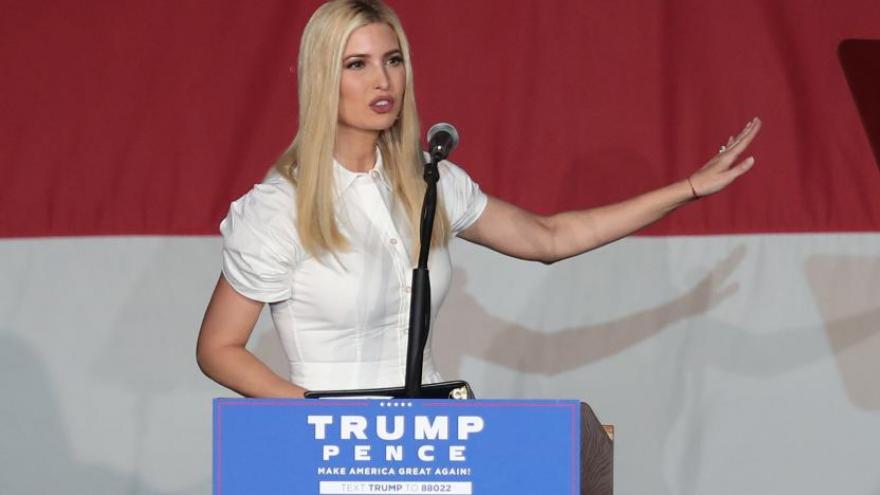 (CNN) -- The House select committee investigating the January 6 riot is asking former President Donald Trump's daughter and then-senior White House adviser Ivanka Trump to voluntary cooperate with its investigation, a major step for the panel closing in on the former President's inner circle.

The committee publicly released a letter dated Thursday addressed to Ivanka Trump seeking "voluntary cooperation with our investigation." In the letter, the committee revealed explosive new details about the former President's actions in the days leading up to and on January 6.

The letter included new testimony about Trump's efforts to pressure former Vice President Mike Pence to bend to his will on the morning of January 6, as well as new text messages from Fox host Sean Hannity -- in the aftermath of the attack, texts that urged the White House to get Trump to stop talking about the election being stolen and to distance the former President from certain "crazy people."

A spokesperson for the former President's daughter told CNN Thursday afternoon that "Ivanka Trump just learned that the January 6 Committee issued a public letter asking her to appear."

"As the Committee already knows, Ivanka did not speak at the January 6 rally," the spokesperson said. "As she publicly stated that day at 3:15pm, 'any security breach or disrespect to our law enforcement is unacceptable. The violence must stop immediately. Please be peaceful.' "

Pressed whether the statement means Ivanka Trump will not comply with the invitation, the spokesperson did not respond.

The invitation to Ivanka is the first time the committee has sought testimony from a member of the President's family, in the latest sign that the panel is closely scrutinizing the actions of the President and those around him before, during and after January 6. The outreach to Ivanka Trump comes after CNN reported earlier this week that the committee had subpoenaed and obtained call records from Eric Trump and Kimberly Guilfoyle, who is engaged to Donald Trump Jr.

The committee's decision to publicly seek Ivanka Trump's testimony comes a day after the Supreme Court cleared for the release of presidential records from the Trump White House through the National Archives.

'You're not tough enough'

The letter the committee sent to Ivanka provided additional detail showing what the committee has already uncovered -- and what it hopes to learn from Ivanka Trump.

The panel wrote that Keith Kellogg -- Pence's national security adviser who was with Trump in the White House when the riot was happening -- testified about how the former President attempted to coerce Pence during a phone call the morning of January 6. Ivanka Trump was present for Trump's end of the call.

In testimony to the committee, Kellogg reiterated that the former President told Pence, "You're not tough enough to make the call."

Kellogg also corroborated an account of the phone call where Trump claimed that if Pence did not do what he was asking, he had selected the wrong running mate.

"Mike, it's not right. You can do this. I'm counting on you to do it. If you don't do it, I picked the wrong man four years ago. You're going to wimp out,"read the transcript of the interview that Kellogg confirmed.

Kellogg also revealed in his testimony to the committee that after the phone call ended, Ivanka Trump turned to him and said, "Mike Pence is a good man," to which Kellogg affirmed, "Yes, he is."

The panel is asking Ivanka Trump for her account of this conversation and any other ones she may have witnessed, in which, her father discussed plans to obstruct or impede the election certification process.

The committee also wants to learn more from Ivanka about her father's "state of mind" as the attack unfolded.

Based on testimony from Kellogg and others, the panel pinpoints Ivanka as central to the effort to try and get her father to intervene and stop the unrest because other officials close to the former President, like Mark Meadows or then-White House press secretary Kayleigh McEnany, did not have the same affect. McEnany spoke to the committee earlier this month.

"Testimony obtained by the Select Committee indicates that members of the White House staff requested your assistance on multiple occasions to intervene in an attempt to persuade President Trump to address the ongoing lawlessness and violence on Capitol Hill," the letter to Ivanka Trump reads.

The committee is specifically interested in speaking with Ivanka about what she witnessed or did in the hour or so between when the march to the Capitol started and when the former President tweeted that Pence denied his request and certified the 2020 election results, which rioters have attested in court had a direct correlation to when violence at the Capitol increased.

One witness described Trump's mood as "stubborn" during this period but that Ivanka could get her father to "take a course of action."

The panel wrote that it was told Ivanka Trump went to speak with her father a second time because her first attempt was not sufficient to get him to act as the January 6 attack was unfolding.

"I think she went back there because Ivanka can be pretty tenacious," the individual who testified to the committee said.

A new text exchange further underscored the full-court press from staffers within the White House to try and get Trump to act.

An individual from outside the White House texted, "Is someone getting to potus? He has to tell protestors to dissipate. Someone is going to get killed."

"I've been trying for the last 30 minutes," the White House aide replied. "Literally stormed in outer oval to get him to put out the first one. It's completely insane."

The panel has been zeroing in on why the decision was made for Trump to release a pre-recorded video instead of giving a live address. And it has been specifically trying to obtain the unreleased videos that he recorded prior to the final version released on January 6.

For the first time, the committee disclosed that it had information to suggest in the draft videos, Trump did not explicitly ask rioters to leave the Capitol.

Kellogg testified that he "very strongly recommended [they] do not" ask Trump to speak in front of members of the media "because press conferences tend to get out of control, and you want to control the message."

The committee also is asking Ivanka to clarify a discrepancy about whether her father actually intended to go to the Capitol on January 6.

Although Meadows said in his book that Trump was never intending to walk to the Capitol after his speech on the Ellipse, the committee wrote it has testimony and "contemporaneous notes" of a former senior White House official who said that the former President "genuinely did wish to walk or drive with protestors to Capitol Hill at the close of his speech."

In addition, the panel said it was seeking to learn from Ivanka whether her father gave any order to deploy the National Guard to respond to the violence at the Capitol.

"The Committee is aware that certain White House staff devoted time during the violent riot to rebutting questions regarding whether the President was attempting to hold up deployment of the guard, and that Press Secretary McEnany issued a tweet that afternoon suggesting that the guard would be deployed (this occurred hours later)," the committee wrote.

The committee said it had no evidence that Trump issued any order to deploy the National Guard that day or made any calls to the Department of Justice or any other law enforcement agency requesting the deployment of their personnel to the Capitol.

"As is evident from the events described above, you have knowledge bearing directly on the President's actions or inaction on January 6th, and his state of mind as the violent attack occurred at the Capitol," the panel wrote to the former President's daughter.

The committee said it also wants to ask Ivanka about documents its obtained that suggest the former President's White House counsel "may have concluded that the actions President Trump directed Vice President Pence to take would violate the Constitution or would be otherwise illegal."

The panel also revealed a new text exchange between a lawmaker from the House Freedom Caucus and Meadows, where the lawmaker warned him about the former President's plans. The committee asked Ivanka if she had similar conversations with Meadows, Pence or his staff.

"If POTUS [meaning President Trump] allows this to occur ... we're driving a stake in the heart of the federal republic," the text message reads. The lawmaker sending the text is not identified.

The committee is seeking information on what happened after January 6, including an effort to convince Trump from framing the election as being stolen after the attack and to keep him away from certain individuals.

"The Select Committee would like to discuss this effort after January 6th to persuade President Trump not to associate himself with certain people, and to avoid further discussion regarding election fraud allegations," the letter reads.

The letter revealed a new text exchange from Hannity, whom the panel has also asked to voluntarily cooperate, to Meadows and McEnany on January 7, which lays out a five point plan for how to approach conversations with the former President. The committee only reveals the first two points of that plan.

"1-No more stolen election talk," and, "2-yes, impeachment and 25 th amendment are real, and many people will quit," the first two points read.

McEnany replied, "Love that. Thank you. That is the playbook. I will help reinforce."

The committee also has text messages where Hannity and McEnany agree that the former President should be kept away from certain individuals who could have a negative impact on his thinking.

The committee announced its plans to seek Ivanka Trump's cooperation in a statement following remarks from its chairman, Democratic Rep. Bennie Thompson of Mississippi, who cited the former President's daughter in comments to reporters.

"You will anticipate the committee inviting some people to come talk to us," Thompson said on Capitol Hill on Thursday. "Not lawmakers right now. Ivanka Trump."

Wyoming Rep. Liz Cheney, the vice chair of the committee and one of its two Republican members, told ABC News last month that the panel has "firsthand testimony" that during the attack, Trump asked her father to intervene.

"We know his daughter -- we have firsthand testimony that his daughter Ivanka went in at least twice to ask him to 'please stop this violence,'" Cheney said.

CNN previously reported on some of these interactions, described in the books "I Alone Can Fix It," by Washington Post reporters Carol Leonnig and Philip Rucker, and "Peril," by Post journalists Bob Woodward and Robert Costa. Ivanka Trump repeatedly tried to intervene, talking to her father three times. "Let this thing go," she told him. "Let it go," she said, according to "Peril."