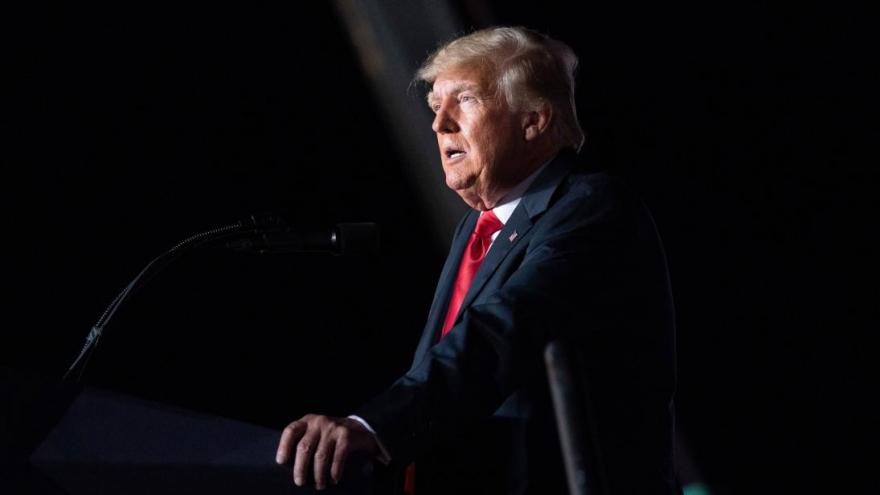 The House select committee investigating the January 6 Capitol Hill insurrection has information from multiple sources with firsthand knowledge that describe what then-President Donald Trump, pictured here, on September 25, 2021 in Perry, Georgia was doing during the riot, according to a person familiar with the investigation.

(CNN) -- The House select committee investigating the January 6 Capitol Hill insurrection has information from multiple sources with firsthand knowledge that describe what then-President Donald Trump was doing during the riot, according to a person familiar with the investigation.

"There's a collection of people with relevant information," the source said.

One key witness who has given a deposition is Keith Kellogg, then-Vice President Mike Pence's national security adviser, who was with Trump in the White House when the riot was happening. Kellogg, who was seen by reporters entering his December interview, told CNN on Sunday that he testified under oath to the committee but declined to comment about the substance of his deposition.

The committee also has texts and other documents that shed light on what Trump was doing, according to the source. Some of those messages came from Mark Meadows, Trump's former chief of staff, who provided them to the panel. The House voted last month to refer Meadows to the Justice Department for criminal contempt of Congress after he failed to appear for a deposition.

Committee Chairman Bennie Thompson and Vice Chairwoman Liz Cheney revealed the existence of some of those details on Sunday, making the case that the information underscores how Trump did nothing to stop the violence, which they see as a dereliction of duty.

"We have significant testimony that leads us to believe that the White House had been told to do something," Thompson, a Mississippi Democrat, told CNN's Dana Bash on "State of the Union."

"We want to verify all of it so that when we produce our report and when we have the hearings, the public will have an opportunity to see for themselves," he said. "The only thing I can say, it's highly unusual for anyone in charge of anything to watch what's going on and do nothing."

Cheney, a Wyoming Republican, said the panel has "firsthand testimony" that during the attack Trump's daughter and then-senior adviser Ivanka Trump asked him to intervene.

"We know his daughter -- we have firsthand testimony that his daughter Ivanka went in at least twice to ask him to 'please stop this violence,'" Cheney told ABC News' "This Week."

CNN previously reported on some of these interactions, described in the books "I Alone Can Fix It," by Washington Post reporters Carol Leonnig and Philip Rucker, and "Peril," by Post journalists Bob Woodward and Robert Costa. Ivanka Trump repeatedly tried to intervene, talking to her father three times. "Let this thing go," she told him. "Let it go," she said, according to "Peril."

"Any man who would not do so, any man who would provoke a violent assault on the Capitol to stop the counting of electoral votes, any man who would watch television as police officers were being beaten, as his supporters were invading the Capitol of the United States, is clearly unfit for future office, clearly can never be anywhere near the Oval Office ever again," Cheney added on ABC.

The House select committee also previously revealed text messages from the former President's son, Donald Trump Jr., to Meadows stating that his father needed to "condemn" the insurrection as it unfolded.

"'He's got to condemn this sh*t ASAP. The Capitol Police tweet is not enough,'" Trump Jr. wrote in one message to Meadows that Cheney read aloud last month as the committee was meeting to advance the criminal contempt report against Meadows for a full House floor vote.

When Meadows had texted back that he agreed, Trump Jr. said, according to Cheney: "We need an Oval office address. He has to lead now. It has gone too far and gotten out of hand."

Only after pleading from aides and congressional allies inside the besieged Capitol on January 6 did the then-President release a taped video urging the mass of his supporters to "go home," while still fanning their misplaced grievances about a stolen election.

"He could have simply walked a few feet to the White House briefing room. He could have gone immediately on live television and asked his supporters to stop what was happening, asked them to go home. He failed to do that," Cheney told CBS News' "Face the Nation" on Sunday. "At the same time the violent assault was happening, he is watching television, and he is also calling one senator urging delay of the electoral vote."

CNN has previously reported that Trump spoke with Alabama Republican Sen. Tommy Tuberville as the deadly riot was unfolding, trying to convince him to make additional objections to the Electoral College vote in a futile effort to block Congress' certification of President Joe Biden's win, according to a source familiar with the call.

The select committee has interviewed scores of Trump allies and former officials as it works toward releasing an interim report with initial findings by the summer, a committee aide previously told CNN.

Committee members have said that they hope to present more of their work in a public setting later this year, which would include public hearings that outline the story of what occurred on January 6. The specific timing of these hearings has not yet been set.