January 6 committee subpoenas Giuliani and 3 others 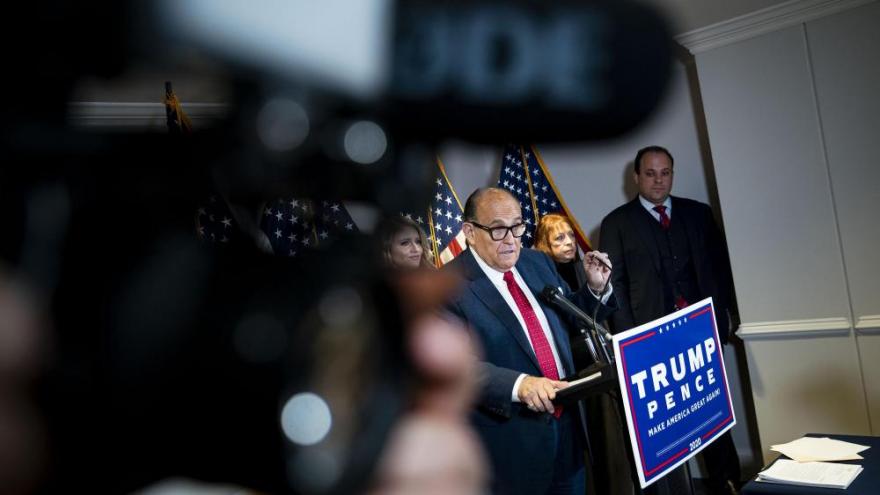 (CNN) -- The House select committee investigating the January 6 riot issued a subpoena Tuesday for Rudy Giuliani, a central figure in former President Donald Trump's failed bid to overturn the 2020 election on the basis of unfounded allegations of widespread voter fraud.

In addition to Giuliani, the committee issued subpoenas to two other attorneys who pushed various election fraud conspiracies on Trump's behalf: Jenna Ellis and Sidney Powell.

Former Trump campaign adviser Boris Epshteyn, who was among those working with Giuliani at the post-election Willard Hotel "command center," was also subpoenaed Tuesday.

"The four individuals we've subpoenaed today advanced unsupported theories about election fraud, pushed efforts to overturn the election results, or were in direct contact with the former President about attempts to stop the counting of electoral votes," Democratic Rep. Bennie Thompson of Mississippi, who chairs the committee, said in a statement Tuesday.

The subpoenas mark a significant escalation in the sweeping probe as the committee is now seeking to compel cooperation from those at the heart of Trump's push to overturn the election predicated on the lie that it was stolen. The panel has an entire investigative team dedicated to examining efforts by Trump and his allies to pressure Department of Justice officials, as well as those at the state level, to overturn the results of the election.

Giuliani's attorney, Robert Costello, tells CNN that the House select committee subpoenaing his client amounts to "political theater" and indicated that his client doesn't plan to provide information because he has claims of executive privilege and attorney-client privilege.

Costello also said Giuliani has not yet received the subpoena and that the committee had not sought his voluntary cooperation before issuing one. Costello said the fact that the media got the subpoena letter before his client "shows you this is political theater, not really an investigation of facts."

"Chairman Bennie Thompson, who is not a lawyer, should realize that Giuliani has a claim of executive privilege and a claim of attorney-client privilege," Costello said. Costello added that it's "hard to believe" that the committee "is going to end up with any substantive information from Mr. Giuliani."

"When you are asking questions of the president's personal attorney, you are not going to get answers. They want to try to make an example of him," Costello said.

Powell said in a statement through her attorney Wednesday that she will appear before the House Select Committee and answer questions.

But her attorney, Howard Kleinhendler, reiterated that Powell, also an attorney, still believes there was election fraud.

Epshteyn said in a statement Tuesday he was not surprised by the committee's subpoena but called the panel "illegitimate."

Also Tuesday, CNN exclusively reported that the committee has subpoenaed and obtained records of phone numbers associated with one of Trump's children, Eric Trump, as well as Kimberly Guilfoyle, who is engaged to Donald Trump Jr.

Giuliani and Powell both have been subject to sanctions and lawsuits over their efforts for Trump to claim election fraud in court by filing lawsuits in key states after the 2020 vote. Legal authorities have said that effort was an intentional disinformation campaign, meant to prime Trump supporters to lose faith in the electoral results.

After the election, Giuliani was in high-level meetings with Trump advisers.

In its letters to Giuliani and Powell, the committee references witness testimony and public reporting to state that they "urged President Trump to direct the seizure of voting machines around the country after being told that the Department of Homeland Security had no lawful authority to do so."

CNN has previously reported that in December 2020, Giuliani asked former DHS official Ken Cuccinelli whether the department could seize voting machines in certain states to be reexamined for evidence of widespread voter fraud.

Cuccinelli, who CNN previously reported has spoken to the committee, said in October that he told Giuliani the department had no legal authority to seize voting machines or interfere with state-run elections. Cuccinelli also said that "no one at any level pushed us to do anything outside of our existing mission sets."

Trump in December briefly toyed with the idea that Powell could become a special counsel to him, making it possible for his administration to seize voting machines. Powell appears to have stepped away from being in Trump's closest circle in the immediate days leading up to January 6.

Both have previously attempted to claim information about their work related to Trump should stay confidential, raising the possibility of a fight over privileges with the House.

The panel also asks Powell in its letter to provide the evidence she used to promote claims of election fraud both in court and in public forums.

Investigators have been asking witnesses about Giuliani and Powell during previous closed-door interviews but now want to hear directly from the former Trump attorneys.

According to a source familiar with his testimony, former New York Police Commissioner Bernie Kerik was asked last week about Giuliani and he had defended the former New York mayor as legitimately believing there was at least "probable cause" of voter fraud that should be investigated and not a "big lie."

Kerik worked alongside Giuliani in the weeks after the 2020 presidential election to find any evidence of voter fraud that would swing it for Trump. There is no evidence of widespread voter fraud in the election.

Lawmakers were also asking about Powell and how she was separated from the Trump legal team.

The panel references the public reporting on Ellis revealing that she wrote memos outlining how she believed then-Vice President Mike Pence could reject electoral college votes and overturn the 2020 election, including one theory that he could ignore a federal law.

To Epshteyn, the committee cites public reports that show the former Trump campaign adviser was on a call with Trump on the morning of January 6 where "options were discussed to delay the certification of election results in light of Pence's unwillingness to deny or delay certification."

Epshteyn was also at the Willard Hotel in Washington where Trump advisers discussed options for overturning the election results.

In his statement announcing the subpoenas, Thompson calls on these four witnesses to cooperate with the panel's investigation.

"We expect these individuals to join the nearly 400 witnesses who have spoken with the Select Committee as the committee works to get answers for the American people about the violent attack on our democracy," Thompson said.

While hundreds of witnesses are cooperating with the panel, it continues to face stonewalling tactics from an inner circle of key Trump allies.