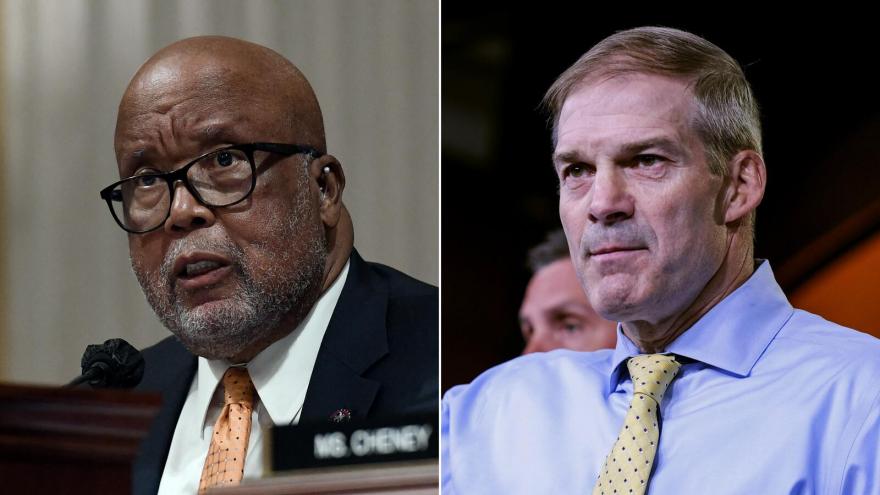 Members of the House select committee investigating the January 6 Capitol Hill insurrection are weighing what options they have to compel their fellow members of Congress to cooperate with their probe.

(CNN) -- Members of the House select committee investigating the January 6 Capitol Hill insurrection are weighing what options they have to compel their fellow members of Congress to cooperate with their probe.

At issue is determining a path that would give them the best opportunity to obtain the information and interviews they are looking for by using the powers of the committee at their disposal.

The committee is wrestling with whether they have the constitutional right to subpoena their fellow members, and even if they do, if they have an enforcement mechanism in place that will ultimately lead to cooperation.

"Well we are exploring it," said Rep. Bennie Thompson, a Democrat from Mississippi who serves as the chair of the committee. "And based off a meeting we will have later this week we will have an answer."

Thompson said the committee is waiting for guidance from their counsel to determine their course of action.

So far the committee has already attempted to glean that information by sending letters asking for the voluntary cooperation of Reps. Scott Perry of Pennsylvania and Jim Jordan of Ohio. Both Perry and Jordan responded to the committee with a statement and a letter that made it apparent that their cooperation would not come without a fight.

Perry issued a statement where he called the committee illegitimate and said he wouldn't provide them the information they were looking for.

"I decline this entity's request and will continue to fight the failures of the radical Left," Perry wrote.

Jordan wrote the committee a lengthy letter, where he never specifically said he wouldn't cooperate, but said that he had nothing "relevant" to offer the committee's investigation.

Despite the recalcitrance of the GOP duo, the committee continues be reluctant to take the step of forcing their cooperation. Issuing subpoenas of sitting members of Congress by a congressional committee would be unprecedented and would likely lead to a number of legal challenges.

"This is uncharted waters," Thomas Spulak, who served as general counsel to the House of Representatives in the 1990s, told CNN.

The solution to dealing with those legal challenges is a discussion the committee has yet to fully reconcile.

"It's a question we'll talk about if we get to that step," said Democratic Rep. Pete Aguilar of California, a member of the committee.

His fellow member, Democratic Rep. Jamie Raskin of Maryland, added: "We have not had any conversation about that." But Raskin went on to say that he believes that there is nothing preventing the committee from taking that step if they decide to. "Absolutely, my position is that we clearly have the authority to do it."

Raskin, who was a professor of constitutional law at American University's Washington College of Law for more than 25 years, laid out the legal reasons for why he believes subpoenaing members of Congress is within the committee's jurisdiction.

"Article One of the Constitution gives each house the power to define its own rules of proceeding. Each house has the power of disciplinary sanction over all of its members, from censure to admonishment to expulsion," Raskin explained. "And the Congress, according to the Supreme Court has the power to subpoena anyone in order to pursue a legitimate investigative purpose, which this obviously is."

One potential hurdle that the committee must consider is a lawmaker citing the Speech and Debate Clause, which states that a sitting member of Congress is protected from certain inquiries and procedures that originate outside of Congress. But members on the panel and legal scholars alike do not see that as an issue.

"The Speech and Debate Clause says that members of Congress shall not be questioned about their legislative activities outside of Congress, but providing the clear implication that it's fine to do so within Congress," Raskin said.

Legal scholar and Harvard professor Laurence Tribe told CNN, "The Speech and Debate Clause and the Arrest Clause protect members from certain inquiries and procedures originating outside Congress, but only political considerations restrict use of the subpoena power by Congress itself to compel sitting members to testify or produce documents needed by a committee like the Special House Committee."

Spulak said, "The Supreme Court has looked at this over the years and found that constitutional privilege doesn't apply to everything only those things that are within the legislative sphere."

But the authority to issue the subpoenas is only part of the problem for the committee.

"There is nothing that would stop them from doing it," Spulak said, confirming that the panel has the legal ability to issue a subpoena to a sitting member of Congress. "The question is what happens if the member doesn't comply?"

While the committee has conducted interviews with close to 400 people, they have run into roadblocks in getting cooperation with key members of the Trump inner circle many of which have been served subpoenas. The committee has already referred two Trump allies, Steve Bannon and former White House chief of staff Mark Meadows, for criminal contempt of Congress.

They may not have that option when it comes to members of Congress.

"Will the committee have the political will to vote a member in contempt? Will the leadership bring a contempt resolution to the floor and have the full house vote on it in order to send it to the Department of Justice? There's a lot of questions there in ultimately, you know, how it plays out," Spulak told CNN.

Spulak laid out that the panel could go to the house Ethics Committee if a member did not cooperate with a subpoena, but even enforcing it that way is an unprecedented step that could lack the ramifications needed to force compliance.

"We are not aware of instances where the Ethics Committee has had to subpoena a member to come and appear in an investigation involving him or herself. It's usually done voluntarily," Spulak explained.

Meanwhile, as the committee deliberates, Republicans are using the committee's work as a fundraising and political organizing tool. As an example, Jordan has been touting his efforts to fight the committee's "expansive subpoenas" during private call with donors and conservative grassroots organizers last month.

The political consequences of a provocative move like serving a sitting member of congress a subpoena is not lost on the members of the January 6 committee.

If the committee opts against issuing a subpoena for fellow members, another option could be to call on them to appear for a public hearing and effectively force Republican members to decide whether or not they will show up.

But that too carries potential political risks. While the committee is unique in that it is made-up of nine lawmakers who are unified around a common mission, giving members such as Jordan an opportunity to appear as witnesses could give them an opportunity to derail what the panel is hoping will be carefully orchestrated prime time hearings intended to help tell the complete story of what happened on January 6.