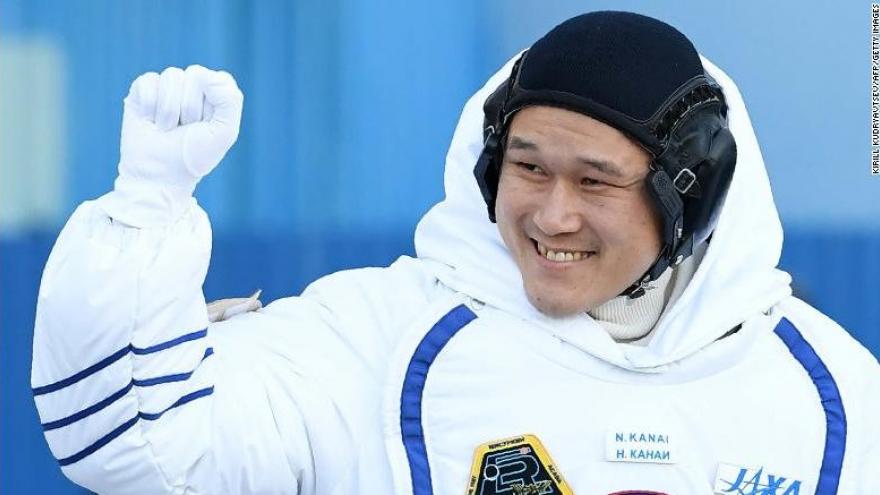 (CNN) -- What seemed like an out-of-this-world claim has turned out to be just that.

Japanese astronaut Norishige Kanai apologized on Wednesday for suggesting he had "grown" 3.5 inches (9 centimeters) while at the International Space Station (ISS).

Kanai, 41, had only been on the ISS for a few weeks as part of a six-month mission when he tweeted he had some "important news" to share.

"I got my body measured after arriving in the space. Surprise, surprise, I was grown by 9 centimeter! only in 3 weeks. it's first time since my junior high/high school days. I am bit worried if I can fit into my seat in Soyuz on the way back to the earth," Kanai wrote in his first tweet on Tuesday.

He then said he was worried the unusual growth spurt could leave him stuck in orbit because he'd now be unable to fit in to the seat on the Soyuz rocket used to return astronauts back to our big blue planet.

Without earth's gravitational forces, fluid between the discs of the spine fluctuates resulting in a lengthening of the spine, making astronauts temporarily taller.

According to a 2016 study, a six-month stay at the ISS can result in a brief height increase of 2 inches (5 centimeters), which can be accompanied by a weakening of the muscles supporting the spine.

But Kanai's fears were put to rest when the Russian captain, dubious of such an unusual discrepancy, suggested he double-check his measurements. Kanai found he had in fact only grown by 0.78 inches (2 centimeters).

"I am very sorry to spread such fake news," he wrote in a follow-up post on Twitter a day later. "I feel no pain on my back or hip, rather stiffness on my shoulder disappeared, so I guess 9 cm growth was too much."

While Kanai reports he is not in any pain so far, others have not been as lucky. Astronauts have often spoken of the health implications of prolonged space travel.

"It's sort of an ongoing problem that has been a significant one with cause for concern," Douglas Chang, chief of physical medicine and rehabilitation service at University of California San Diego Health, told CNN in 2016.

Because of the numerous complaints, NASA has been developing studies into the impact of space travel on the human body for several years.

Mark and Scott Kelly volunteered to take part in a NASA study to see how twins measure up in different environments. Scott was sent to space while Mark remained on Earth.

The study found that Scott grew 2 inches in nearly a year on the ISS, but has since shrunk to his normal height after returning to Earth.

NASA Human Research Program chief scientist John Charles said the preliminary results of the twin study were "reassuring" for future long-duration ISS missions but more data was needed. It is calling on the scientific community to suggest research proposals to explore what journeys in space over a long period of time can do to the human body.