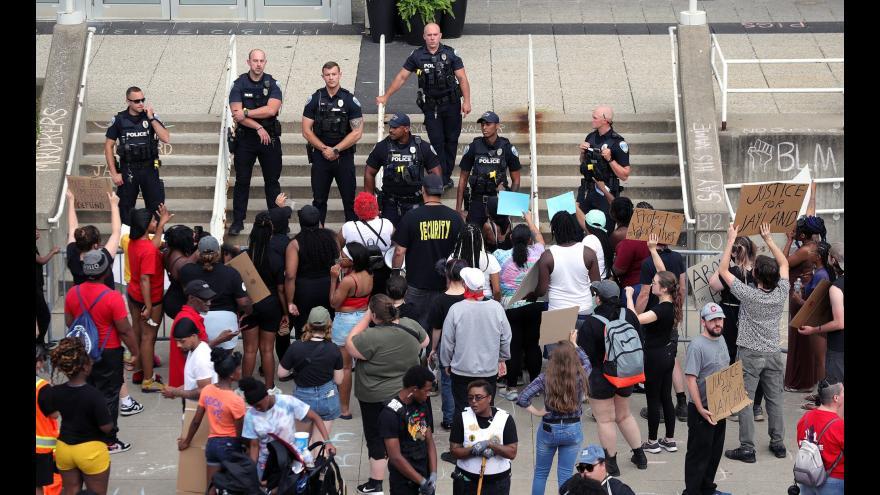 City officials also played police body camera footage of the shooting for the first time Sunday, nearly a week after the fatal shooting. The video raises more questions about the shooting of the unarmed Black man that is being investigated by the Ohio Bureau of Criminal Investigations (BCI).

Police said the shooting occurred after Walker, 25, fled as officers tried to initiate a traffic stop for traffic and equipment violations on Monday, June 27.

After a car chase, Walker got out of his car and a foot chase took place, police said. Officers believed Walker was reaching towards his waist and they "felt that Mr. Walker had turned and was motioning and moving into a firing position," Mylett said.

Walker, however, was not armed, Mylett said Sunday.

During the vehicle pursuit, a gunshot was fired from Walker's car, police said.

In narrated body camera video, police said that about 40 seconds after Walker drove away from police, "a sound consistent with a gunshot can be heard on the body-worn cameras of the officers." Police also said "a flash of light" could be seen on the driver's side of the car at the time of the sound.

"That changes the whole nature of the traffic stop," Mylett said at the news conference Sunday. "It went from being a routine traffic stop, to now a public safety issue. And then the pursuit continued."

The video released by police includes footage from the body-worn cameras of 13 officers who were at the scene.

Toward the end of the pursuit, some of the footage shows the silver car Walker was driving stopping before he begins to exit the driver's side of the vehicle.

At least one officer shouts, "Let me see your hands" and tells him not to move. The video shows Walker getting back into the car, which slowly moves forward. He is then seen getting out of the passenger side door and running from officers.

The police narration of the video says officers "attempted to safely take the suspect into custody by deploying their Tasers," and shows a still frame of an officer deploying a Taser. The Tasers were unsuccessful and Walker continued to run, the narration says.

At least one officer yells for Walker to show his hands, one video shows. The foot chase continued for several seconds, and at one point Walker "stopped and quickly turned towards the pursuing officers," the police narration says. "Officers reacted by discharging their firearms, striking the suspect."

Dozens of gunshots are heard over seven seconds as officers fire at Walker, a number of the videos show.

The shooting ends after at least one officer shouts "cease fire" three times.

Police said the images of Walker as he was shot have been blurred at the request of the family, but in some of the footage, he appears to be on the ground as gunfire continues.

A handgun and loaded magazine were found in Walker's car after the shooting, police said, along with a gold ring.

Eight officers were "directly involved in the shooting," Mylett said, and all have been placed on paid administrative leave, according to department policy.

The BCI, which is investigating the fatal shooting, has yet to confirm the number of times Walker was shot, Mylett said, and it's still not known how many rounds were fired.

"However, based on the video, I anticipate that number to be high," he said. "A lot of rounds were fired."

Mylett said officers retrieved a shell casing near the scene of the attempted traffic stop that was "consistent with the firearm that Mr. Walker had in his vehicle. The BCI will determine whether or not that casing came from the gun or not."

He added that a traffic camera captured "what we believe to be a muzzle flash coming out of the car. Again the BCI will be determining whether or not that is the case."

The Journal, which was allowed to review an investigative worksheet at the medical examiner's office, said it "indicated that Walker was observed laying on his back and was in handcuffs when a medical examiner investigator arrived at the shooting scene."

Walker relative Robert Dejournett, who is a pastor at St. Ashworth Temple Church of God In Christ in Akron, told CNN's Polo Sandoval the family wants Walker to be remembered as a fun-loving young man who was full of life.

"We're God-fearing folk who believe in God and we want to exemplify that even in this process," Dejournett said. "We don't want any rioting or anything like that."

Dejournett said the family hopes the shooting will lead to systematic change.

"We want to take that, and we want to use it for the benefit of systemic change," Dejournett said. "We want to be treated like human beings, you know, Black men, young men, they're afraid when it comes to police -- that shouldn't be," he said.

Attorneys for Jayland Walker's family held a news conference shortly after police released the footage and emphasized that while the family wants answers from police, they also want the public to "give peace, give dignity, and give justice a chance -- for Jayland."

"Each time I've watched the video, it's gotten worse for me," attorney Ken Abbarno said. "Every movement that I see, every shot that I heard, and every time that I see Jayland, lying on the ground, just gets more and more horrific."

Abbarno said the video is "a lot more than just 'tough to see.' It's something that should never, ever have to be seen."

Bobby DiCello, another family lawyer, said Walker "had never broken the law a day in his life -- no crimes of any kind." DiCello said Walker's behavior Monday "would be indicative of some distress, some fear, something that he was going through."

The Akron Police union believes the officers involved in the shooting were justified in their actions, "including (with) the number of shots fired," according to a statement released Sunday by the Fraternal Order of Police Akron Lodge No. 7.

"The decision to deploy lethal force as well as the number of shots fired is consistent with use of force protocols and officers' training" the statement said.

Each officer is "cooperating fully" with the independent investigation conducted by the BCI, the statement said.

City of Akron asks the public to remain calm

Ahead of the release of the footage, Akron officials asked the community to be patient and allow the investigation to be carried out while protesting peacefully if they wished to demonstrate.

"I won't mince words -- the video you are about to watch is heartbreaking and is very tough to take in," Mayor Dan Horrigan said in a news conference ahead of the release of the footage.

The mayor acknowledged the rights of Akron residents to protest. "But I hope the community can agree, that violence and destruction are not the answer," he said, asking that demonstrations remain peaceful.

"Please be patient, and let the attorney general do their work," he said.

City leaders underscored that footage was released under a new city ordinance that requires video footage documenting an active police officer's use of force to be released within seven days of the incident.

"We have developed an operations plan to manage and to provide safe space in this city for people to protest," Mylett said. "And in case that it turns to a situation where it's no longer peaceful, we have an operations plan in place for that as well, and I'm not going to discuss any of the details about that."