Jefferson Davis' chair, stolen from an Alabama cemetery, has been recovered and 2 people have been arrested 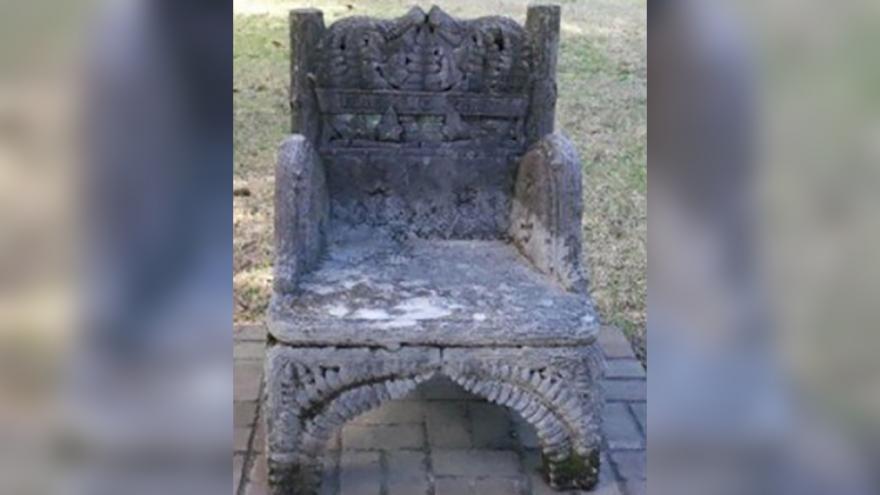 The concrete chair was stolen from an Alabama cemetery, police said. - NOPD

(CNN) -- New Orleans Police have arrested two people in connection with the theft from an Alabama cemetery of a chair previously owned by Jefferson Davis, the president of the Confederacy.

Stanley Warnick and Kathryn Diionno were arrested for the theft of the chair, the New Orleans Police Department said in a press release sent to CNN. They are facing charges for possession of stolen property in New Orleans, the release says. Both are currently out on bail.

The department is searching for an additional person in connection with the theft.

The concrete chair, which the NOPD said is valued at $500,000, was taken in March from Old Live Oak Cemetery in Selma, Alabama. The Dallas County Sheriff's Office in Alabama had asked the NOPD for assistance in recovering the chair.

The NOPD detectives received a tip that the chair was at a location in the city, and it was recovered on Thursday, according to the statement. The chair will be returned to the cemetery in Selma, the NOPD said in the statement.

CNN has reached out to the Dallas County sheriff but has not heard back.

The attorneys for Warnick and Diionno told CNN that their clients are not guilty and not associated with any political activism group.

"They are small business owners and community members. They are, if anything, themselves victims of mistakes of fact that have led to this unfortunate situation," attorneys Michael Kennedy and Miles Swanson told CNN in a statement. "They look forward to clearing their names and disassociating their names from any criminal activity."

Dallas County District Attorney Michael Jackson told CNN last month that he was confident an arrest would be made.

"The chair has been returned to Selma. One more suspect is being sought," Jackson said Saturday. "The suspects will have a theft charge and an extortion charge put on them in Selma. The best story written since Hamlet is coming to a close."