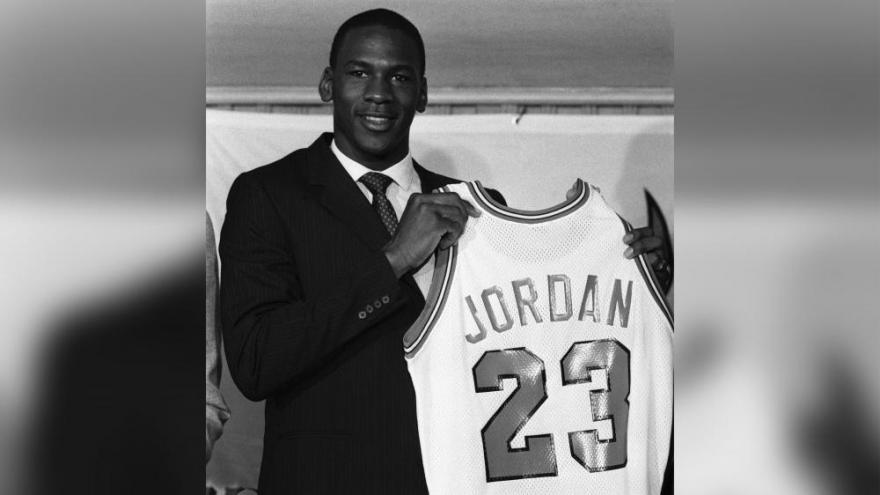 Michael Jordan holds up his Chicago Bulls jersey at the 1984 news conference in which the Bulls announced his signing.

(CNN) -- Sports jerseys from Michael Jordan, Colin Kaepernick, and even a former president all set world records this week during an online auction.

Jordan's historic rookie Chicago Bulls jersey -- the one he held up at the press conference announcing his signing in 1984 -- sold for $320,000, the most that a Jordan jersey has ever sold for, according to Julien's Auctions, an auction house. The previous record as the $288,000 someone bid in July 2020 for the jersey Jordan wore during the 1997-98 Eastern Conference finals.

But Jordan's memorabilia wasn't the only rookie jersey to sell big. Colin Kaepernick's official San Francisco 49ers rookie jersey worn during his NFL debut in 2011 sold for $128,000 -- a world record for the most expensive NFL jersey sold at auction, the auction house said.

Last but not least, none other than former President Barack Obama broke a record. His high school basketball jersey, worn during his senior year at Punahou School as part of the 1979 Hawaii State Champion boys' varsity team sold for $192,000, a new world record for a high school jersey sold at auction, Julien's Auctions said. That previous record was held by LeBron James, whose high school basketball jersey sold for $187,500 last year.

An official Cleveland Cavaliers rookie year jersey, worn, signed, and gifted by James during his 2003-2004 rookie season, sold for $128,000 during this week's auction, too.

Sports memorabilia has continued to rake in big money at auction houses during the Covid-19 pandemic. In September, the hardwood floor from Kobe Bryant's final game was expected to fetch more than $500,000. It eventually sold for $631,000.