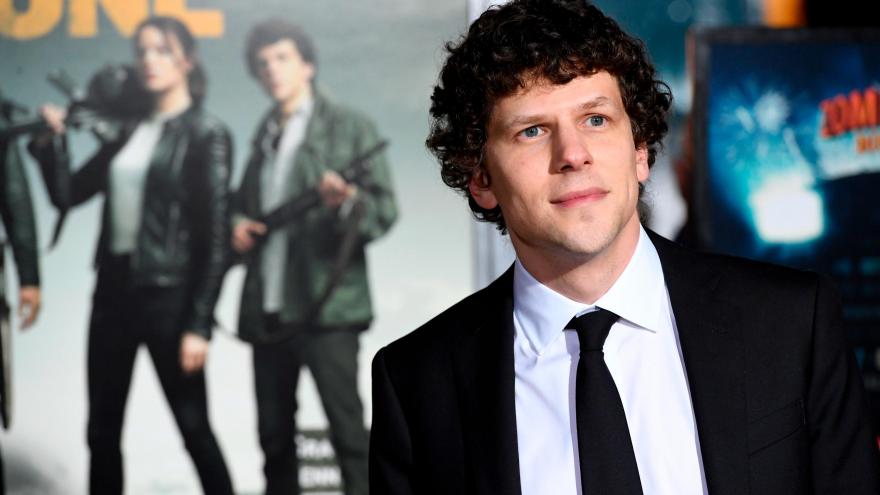 Frazer Harrison/Getty Images North America
(CNN) -- The coronavirus pandemic has closed retail shops, schools and so much more. But in Bloomington, Indiana, Middle Way House, a shelter for survivors of domestic violence, has stayed open with help from its dedicated staff and volunteers, which includes Oscar-nominated actor Jesse Eisenberg and his wife, Anna Strout.

And the organization is not alone.

On Giving Tuesday, the holiday normally scheduled for after Thanksgiving that is being celebrated early in response to the global health crisis, Eisenberg wants to spread the word that domestic violence shelters across the country have been and remain open and are in need of support.

Eisenberg and comedian/writer Amy Schumer teamed up to narrate a public service announcement with this message in mind that was released on Tuesday.

"We just want people to know that domestic violence is on the rise and that, even during this horrible time, shelters are open and that resources are available," he said.

Eisenberg, an actor known for his roles in "The Social Network" and the "Zombieland" films, has made Middle Way House a sort of charitable home of his for many years, having been introduced to the organization by his late mother-in-law, Toby Strout, who was its executive director.

In the years since taking his first tour of the facility, Eisenberg has dedicated significant time and money to raise awareness of its vital services -- transitional housing, childcare, legal advocacy, and mental health support, to name a few -- and the issue at its core.

As the pandemic strengthened its grip on the globe and the United States, Eisenberg and his family packed up their things in Los Angeles and headed for Indiana in an RV, where they self-quarantined for two weeks before jumping into action at the shelters.

Middle Way House, like many organizations, has been in need of staffing help because its college student volunteer base largely left town when classes were canceled.

"My wife and I are very involved on a day-to-day level -- painting and cleaning and mopping. And there's a lot of sterilization to be done, as you can imagine, right now -- door knobs and elevator buttons, et cetera," he told CNN. "I married a person who is a walking saint and so she has not spent a day in her life not doing something to help those most in need. So, for her, it was kind of without hesitancy that we should come here and figure out ways to help."

As much of the country adopted stay at home orders, those who are not safe at home were of particular concern, and, ultimately, those worries were warranted. Domestic abuse hotlines in several cities reported an increase in calls and cases in early April.

"Unfortunately, there's a kind of strange asterisks to all of this, which is that in a lot of areas, calls are actually going down because, oftentimes, people who are victims feel unsafe to make those calls when they're stuck in the same room as their abuser," Eisenberg said.

The need for places like Middle Way House is greater than ever, he said, and he's not the only one who believes so.

When Eisenberg and his wife arrived in Indiana, they got word of a generous donation from Schumer.

"Our friend, the actress and writer Amy Schumer, who's just obviously a brilliant talent and also has a wonderful heart, said, 'I'm donating $50,000 to your shelter.' No questions asked," he told CNN. "It was so unbelievable."

Eisenberg and Strout matched the donation and hope people who are able find organizations that help domestic abuse victims to support in their local communities.

"Shelters are open now 24 hours a day, seven days a week, 365 days a year, even during this pandemic," he said.