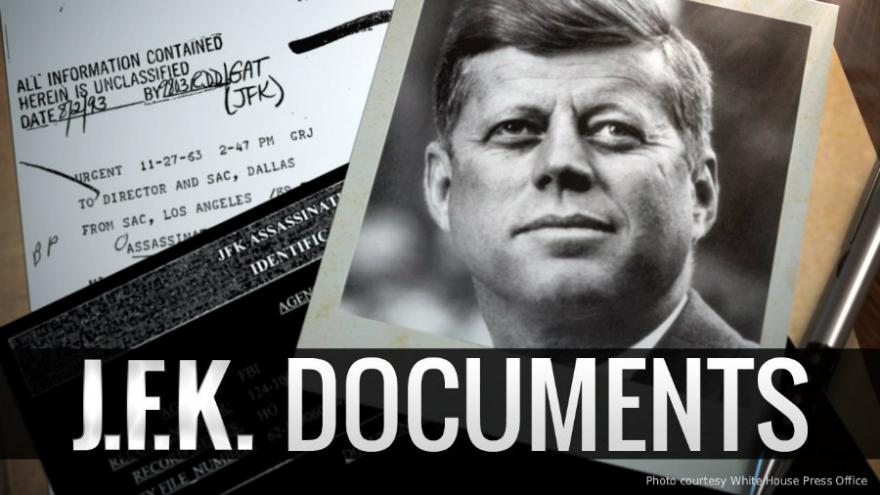 (CNN) -- Claims of a Soviet plot to assassinate President John F. Kennedy as early as 1962 -- which the CIA ultimately dismissed -- were included in a 1963 memo to a top US investigation official, this week's dump of declassified JFK assassination files reveals.

The memo to James Lee Rankin -- then-general counsel for the Warren Commission -- details a tip that the CIA had received in the immediate aftermath of the killing from "an individual who described himself as a Polish chauffeur for the Soviet Embassy (in Canberra, Australia)." The memo says that the individual "touched on the possibility that the Soviet government had financed the assassination of President Kennedy."

Crucially, the memo also notes "the receipt of a similar anonymous telephone call on 15 October, 1962" -- more than a year before the assassination -- by "a man believed to be the same person."

Richard Helms, then the CIA deputy director for plans and the author of the memo, wrote: "It appears that the caller, who professes to be the Polish chauffeur of a Soviet Embassy car in Canberra [Australia] first phoned in over a year ago, on 15 October 1962, repeat 1962. At that time, he told a story about five Soviet submarines carrying 400 to 500 Soviet soldiers on their way to Cuba. One purpose of this troop movement, he said, was to support the Governor of Mississippi. He added that there was a plot to pay one hundred thousand dollars to kill President Kennedy. Behind the plot, he said, were the 'Iron Curtain countries,' and 'communist men in England, Hong Kong, and probably other countries.'"

Helms continued, linking the 1962 call to the call received a year later.

"On 23 November 1963, repeat 1963, the day after the assassination of President Kennedy, and over a year after the first telephone call, a man believed to be the same person phoned the embassy again and spoke to the assistant naval attaché. The caller referred to his call a year back and stated he had said that the USSR had put up $100,000 for the assassination of President Kennedy."

As with many of the threads chased down by law enforcement and intelligence services in the wake of Kennedy's assassination, the CIA says it dismissed the claim.

Helms wrote that the CIA determined the call "was a crank" after being unable to identify "any Polish employee of the Soviet embassy, the automobile described by the caller as the one he drove, or the license plate number given by him."

But Helms also noted that the caller had told them that at the Soviet Embassy, "they often change plates, have 50 sets in reserve, and can change them in five seconds."

In closing, Helms wrote that "this conclusion" -- that the call was a crank -- "cannot be confirmed," and noted that authorities in Australia, the location of the Soviet Embassy where the caller professed to work, had continued to investigate the claims.

The government made thousands of files related to the JFK assassination public on Thursday, the latest installment in the collection's delayed release. Many of the documents in Thursday's release show the intelligence community grappling with -- and griping about -- investigations that further underscore covert activities in the Cold War as well as the difficulty they faced chasing down the torrent of tips the agency received after the assassination.