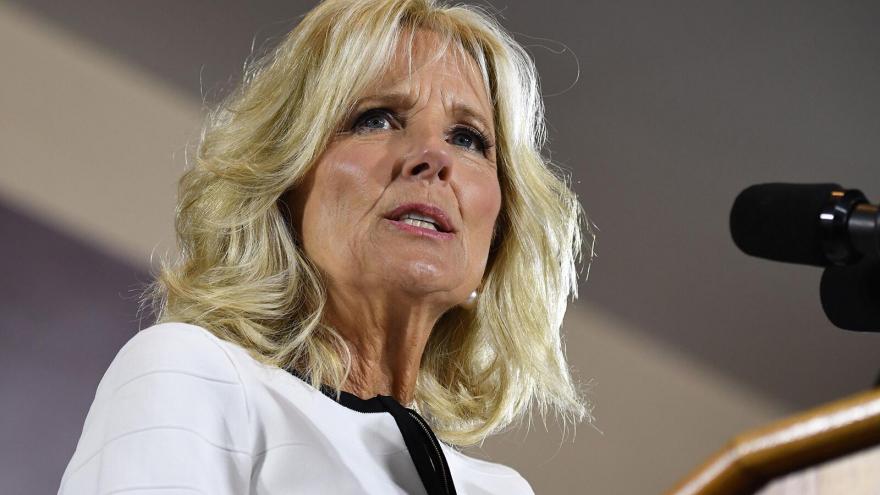 Doctor Jill Biden will be appearing alongside two Democratic gubernatorial candidates who are both locked in tight, contentious battles with their Republican opponents. Biden is show here in Pittsburgh, Pennsylvania, April 29, 2019.

(CNN) -- Jill Biden on Friday afternoon will flex her considerable campaigning muscle for the first time as first lady of the United States when she travels to New Jersey and Virginia.

The first lady will be appearing alongside two Democratic gubernatorial candidates who are both locked in contentious battles with their Republican opponents. For Biden -- who was asked by both of the candidates to travel to their states for the events, according to an official familiar with the requests -- the stump is a familiar arena and persuasive campaigning is one of Biden's sweet spots.

Joe Biden's presidential campaign knew it had a secret weapon in Jill Biden during the 2020 race. In Iowa alone, Jill Biden went to more than 70 counties in the early days of the former vice president's candidacy, singing the praises of her husband and his policies. She would campaign there for days on end, then wake in the wee hours of a Thursday or Friday morning, catch a flight from Des Moines back to Washington, hop in an Uber and be in her classroom at Northern Virginia Community College by 10 a.m.

In the eyes of the people who were trying to get her husband elected, that's how important Jill Biden was to the campaign. Now, New Jersey's first-term incumbent governor, Phil Murphy, will attempt to capitalize on her persuasive powers as well.

Murphy is up against Republican challenger Jack Ciattarelli, and the main sticking point is the state's response to Covid-19. Murphy supporters feel he handled it well; Ciattarelli's camp think New Jersey's lockdowns and mask mandates are overly restrictive. And on Friday evening, Biden will head from Murphy's event to Terry McAuliffe's in Richmond, Virginia, where McAuliffe -- a longtime friend of Biden world -- is in a close race for governor with Republican Glenn Youngkin, and the issues regarding Covid are much the same.

Both races are the only two gubernatorial elections before next years' midterms, and both could be harbingers of what Democrats might face come 2022. As such, Jill Biden, the campaign surrogate, is entering one of the most contentious political landscapes in recent American history.

Part of Biden's appeal, says one person who worked with her on the presidential campaign, is her relatability, a boon to undecided voters, particularly women.

"Jill was the most effective messenger for Joe Biden and his campaign knew that," says the former Biden campaign official. "There was a reason why she did three to four solo events a day in those early contests, on Zoom throughout the pandemic and in the general election."

"I think she appeals to working- and middle-class voters," says Kate Andersen Brower, an expert on first ladies and the author of "First Women: The Grace and Power of America's Modern First Ladies."

"There was never a sense that Melania Trump could tell you how much a gallon of milk costs at the grocery store, whereas I think Jill Biden absolutely knows the answer."

Jill Biden's casual familiarity with voters has been her most valuable commodity. Unlike Michelle Obama, a gifted public speaker whose effectiveness at campaign events led Obama's staff to nickname her "the closer" -- and was best-known for on-stage speeches to larger audiences -- Jill Biden's campaign skills were more about the more intimate venues.

During the presidential campaign, she found she was most effective at coffee shops, libraries or union halls -- again unlike Michelle Obama in that she would make herself available to local media at the same time. Jill Biden recognized, says another former Biden campaign official, she could earn free press just by being approachable instead of using fundraising dollars for on-air ads.

"The first lady is the best surrogate you can get, especially when they can connect, like Dr. Biden can, to bread and butter issues like education and child care," said Brower, who notes that as first lady, Laura Bush was a prolific fundraiser for Republicans in tight races, often hosting small, private, high-dollar events.

"Usually, first ladies have much higher approval ratings, so they can appeal to a broader audience than their husbands. They tend to be less polarizing because they usually do not weigh in on hot-button political issues," added Brower.

"There's nothing she won't do"

Biden is expected to give remarks for approximately ten minutes at both the Murphy and McAuliffe events on Friday, a person familiar with the planning tells CNN. It's an important, but light, lift for a first lady who as a political spouse of four-plus decades has had to at times get creative for votes.

"There's nothing she won't do for her husband, to get him elected," says a second person who worked on Biden campaigns for several years. "You name it, Jill will get out there -- she'll travel, she'll host a backyard barbeque, she'll talk to the angry school board member, she'll sit down with a senator."

The challenges of the pandemic were real for both presidential candidates during the 2020 campaign. Though much attention was given to Joe Biden's drive-in rallies, it was Jill Biden who did far more of them -- solo -- racking up a dozen drive-in events in parking lots across the country.

And in March 2020, it was Jill Biden who made the Super Tuesday headlines, jumping on the stage in California to physically stop a protester from coming toward her husband.

"I really do think her fierce physical defense of her husband is the most memorable moment from any of Biden's campaigns. She didn't hesitate," said Brower. "I think that people can relate to that fierce and innate quality of wanting to protect someone you love. In that case it was physical, but there have been times I'm sure when she's wanted to jump in and publicly defend him over something he's done or said that he's been criticized for."

The Friday gubernatorial events are likely just a teaser for a more robust schedule of campaign events to come for her as Democrats stare down midterm elections, said the official who worked with her on the presidential campaign.

"She's got that down-home Philly girl persona, it's a charm-offensive she knows how to operate, and it's not inauthentic," says the person.