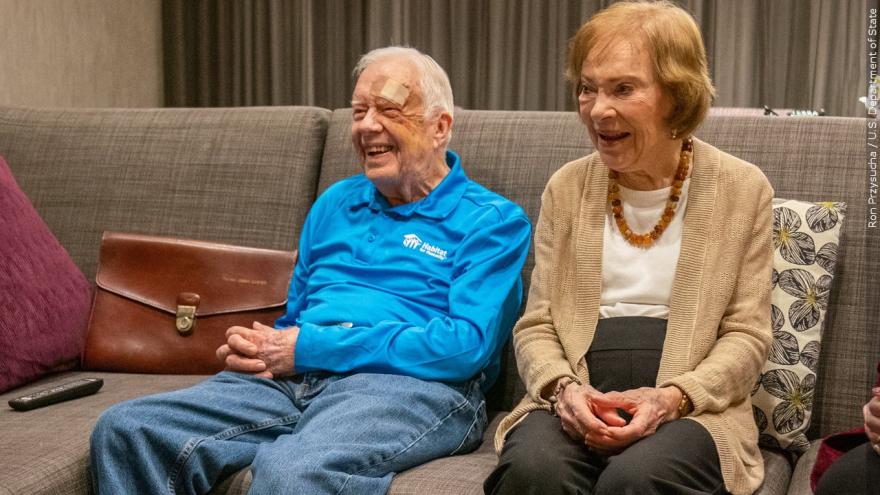 (CNN) -- Former President Jimmy Carter and former first lady Rosalynn Carter mark 75 years of marriage on Wednesday, a union that spans decades of public service from rural Georgia to the White House and beyond.

The couple has been side by side in a winding life journey defined by Carter's turn in the Oval Office but driven by the pair's unyielding passion for serving others. Together, the Carters have refined the role of former first family though their sprawling volunteer work building homes while still working to advance peace abroad.

Both a former president and a Nobel Peace Prize laureate, Jimmy Carter has called marrying Rosalynn "a pinnacle of my life."

"The best thing I ever did was marrying Rosalynn," he once said.

Beginning before Bill Clinton and Barack Obama were even born, the longest presidential marriage in history didn't begin with a simple "yes."

When Jimmy, then a fresh-faced US Naval Academy student, first proposed, Rosalynn Smith -- as she was known then -- rejected him because of a promise she made at 13 to her dying father that she'd finish college before marrying.

She kept her promise and they married only after she graduated from Georgia Southwestern College.

As Rosalynn recounted in her memoir, "First Lady from Plains," the pair grew up three years and three miles apart.

There were no girls in town who were her age. So Rosalynn became best friends with Jimmy's younger sister. "I thought he was the most handsome young man I had ever seen," she wrote.

The pair went on their first date in summer 1945, after which Jimmy told his mother, "She's the girl I want to marry." They did so the following year.

At every stop along the way to the nation's highest office, the Carters brought their unique blend of sincerity and conviction. After leaving active Navy duty in 1953, Jimmy spent time raising his children, running the family peanut farm and taking his first political steps, winning election to the Georgia state Senate in 1962.

By 1970, he had captured Georgia's governorship. Just six years later, he was elected president. And while Jimmy was the one who sat at the Resolute Desk, Rosalynn was a towering figure in the White House who wielded enormous influence.

Jill Stuckey, a longtime friend of the Carters, told CNN that the former President trusted Rosalynn "above and beyond everybody else."

"Rosalynn has always been that trusted adviser that is selfless. He knows for sure that she is looking out for others. And I don't know if President Carter would have been president without Rosalynn," Stuckey said.

Gerald Rafshoon, who served as White House communications director under Carter, recounted Rosalynn as the former President's "best adviser" who "isn't afraid to tell him when he's wrong, and when he's right she would fight to the end to help him."

Sometimes, he told CNN, the pair would speak to each other in Spanish during meetings just so they could talk one-on-one without anyone else interfering.

"We would say, 'Oh gosh, they're talking in Spanish. We've lost this argument,'" Rafshoon said.

And though Jimmy failed to capture reelection after a term defined by inflation at home and conflict abroad, the couple channeled their energy for political service into a remarkable run of volunteer work and global democracy advocacy.

"There's the feeling of wanting to redeem yourself," author and journalist Kate Andersen Brower said of Jimmy Carter's reelection loss. "And then I think there's a bit of anger there too -- and kind of feeling overlooked that has really kind of galvanized and spurred them into action in a way because they were one term. And I say 'they' because they're really a unit and a team."

For nearly four decades, the couple and their Atlanta-based organization -- the Carter Center -- has monitored hotspot elections, negotiated with despots, battled poverty and homelessness, fought disease and epidemics and promoted public health in the developing world.

And with the Jimmy and Rosalynn Carter Work Project with Habitat for Humanity, they have built, renovated or repaired more than 4,300 homes alongside more than 100,000 volunteers across 14 countries.

"I think that their post-presidency is what's going to define both of their legacies because it was so long," Brower said.

Another staple of the Carters' post-presidency life has been church. The couple has regularly attended Maranatha Baptist Church in Plains, Georgia, since leaving the White House in 1981. Jimmy Carter began teaching Sunday school there several years later and has delivered hundreds of lessons at the church.

They were each hospitalized in 2019 -- Jimmy for hip surgery after a fall on his way to go turkey hunting and Rosalynn taken in for observation and testing after feeling faint days later. The former President has also fought cancer in his liver and brain, announcing his cancer was gone in late 2015.

In his book "A Full Life," published earlier that year, Jimmy-- now the oldest living former president at 96 -- said he and Rosalynn were "blessed with good health and look to the future with eagerness and confidence, but are prepared for inevitable adversity when it comes."

Just a day after suffering the first of several falls in 2019, he was back out building homes for Habitat for Humanity, even with a black eye and 14 stitches. Rosalynn was by his side.

"They will never, ever give up once they set their mind to something, they put everything into it," Stuckey said. "And every day they try to eat right, exercise because they know the value of their presence to a project and they want to live as long as they can, so they can help as many people as they can."

Asked by CNN's Jake Tapper in 2015 what the secret to an enduring marriage is, Jimmy Carter responded, "First of all, it's best to choose the right woman, which I did. And secondly, we give each other space to do our own things."

"We try to be reconciled before we go to sleep at night, and try to find everything we can think of that we like to do together," he said. "So we have a lot of good times."