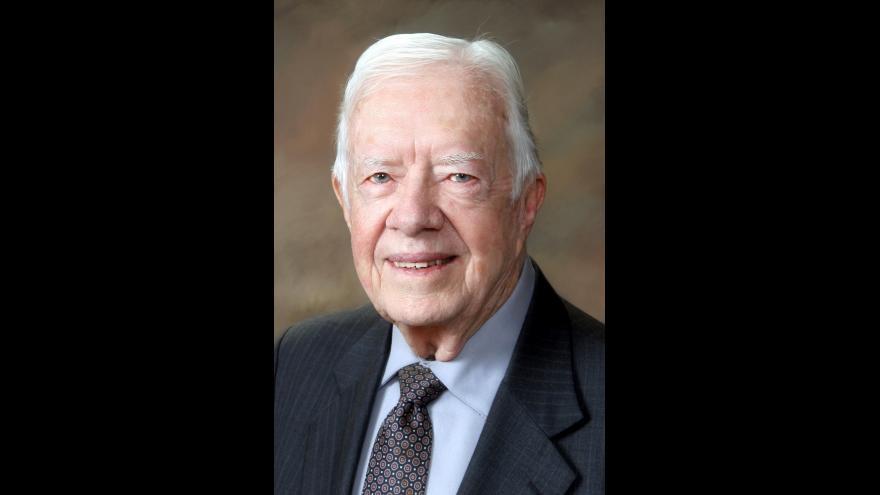 (CNN) -- Jimmy Carter, the son of a Georgia peanut farmer who'd go on to be America's 39th president, turns 96 today. He's the oldest living former US president -- and he's outlived every other occupant of the Oval Office.

At 96, the Nobel Peace Prize winner remains the longest-living president in US history, surpassing George H. W. Bush, who died in 2018 at 94.

Carter's kept busy since his last birthday. He was hospitalized for much of the latter half of 2019 to recover from brain surgery, infections and two falls. His health woes forced him to stop teaching Sunday school at Maranatha Baptist Church in Plains, Georgia, a tradition he took up after leaving office in 1981.

But by December, he was back in the church pews with his wife, Rosalynn. And before his brain surgery, he traveled to Nashville for the 36th Carter Work Project, a tradition that sees Carter build homes with Habitat for Humanity. He said then that building homes was his No. 1 priority.

The coronavirus pandemic forced him to cancel some of his planned projects at the Carter Center, his nonprofit, and with Habitat for Humanity. He and his wife posed in masks and urged supporters of the Carter Center to donate to local Covid-19 response efforts instead.

And this summer, when police killed George Floyd and reignited protests against racism and police brutality, Carter spoke out in support of those peacefully protesting.

"People of power, privilege, and moral conscience must stand up and say 'no more' to a racially discriminatory police and justice system, immoral economic disparities between whites and blacks, and government actions that undermine our unified democracy. We are responsible for creating a world of peace and equality for ourselves and future generations," he said.

He's certainly seen a lot in his 96 years: Serving in the nation's highest office, receiving the Presidential Medal of Freedom and several Grammy Awards for his audio books and continuing to build homes and advance peace abroad despite health issues.

But he and Rosalynn plan to spend his birthday quietly at home in Plains, a spokesperson for the former president tells the Atlanta Journal Constitution.

To celebrate the 39th president's birthday, fans can send him a virtual birthday message through the Carter Center, Carter's nonprofit that works to advance human rights worldwide.