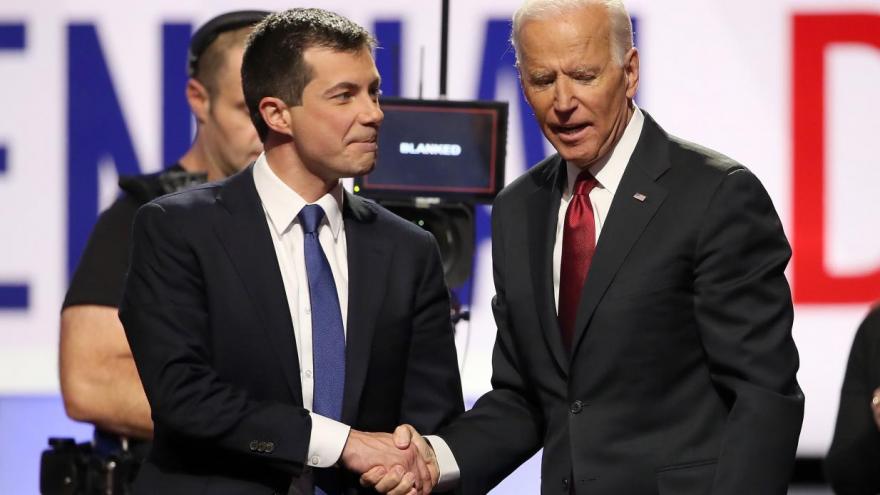 Just before Christmas, Democrats are still shopping for presidential candidates in Iowa, where the caucuses open the 2020 voting in six weeks. Joe Biden and Pete Buttigieg are going after the same voters, which brought them both to the town of Perry.

(CNN) -- When Pete Buttigieg took the stage here, Cheri Scheib was cheering from the front row, waving a campaign sign and listening intently. As he left, she gave him a high-five, smiling with satisfaction at her top choice in the Democratic presidential race.

"He's fantastic!" she exclaimed. Asked whether she was committed to supporting Buttigieg, she paused, saying: "Well, Joe Biden is also in town tonight. I'm going to go see what he has to say."

Just before Christmas, Democrats are still shopping for presidential candidates here in Iowa, where the caucuses open the 2020 voting in six weeks. Biden and Buttigieg are going after the same voters -- literally -- which brought both of them to Perry, a town about 45 minutes outside Des Moines, for back-to-back stops on Sunday.

For Democrats searching for a moderate path, the choice is stark: The 37-year-old mayor of South Bend, Indiana, who delivers a more upbeat and optimistic message, or a former vice president twice his age, who offers a dark warning about the consequences of President Donald Trump winning a second term.

Biden and Buttigieg stand out for neither tangling on the debate stage nor aiming attacks at one another on the campaign trail.

The Biden campaign believes it is too risky to sharply question Buttigieg's experience, advisers say, but it is closely watching whether some of the shine begins to fade from Buttigieg's rising candidacy after Sens. Amy Klobuchar and Elizabeth Warren confronted him at the final debate of the year.

Here in Perry, two hours after Scheib saw Buttigieg, she was standing in line to see Biden less than a mile away. By then, she had taken off two blue and yellow Buttigieg campaign buttons, preparing to welcome another presidential hopeful to town.

"Thank you for coming to Perry!" Scheib told Biden after his speech, where she and a small group of friends spent several minutes talking, hugging and posing for pictures with Biden. They didn't mention they had just seen his rival down the street.

Scheib, 63, said she values and admires Biden's experience and his grasp of the global challenges facing the United States. She described him as calm and collected, saying: "He's been there. That's what I appreciate about him. He's been around."

Yet the longevity of Biden is both an attribute and a concern -- often in the same conversation -- raised by more than a dozen voters who attended both campaign events. They acknowledged they are still struggling to decide which candidate to choose.

"I think both of them are fantastic. It's a hard decision," Scheib told CNN of Biden and Buttigieg. When pressed for which candidate she is more likely to support, she said: "I would say, I'm still kind of leaning toward Pete, but I have to think about it a little more."

Many voters said they are weighing the excitement for Buttigieg's candidacy to the experience of Biden's long record.

Pat McPherson, a retired nurse who was waving a Buttigieg sign at several points during his town hall meeting, applauded the intellect and vision of the young candidate. She beamed after hearing his speech, saying: "I think he might be the one."

But after Biden finished speaking, she said she was impressed by his empathy, reminded of his grasp on the world and his ability to dive right in on a myriad of challenges in the White House. She said she was captivated by Buttigieg, but seeing Biden up close will make her think a bit harder about her decision.

"I'm probably going to go with Mayor Pete," McPherson said. "But boy, there's just so much to be said for being able to hit the ground running on Day 1 and it's going to be a huge task."

One lingering question, she said, was whether Buttigieg would be able to unify the country as much as she believes Biden could.

"Would he be as effective as Joe Biden in healing?" McPherson said. "I really love Mayor Pete's platform, but Joe Biden could continue to heal and build on things."

There are many choices facing Democratic voters, including the progressive appeals from Warren and Sen. Bernie Sanders.

But for those who believe the path to winning back the White House is rooted more in the center, the decision between Buttigieg, Biden -- and Klobuchar -- is suddenly coming into sharper view.

Pat Murdy, a retired teacher who has seen nearly all of the candidates this year said it was time for Democrats to find a new leader as the party did with Barack Obama in 2008. She believes Buttigieg is that person, which she said she told him during a brief conversation Sunday.

"I thought Buttigieg did a better job on a bigger range of topics than Joe Biden," Murdy said. She admires Biden, but said she wasn't "wowed" by his speech, comparing it to "more of a fireside chat" on a string of serious topics rather than an outline for a broader vision.

After seeing Buttigieg, she signed a commitment card to support him at her precinct caucus on February 3. She was content with her decision -- until she came face-to-face with Biden near the end of his stop.

Standing a few feet away from a Christmas tree, he spent several minutes talking to Mundy and her friends, with laughs and smiles all around.

She walked away with tears in her eyes after telling him she would pray the Rosary for Biden, a fellow Catholic. She was overcome with emotion after Biden, who had attended Mass earlier that day on the campaign trail, pulled a small Rosary from his pocket and momentarily pressed it into her hands.

As she wiped her eyes, Mundy said she wanted to take back something she said earlier in the day: She worried Biden was too old to be president.

"I'm a little old, too, and I'm in pretty good shape," Mundy said. "He looks like he's in dynamic shape."

While she said she still found Buttigieg more charismatic, she wondered for the first time whether Biden was what the country needed at this moment.

"He's somebody that you can look up to -- a fatherly influence," Mundy said. "I have a terrific decision facing me and it won't be made lightly."

As she spoke, Biden was still mingling with Iowans, more than an hour after he finished speaking, making clear his strategy is trying to win over one voter at a time.