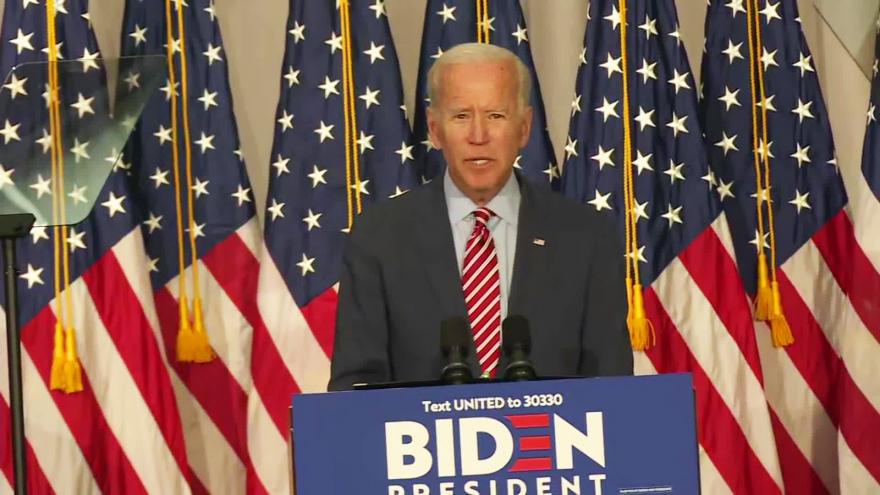 (CNN) -- Joe Biden's presidential campaign says President Donald Trump is "lying about the one Democrat he doesn't want to face" in the first new spot to be included in the former vice president's $6 million broadcast and digital advertising push across the four early-voting states.

The 30-second ad, titled "Unhinged," focuses on Biden's response to Trump's public and private efforts to get foreign governments to investigate Biden and his son Hunter. It will run in Iowa, New Hampshire, South Carolina and Nevada as a digital ad and in some of those television markets.

The ad is geared to show a Democratic audience that Biden, who polls show battling Sens. Elizabeth Warren of Massachusetts and Bernie Sanders of Vermont at the top of the polls, is the most electable candidate -- or at least the one Trump fears the most -- in the party's 2020 field.

It is also a response to the Trump campaign's ads in early states that include false claims about Biden, his son and Ukraine and hit Democrats for beginning impeachment proceedings over Trump's effort to pressure the Ukrainian President to investigate the Bidens. There is no evidence of wrongdoing by either Biden in Ukraine.

The Trump campaign is doing an ad blitz in the same four states starting this weekend, going after Biden. The Biden-focused ad buy totals more than $1 million, campaign communications director Tim Murtaugh confirmed to CNN. That buy is part of an overall $10 million buy from the campaign and Republican National Committee.

After a narrator says Trump is lying about Joe Biden, the ad features footage of Biden's speech this week in Reno, Nevada, in which he forcefully responded to Trump.

"Now, fearful about his reelection, he's becoming more unhinged," Biden says in the video. "He wants a campaign on his terms. He imagines that this tactic will allow him to pick his opponent and face only the candidates he thinks he can beat."

The ad, which will hit the airwaves early next week, comes after Biden announced he had raised $15 million in 2019's third quarter -- putting him behind Sanders, Warren and South Bend, Indiana, Mayor Pete Buttigieg but ahead of other Democratic 2020 hopefuls.

Clarification: This story has been updated to note that while the ad will run digitally in all four early-voting states, it might not be televised in all four.