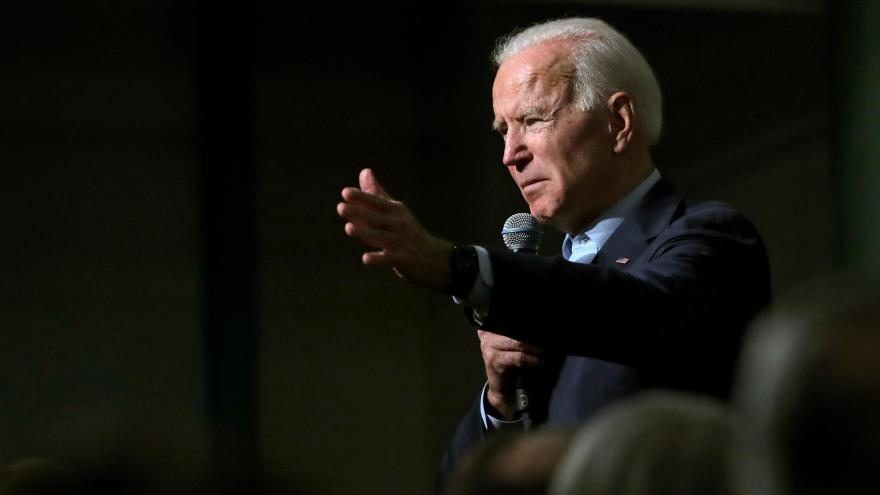 Editor's note: Jeff Yang is a frequent contributor to CNN Opinion, a featured writer for Quartz and other publications, and the co-host of the podcast "They Call Us Bruce." He co-wrote Jackie Chan's best-selling autobiography, "I Am Jackie Chan," and is the editor of three graphic novels: "Secret Identities," "Shattered" and the forthcoming "New Frontiers." The opinions expressed in this commentary are his. Read more opinion on CNN.

A couple of days ago, former Vice President Joe Biden's presidential campaign was on life support. Saturday night, with just a fraction of the South Carolina primary vote counted, it seems that Biden has won a commanding victory in a state whose demographic makeup truly reflects the diversity of the Democratic Party base.

South Carolina was always at the heart of Biden's electoral strategy — his first opportunity to establish himself as the clear choice of the party, positioned right before the critical delegate binge of Super Tuesday.

But that was before Vermont Sen. Bernie Sanders built a growing head of steam with a near-win in Iowa and dominant victories in New Hampshire and Nevada. Meanwhile, mediocre debate performances, a series of embarrassing gaffes, fourth and fifth-place finishes in the first rounds of voting, and the disruptive entry into the race of former Mayor Mike Bloomberg set Biden back on his heels.

If Biden's South Carolina "firewall" had shattered, his presidential bid would've moved rapidly from intensive care to the coroner's office. It held. And his campaign's messaging calling him the new "comeback kid" has already begun.

What remains to be seen is what South Carolina means for the rest of the field.

Sanders, who'd recently been trying on a mantle of inevitability for size, clearly now faces a different kind of fight. Moderate voters may well snap back into the Biden camp, and other centrist candidates may feel the pressure to make an increasingly hard decision: Whether to stay in the race and continue to fragment the vote against Sanders — or bow out and lend support to Biden.

It seems almost certain that Minnesota Sen. Amy Klobuchar — her brief surge likely over — will consider folding her campaign after Super Tuesday. Billionaire Tom Steyer has now dropped out, and former Mayor Pete Buttigieg may well debate ending his run.

The wild cards remain Bloomberg — a centrist for whom money is no barrier — and Massachusetts Sen. Elizabeth Warren, the only progressive alternative to Sanders. Her campaign has been hurt by media dismissal, unlucky timing (what would this race look like if so many Nevadans hadn't already voted by the time of her stunning debate victory in the state?) and, in all candor, misogyny.

Given a decent showing on Super Tuesday (perhaps strong seconds in California and Colorado or a win in her home state of Massachusetts), Warren likely has the resources to keep her fight going. Her passionate supporters, myself included, want her to stay in — given her critically important anti-corruption message, Sanders' recent heart attack (from which he says he's fully recovered) and Warren's status as the most frequent second choice of Democratic voters for candidates across the ideological spectrum.

But it's likely that if Sanders comes in well behind Biden in South Carolina and finds his momentum blunted, Warren could find herself playing a critical role in shaping the outcome of a race that could well end with a contested battle on the Democratic convention floor.

Keeping her in the race is likely in Biden's interests, as a critical progressive counterweight to Sanders.

Yet Sanders might strategically prefer her to stay in — she's the most devastatingly effective foil for Bloomberg. She's also a potentially important aggregator of delegates that Sanders might otherwise lose to Buttigieg and others, assuming that he believes he can dependably reconcile with his longtime ally-turned-rival as the race comes toward its conclusion.

And while the path to victory is admittedly narrow for Warren herself, the cycle has been surprising enough that one can't seem to count anyone out. Coronavirus outbreaks, unexpected news events and rebalancing of support from candidates dropping out of the race all still hold the possibility of changing the game dramatically before the convention comes.

Either way, the action seems like it's only just beginning — and the endgame is anyone's guess.