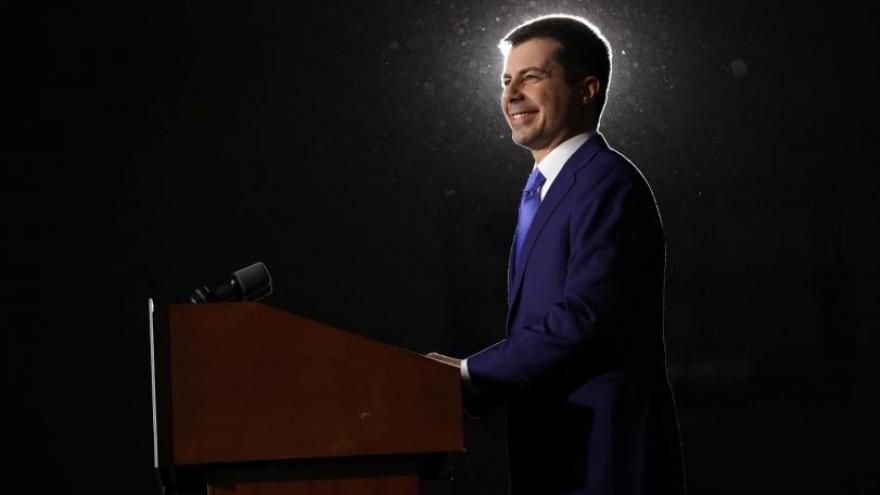 (CNN) -- Joe Biden will nominate Pete Buttigieg to be his transportation secretary, the president-elect said in a statement on Tuesday, elevating the former South Bend, Indiana, mayor and 2020 Democratic presidential candidate to a top post in the federal government.

Buttigieg would be the first Senate-confirmed LGBTQ Cabinet secretary should his nomination make it through the chamber.

"Mayor Pete Buttigieg is a patriot and a problem-solver who speaks to the best of who we are as a nation," Biden said. "I am nominating him for Secretary of Transportation because this position stands at the nexus of so many of the interlocking challenges and opportunities ahead of us."

Biden added that he sees the Department of Transportation as the "site of some of our most ambitious plans to build back better" and that he trusts "Mayor Pete to lead this work with focus, decency, and a bold vision."

The choice -- which represents the first time the President-elect has called on one of his former Democratic presidential opponents to join his administration as a Cabinet secretary -- vaults a candidate Biden spoke glowingly of after the primary into a top job in his incoming administration and could earn Buttigieg what many Democrats believe is needed experience should he run for president again.

The role of transportation secretary is expected to play a central role in Biden's push for a bipartisan infrastructure package.

Buttigieg is seen as a rising star in the Democratic Party but someone who lacked an obvious path to higher elected office given the continued rightward shift of his home state of Indiana.

As a presidential candidate, he rolled out a $1 trillion infrastructure plan that prioritized upgrading the country's crumbling infrastructure and expanding broadband internet access through payment to state and local governments. Buttigieg often spoke about infrastructure on the campaign trail from the perspective of a small mayor, arguing that local governments like the one he once ran needed people in Washington who understood their needs and issues.

And Buttigieg, as mayor, spearheaded a number of infrastructure projects, including a program to make the city's sewers "smart" as a way to prevent flooding and a plan that got rid of a number of one-way streets in South Bend's downtown in an effort to revitalize the area. The former mayor talked up both of these programs on the campaign trail.

Infrastructure reform had been a priority of Trump's earlier in his four years in office, but if routinely took a back seat to other issues.

Buttigieg often faulted the administration for failing to do anything on infrastructure, writing in his plan on the issue that the Republican President's team was "incapable of keeping its promise to pass major infrastructure legislation, and critical projects around the country are stalled because of it."

Buttigieg emerged as the leading candidate for the transportation secretary role in recent days. The former mayor was considered for a host of other posts, including US ambassador to the United Nations and commerce secretary.

Buttigieg mounted a stout presidential campaign in 2019 and 2020, despite starting with very little national recognition or political experience. The former mayor narrowly won the Iowa caucuses, becoming the first gay presidential candidate in American history to win primary delegates from a major party. He ended his campaign shortly before Super Tuesday in March, after his path to victory had clearly closed following a poor showing in South Carolina.

Although Buttigieg and Biden enjoyed a mostly friendly relationship during the primary, the Biden campaign did put out a mocking digital ad that diminished the former mayor's experience, including the work he did to revitalize downtown South Bend.

"When President Obama called on him, Joe Biden helped lead the passage of the Affordable Care Act," the narrator of the ad said. "And when parkgoers called on Pete Buttigieg, he installed decorative lights under bridges, giving citizens of South Bend colorfully illuminated rivers."

Still, after ending his presidential campaign, Buttigieg endorsed Biden and spent much of the general election headlining fundraisers and events for the former vice president.

Biden praised Buttigieg at a March event in Dallas, comparing him to his late son Beau Biden.

"I know that may not mean much to most people, but to me it's the highest compliment I can give any man or woman," Joe Biden said at the time.

Prior to running for president, Buttigieg had served as the mayor of South Bend since 2012. He did not seek reelection in 2019.

During his tenure as mayor, Buttigieg in 2014 deployed to Afghanistan as an intelligence officer. Prior to running for office, Buttigieg was a consultant at McKinsey & Company in Chicago.

Buttigieg came out as gay in a 2015 essay for the South Bend Tribune while serving as mayor. Later that year, Buttigieg won reelection.

His expected nomination is a historic moment for LGBTQ Americans. Advocacy groups had been pressuring the Biden transition to make history and nominate an LGBTQ American to a top Cabinet post.

Buttigieg often spoke about being gay on the campaign trail and for many LGBTQ Americans, he became a symbol of progress and his marriage to Chasten Buttigieg and presidential campaign normalized being gay and married in presidential politics.

"Being married to Chasten has made me a better man," Buttigieg said of his husband in 2019. And he used their marriage, which just years ago would have been illegal, to fault Republicans like Vice President Mike Pence, the former governor of Indiana, who has a long history of comments of opposing same-sex marriage.

"And yes, Mr. Vice President, it has made me closer to God," Buttigieg said. "If you have a problem with who I am, your problem is not with me. Your quarrel, sir, is with my creator."

This story has been updated with more details on Buttigieg's background.

CLARIFICATION: This story has been updated to reflect that Buttigieg is the first of Biden's former Democratic presidential opponents to join the incoming administration as a Cabinet secretary.