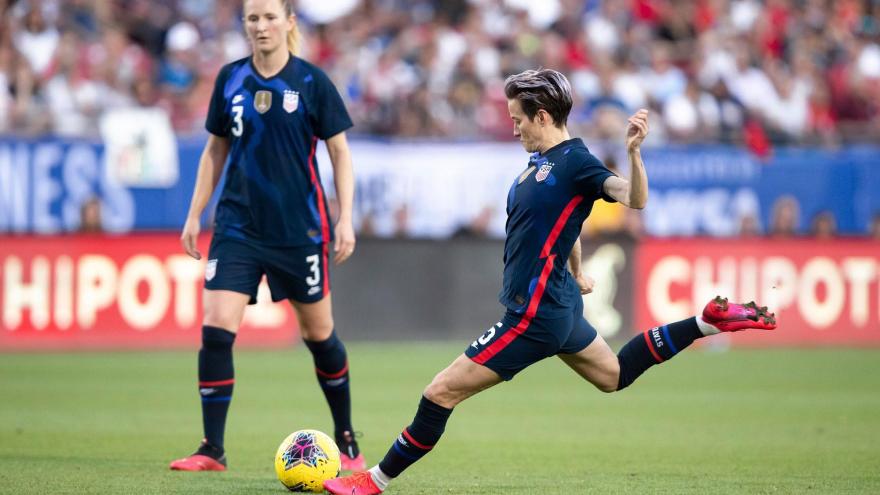 Former Vice President Joe Biden pledged to cut funding to the US Soccer Federation if women don't get equal pay to their male counterparts.

(CNN) -- Former Vice President Joe Biden pledged to cut funding to the US Soccer Federation if women don't get equal pay to their male counterparts.

The team's fight for equal pay was rejected on Friday when a federal judge dismissed the players' claims that they were paid less than the men's national team.

In a tweet Saturday afternoon, the presumptive Democratic presidential nominee encouraged the women's national team to not give up their fight.

"This is not over yet. To @USSoccer: equal pay, now. Or else when I'm president, you can go elsewhere for World Cup funding," he wrote on Twitter.

This isn't the first time Biden has backed the USWNT. In 2019, he tweeted his best wishes to the team ahead of their match against Chile in the World Cup.

"As we cheer them on in the World Cup, we must support their fight off the field for equal pay," he wrote on Twitter. "In 2019, it's past time we close the pay gap and ensure women get paid as much as men. #OneNationOneTeam"

The USWNT originally filed a lawsuit against the US Soccer Federation in March 2019, with 28 members of the team listed as plaintiffs.

Friday's ruling was issued in response to a motion for summary judgment to dismiss the lawsuit by the federation in US District Court for the Central District of California, according to a court filing.

The suit alleged the US Soccer Federation's payment practices were unfair and discriminatory.

Judge R. Gary Klausner said Friday in his decision that members of the USWNT failed to prove any sort of wage discrimination under the Equal Pay Act. He said the women's team played more games and made more money than the men's team.

Molly Levinson, a spokeswoman for the players, said they will appeal the decision. A trial is scheduled for June 16.

"We are shocked and disappointed with today's decision, but we will not give up our hard work for equal pay," Levinson wrote on Twitter on Friday. "We are confident in our case and steadfast in our commitment to ensuring that girls and women will not be valued as lesser just because of their gender."