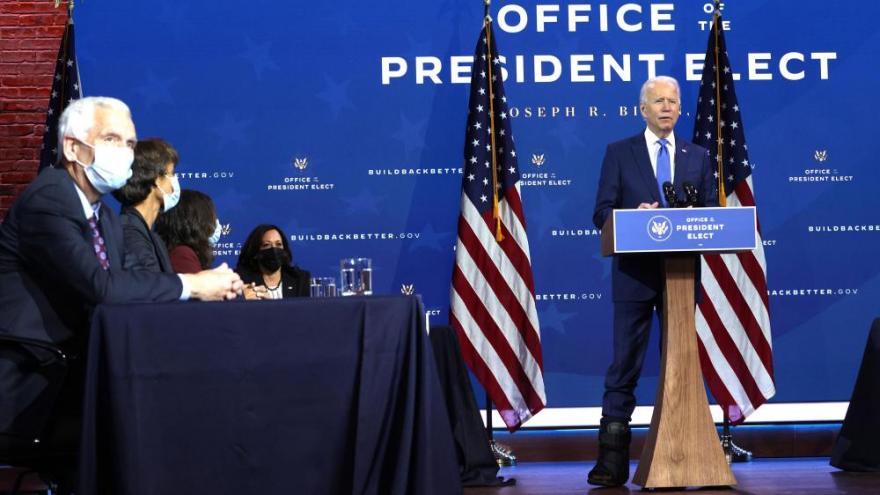 President-elect Joe Biden speaks during an event to name his economic team at the Queen Theater on Dec. 1 in Wilmington, DE.

(CNN) -- Joe Biden's plan to remake America's crumbling infrastructure as President is expected to increase the pressure on three key Cabinet picks to work together for results that Americans can see clearly and quickly in the early months of his presidency, sources told CNN.

Biden sees a sweeping infrastructure package -- a bipartisan issue that is often promised but rarely delivered -- as a central legislative priority for his first year in office and critical to his economic recovery plan, sources familiar with the transition's deliberations told CNN, compelling the Biden transition team to view his picks to lead the Department of Transportation, the Department of Commerce and the Small Business Administration as a sort of unit that will need to act in tandem quickly and aggressively to enact the goal. Biden has already begun to speak with members of Congress about a possible proposal, too, including with House Ways and Means Chairman Richard Neal.

A far-reaching infrastructure plan, a commitment that some Democrats believe is second only to coronavirus relief on Biden's legislative priority list, would check a number of promises for the President-elect.

Biden pledged throughout the campaign to get Americans back to work as quickly as possible, something a jobs-focused infrastructure proposal could do. The plan could be an area to work with Republicans, with infrastructure reform widely seen as the most likely area that the two parties could strike a deal. And an infrastructure bill could also back up Biden's promises to address the climate crisis, a move that would enthuse Democrats.

"Those three entities are going to have a lot of relevance when it comes to building back the economy," said a source involved in the Biden transition. "Overall, that's the notion of the conversation, making sure these agencies work well together and there's a lot of inter-agency relationships to help us move things more quickly."

The source added: "I think that's where we can really work in a bipartisan way and really get a lot of things done quickly."

Biden himself acknowledged the prospect of infrastructure being an area where he could work with Republicans early in his administration in an interview with CNN on Thursday.

"There's a number of things I've already spoken to several (Republican senators) about," Biden said. "For example, there's an overwhelming consensus we have to do the things to work on to deal with infrastructure."

It remains unclear whether an infrastructure proposal will be part of a broader stimulus push or a stand-alone bill, and the Biden transition does not want to be seen as negotiating a plan before they step into office.

The route toward a major infrastructure package as well as additional Covid-19 relief will involve delicate strategic calculations. Until the two Georgia runoffs are settled next month -- potentially shifting partisan control of the Senate -- those calculations can't conclusively be made.

From one angle, combining Covid relief and infrastructure allows each issue to help propel the other and serve Biden's "build back better" theme.

"Makes a clear jobs argument," as one Obama administration veteran put it.

But House leaders who saw their Democratic majority shrink last month worry about creating a package too big to succeed, at least in the Senate.

"Doing them together will scare off too many Republicans because of the big number," said one member of the House leadership.

Jamal Brown, a spokesperson for the Biden transition, said the President-elect "believes an integral component to jumpstarting our economic recovery is with an infrastructure plan."

Brown said the focus of such a plan would look to rebuild "our nation's crumbling roads, bridges and highways by creating millions of good-paying union jobs while at the same time moving the U.S. to net-zero greenhouse emissions and a more equitable clean energy future."

Biden continues to weigh his options on who will lead these three agencies,

Two of Biden's former presidential opponents -- Buttigieg and Yang -- are being considered for Commerce, multiple sources told CNN. Former Virginia Gov. Terry McAuliffe had been in the running for the job, sources said, before ruling out seeking a position in the Biden administration.

And as names continue to swirl over who will lead these agencies, Lance Bottoms has emerged as a top contender to run the Small Business Administration, a source said.

The most controversial name being considered is Emanuel as an option for transportation secretary, which has angered both progressives and civil rights groups like the NAACP. One particular issue for Emanuel is his handling of the police shooting of Laquan McDonald, which was the leading reason he did not seek a third term as mayor.

Biden appointing Emanuel as transportation secretary "would be offensive to the African Americans across the country. He is someone who as mayor covered up evidence from a police killing until after he was reelected," NAACP President Derrick Johnson told CNN.

CNN reported in November that Emanuel has expressed interest in the job, telling allies that the nation's infrastructure challenges are so dire that a person with experience from the executive and legislative branch would be an asset.

The Biden team is also considering Garcetti to lead the Transportation Department, sources said. Transportation is also seen as another possible landing spot for Buttigieg.

And outside groups are leaning on the Biden team with other names. Progressive groups like the Sunrise Movement and Justice Democrats are pushing Illinois Rep. Jesus "Chuy" Garcia, while some unions are pushing John Porcari, the former Maryland Transportation Secretary who served as Deputy Secretary of Transportation under Obama.

Biden has, so far, favored experts over politicians in the Cabinet selections he has already made, leading to the possibility that some unknown names could emerge as leading contenders in the coming weeks.

At play in all of this is also Biden's pledge to build a diverse Cabinet, one that he says reflects the diversity of the United States. To date, Biden has named a number of diverse picks to top jobs, but some civil rights groups have begun ratcheting up their pressure on Biden to keep his commitment.

"I'm going to keep my commitment that the administration, both in the White House and outside in the Cabinet, is going to look like the country," Biden told CNN on Thursday.

The prospect of Biden prioritizing infrastructure has enthused Democrats in Congress, especially those who were hopeful such a plan would be a bridge they could build to the Trump administration. But talks around an infrastructure plan with Trump and Republicans broke down in 2019 and the repeated claims by the White House that the coming week would be "infrastructure week" became a running joke for Democrats and Republicans alike.

In the days after Biden was elected, House Ways and Means Chairman Neal had a conversation with the President-elect about where he wanted to go on policy, he told CNN. Infrastructure became a place where the two men agreed would be good to start.

"They want to go big on this," said Neal, a Massachusetts Democrat.

In subsequent weeks, Neal has been in constant communication with Biden's staff, laying out some early parameters of what a bill could look like. The price tag of an infrastructure package would likely fall between $1.5 trillion and $2 trillion.

Neal told CNN after his conversations with Biden and his team that he would like the plan to be "as big as we can go," but he is pushing the Biden administration to start with a bill that already passed out of the House: The Moving Forward Act that had a price tag of around $1.5 trillion and included a green energy component. Neal said the Biden team has been amendable to that suggestion.

The talks between Democrats and Republicans that broke down in 2019 fell apart when the conversation moved toward how to pay for the plan. Rebuilding roads, bridges and train stations is a popular idea, but who gets that money and who is paying for it remain massive sticking points. Some industry experts are hopeful that the ability to tie infrastructure reform into creating jobs in the wake of the economic calamity wrought by coronavirus could make the large price tag more palatable.

Democrats have suggested raising taxes on some of the highest earners as a way of financing the plan, but a tax increase even on corporations and millionaires isn't likely to make it through a Republican-controlled Senate if Democrats don't win both Senate seats in Georgia come January.

There have also been division among members about what an infrastructure bill would even look like.

Lawmakers from rural areas are likely to focus on expansion of rural broadband, building out water projects and rebuilding highways while Democrats from more urban areas would look to build high-speed transit and, as Senate Democratic Leader Chuck Schumer has laid out, any project would need to have a climate policy component that Republicans would likely bristle at.