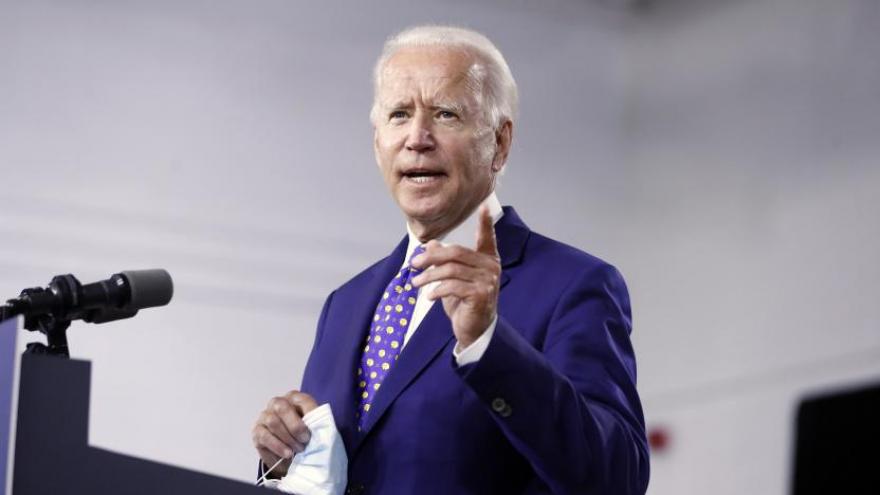 (CNN) -- Joe Biden will no longer accept the Democratic presidential nomination in Milwaukee, Wisconsin, officials said Wednesday, in the latest and strongest sign that the Democratic National Convention will be almost entirely virtual due to the ongoing coronavirus pandemic.

Biden will instead accept the Democratic nomination for president from his home state of Delaware, according to the Democratic National Convention Committee.

"From the very beginning of this pandemic, we put the health and safety of the American people first. We followed the science, listened to doctors and public health experts, and we continued making adjustments to our plans in order to protect lives. That's the kind of steady and responsible leadership America deserves. And that's the leadership Joe Biden will bring to the White House," said Democratic National Committee Chair Tom Perez said in a statement.

The convention is slated to take place from August 17-20, after Democrats pushed their convention back by a month because of the coronavirus pandemic. Convention programming will air for two hours each night from 9 p.m. to 11 p.m. ET. Much of the Democratic convention was already expected to be virtual and a majority of speeches and segments were already going to take place in locations across the country.

Health officials in Wisconsin have informed the Democratic National Convention Committee that speakers for the 2020 Democratic convention should no longer travel to Milwaukee due to the coronavirus, a source familiar told CNN.

That includes Biden and his eventual running mate. Neither will travel to Milwaukee, the source said.

This is the latest -- and strongest -- sign that the Democratic convention is going to happen almost entirely virtually.

This comes after ongoing consultations between health officials and convention officials about the pandemic.

The only speakers originating from Milwaukee now, a party official said, will be Wisconsin voters and officials who are part of the program. They will be prominent in the convention speaking lineup, along with people from other swing states. But no major speeches will be delivered from Milwaukee.

"The fear of community spread in Milwaukee, with media, production teams and party officials was just getting to be too much," a senior Democratic official told CNN. "We don't want to risk anyone's health for this."

The change in locations for Biden's speech is the most significant change, along with his running mate. The vice presidential nominee will deliver a speech from a location to be determined after she is selected, the party official said.

The change is yet another blow for Milwaukee. But the official said the rise in Wisconsin cases -- as well as coronavirus cases across the country -- led to the change.

The announcement that Biden will accept the nomination in Delaware comes the same day that President Donald Trump said he was considering delivering his Republican National Convention speech from the White House. Trump had scrapped his plans to deliver the speech in Charlotte, North Carolina, after clashing with the state's Democratic governor over coronavirus guidelines affecting the convention. Convention planners were considering the White House South Lawn for the acceptance speech, The Washington Post reported Tuesday night.

The coronavirus pandemic has upended the 2020 election cycle, forcing Democrats and Republicans to change the way they campaign and scrap plans for in-person political conventions. The conventions are usually multi-day fundraising bonanzas for each party and are attended by thousands and have run more than $100 million each.

The Democrats announced in June they would be considerably scaling back their party's convention, with organizers calling it a "Convention Across America," with speeches and music and other appearances from locations and major landmarks across the country. Milwaukee is a critical city inside a crucial battleground state.

Convention delegates and members of Congress were advised not to travel to Milwaukee. Organizers informed delegates they would allow for nearly two weeks of virtual voting ahead of the convention.