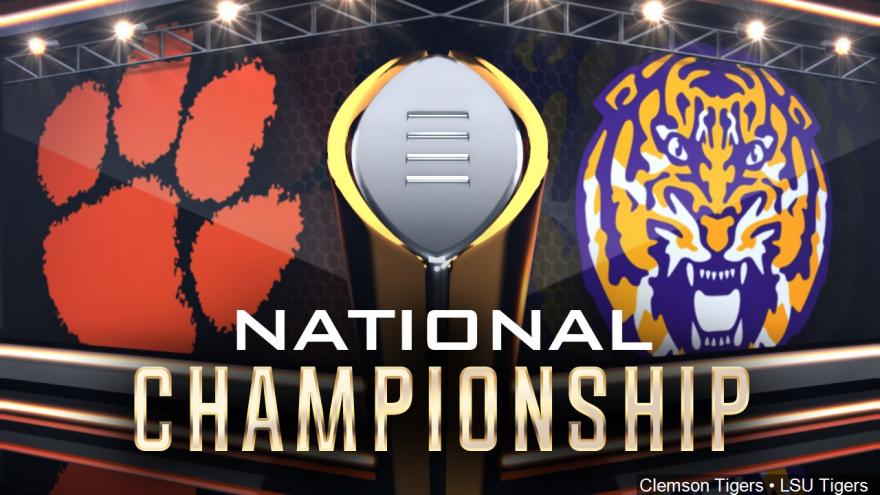 (CNN) -- Before the 2019 season started, members of the LSU football team, knowing the national championship game would be in New Orleans, about 80 miles away from their campus, made a resolution: They would not be denied.

They also were confident and prepared, all the way down to knowing their championship ring sizes.

On Monday, in front of a pro-LSU crowd -- as well as President Donald Trump -- the Tigers of Baton Rouge capped off a dominant season, winning the College Football Playoff national championship game, beating last year's champion, Clemson, 42-25 at the Mercedes-Benz Superdome to finish 15-0.

"We weren't going to let someone come in here and steal this from us in our home state," LSU quarterback Joe Burrow, completing one of the best seasons by any college football player in history, said.

It's a location where LSU has had previous success, having won national championships in the Superdome in the 2007 and 2003 seasons during the Bowl Championship Series era. This is LSU's first appearance in the College Football Playoff, which began in the 2014 season.

It's also the first national title as a head coach for Louisiana native Ed Orgeron.

"I grew up wanting to be the head coach of LSU," Orgeron said. "I'm so proud of the state of Louisiana. We've had support from the governor, from the President, from everybody that loves LSU. I'm just so happy for the people from Louisiana. But you've got to give the credit to the football team. They've been working for one year. They deserve this day."

On Monday, after throwing his fifth touchdown pass of the night, setting a record in a College Football Playoff national championship game, Burrow pointed to his ring finger.

"We already got fitted for them," Burrow revealed to ESPN after the game. He wears a size 10.5.

This year, LSU won in historic fashion, with seven of LSU's 15 wins coming against teams that were ranked in the top 10. Ranked first in the nation in scoring and total offense, LSU had trailed just five times all season -- and never in the fourth quarter -- entering Monday night's title game.

However, in an unfamiliar sight, LSU initially got pushed around by Clemson and was down 17-7 -- LSU's biggest deficit of the season -- in the second quarter. But led by Burrow, LSU would score 21 unanswered points to close the half. Clemson would get within three in the third quarter but could get no closer.

Burrow, winner of the Heisman Trophy and likely top overall pick in this spring's NFL draft, is from Athens, Ohio and graduated in three years from Ohio State. He didn't get a lot of playing time when he was with the Buckeyes, so he transferred to LSU in 2018.

But while it was known Burrow had talent, the college football landscape didn't expect this. On Monday, Burrow broke the NCAA single-season record for passing touchdowns in a season, with 60. For the night, Burrow completed 31 passes on 49 attempts for 463 yards, five touchdowns and no interceptions. Burrow also rushed for 58 yards and one score.

For Clemson, the 2019 season narrative was that even though the Tigers kept winning, they had a weak schedule and hadn't been challenged. They entered the College Football Playoff ranked third, behind fellow undefeated teams in No. 1 LSU and No. 2 Ohio State.

They passed their first test, in the College Football Playoff semifinals against the Buckeyes, as Clemson rallied from a 16-0 deficit to win the PlayStation Fiesta Bowl in Glendale, Arizona.

But they could not handle LSU in New Orleans. Clemson's 29-game win streak has been snapped, denying the Tigers back-to-back titles and their third in four years. It's also the first loss for sophomore quarterback Trevor Lawrence, already seen as potentially the No. 1 pick of the 2021 NFL draft, who had gone 25-0 as Clemson's starter.

"A moment like this happens and you've got to -- man, it sucks, but you've got to look back on what you've done, and we've done some great things, and we've got a lot more in store ahead for sure," Lawrence said. "But it's just you've got to look back and enjoy all the things you did accomplish because what we were able to do is pretty amazing to be a part of. Just going to miss this group of guys, and I hate how it finished. But man, we did some really amazing things."