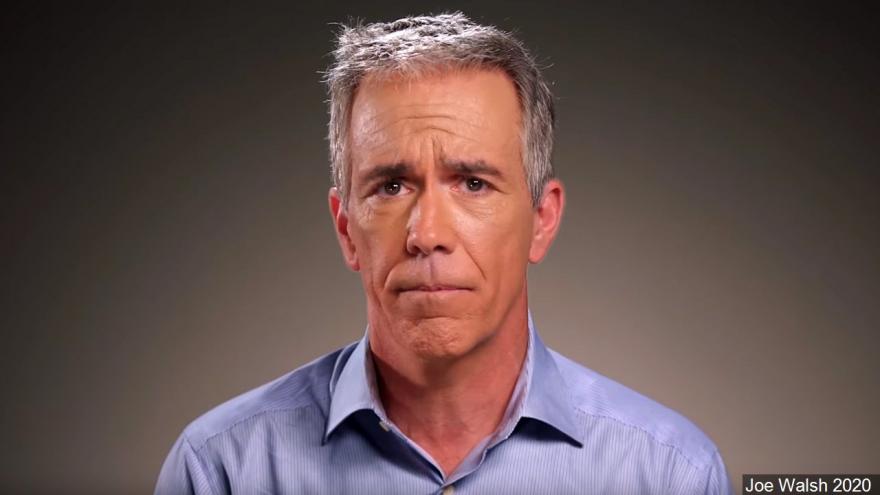 (CNN) -- Former US Rep. Joe Walsh is ending his uphill challenge against Donald Trump for the 2020 Republican presidential nomination, after suffering a crushing loss in the Iowa GOP caucuses in which he received only 1% of the vote.

"I am ending my candidacy for president of the United States," Walsh told CNN's John Berman on "New Day." "I got into this because I thought it was really important that there was a Republican -- a Republican -- out there every day calling out this president for how unfit he is."

"It's not a party. It's a cult. He can't be beat in the Republican primary so there's no reason for me, or any candidate, really to be in there," Walsh continued.

Walsh finished third in the Iowa Republican caucuses, which Trump overwhelmingly won on Monday as his impeachment trial was nearing its end.

A one-term congressman, Walsh launched his 2020 bid in August with slim to no chance of defeating Trump, who has high approval ratings among Republicans.

He was also up against the fundraising arm of Trump's reelection campaign and the Republican National Committee, which have raised millions. And several GOP state party leaders canceled their presidential primaries and caucuses, effectively cutting out Walsh's opportunities to challenge Trump.

His candidacy, however, attracted conservative lawyer George Conway, the husband to the President's counselor Kellyanne Conway. Conway donated to Walsh's campaign and had informally advised his campaign.

Walsh has a history of controversial comments as a conservative radio host and in Congress, but after announcing his candidacy said he regretted his false claims against former President Barack Obama.

Walsh, who voted for Trump in the 2016 election, also apologized for what he said was his role in helping elect an "unfit con man" to the White House.

Following his loss in the Iowa caucuses, Walsh on Twitter Tuesday likened the Republican Party to a "cult" and said he realized that "nobody can beat Trump in a Republican primary."

He previously told ABC News he would not vote for Trump if he locks up the Republican nomination, which Trump will all but certainly do.

Former Massachusetts Gov. Bill Weld remains the only Republican candidate facing off against Trump for the nomination.