John Lewis' great-nephew: My uncle was 'my hero' and 'it's up to us to keep his legacy alive' 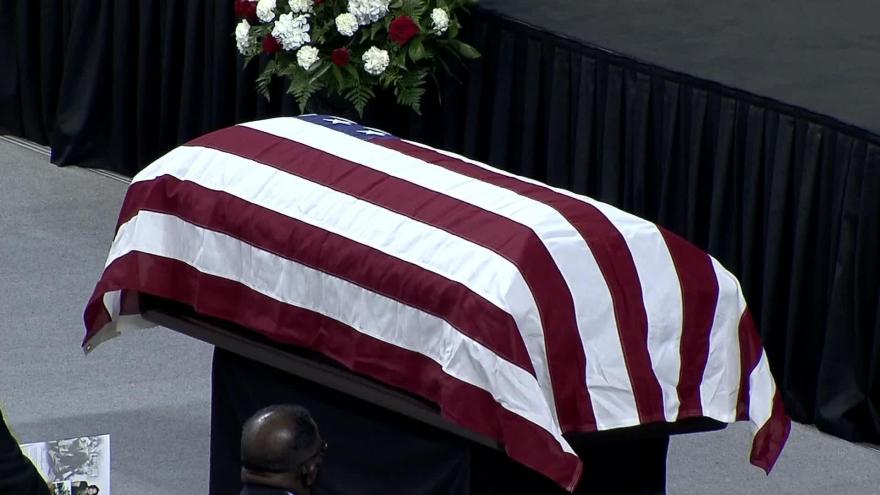 The late US Rep. John Lewis was remembered on Saturday as a humble family man by his siblings and a hero by his great-nephew at a hometown service in Troy, Alabama.

(CNN) -- The late US Rep. John Lewis was remembered on Saturday as a humble family man by his siblings and a hero by his great-nephew at a hometown service in Troy, Alabama.

"Congressman John Lewis was my uncle and my hero. And it's up to us to keep his legacy alive," Jaxson Lewis Brewster, John Lewis' young great-nephew, said in a short statement during Saturday's memorial service at Troy University.

After he spoke, the 7-year-old hopped off the stage, prompting laughter from the crowd -- a brief moment of levity in an otherwise solemn ceremony.

While the world knew John Robert Lewis, a civil rights icon and longtime US Democratic congressman, as John, to his family, he was known as Robert. In celebrating the life of "The Boy from Troy," five of Lewis' siblings spoke of a man of faith who wanted to help others, who never forgot his roots, and who made time for family despite his busy schedule and enormous responsibilities.

"He was no John. He was just Robert. And I loved him," Freddie Lewis, the congressman's brother, said during Saturday's memorial.

Henry "Grant" Lewis told the crowd of mourners that he initially planned to speak about his brother's "long" list of accolades. "Then I said to myself, they knew about all of that. I need to tell them some things about John that they might not know," he said.

"The John Lewis that I knew, the John Lewis that I want you to know about, is the John Lewis that would gravitate towards the least of us, would drop by his 4-year-old nephew's birthday party, feed the hungry and homeless on Thanksgiving Day, took the time to go by a young man's house in Troy that had portrayed a young John Lewis in his Black history class, asking his young brothers to be part of his special guest list while receiving the Medal of Freedom from President Barack Obama, making a surprise visit to his great-nephew's fifth-grade class."

"To sum up the life of John Lewis, I would say he worked a lifetime to help others and made the world a better place in which to live," Henry "Grant" Lewis said.

Henry "Grant" Lewis said his brother was "always concerned about the health and wellbeing of his family, and members of others."

He shared that he spoke with John the day before his brother died, and he recalled their last conversation.

"He would always ask me, 'How's everybody doing?' no matter how bad he felt. So we exchanged the love we had for each other Thursday night. And his last word was, 'How's the family doing? How's everybody doing?' And I said, 'They're doing fine.' He said, 'Will you make sure to tell them that I asked about them?'" Henry "Grant" Lewis said.

Rosa Mae Tyner spoke of her brother's "deep faith in God" and his "never ending desire to help others."

Ethel Mae Tyner said when she considers all her brother's accomplishments, she thinks of his humble beginnings and how he was always respectful to others.

The congressman's younger brother, Samuel Lewis, who was sometimes mistaken for John by their mother because they look so alike, said he remembers the day John left home.

Saturday's service is the start of a six-day memorial ceremony honoring John Lewis, with stops in five cities that played key roles in his life and legacy.