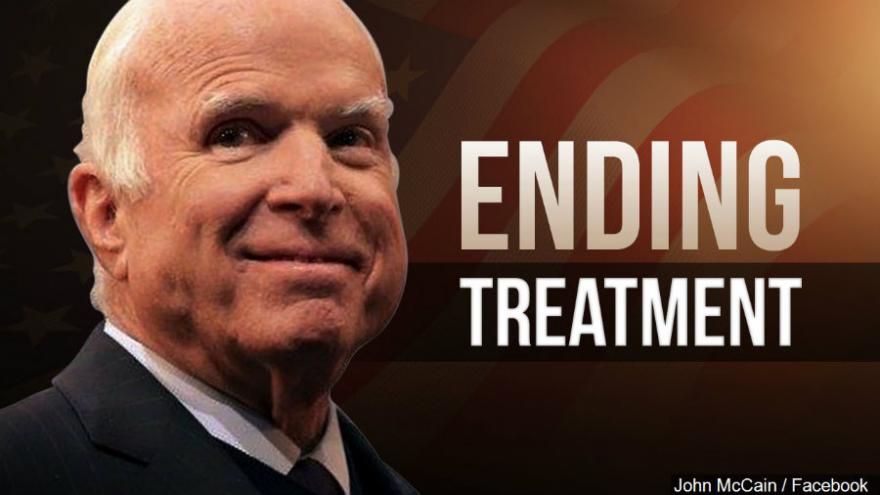 (CNN) -- Sen. John McCain has decided to stop treatment for the brain cancer he has been battling for over a year, his family said Friday in an announcement that precipitated a rare moment of bipartisan empathy in honor of the Vietnam war hero and Republican political veteran.

Colleagues of McCain, 81, had been bracing for the worst for months as the Arizona senator retreated from public life to fight the disease. But Friday's news left them shaken nonetheless. It effectively closes a tumultuous Washington career that included two unsuccessful presidential runs and saw McCain emerge as a singular political figure, an icon of the Senate and latterly as a vehement critic of President Donald Trump.

"Last summer, Senator John McCain shared with Americans the news our family already knew: he had been diagnosed with an aggressive glioblastoma, and the prognosis was serious. In the year since, John has surpassed expectations for his survival. But the progress of disease and the inexorable advance of age render their verdict. With his usual strength of will, he has now chosen to discontinue medical treatment," the McCain family said in a statement.

The statement went on to say: "Our family is immensely grateful for the support and kindness of all his caregivers over the last year, and for the continuing outpouring of concern and affection from John's many friends and associates, and the many thousands of people who are keeping him in their prayers. God bless and thank you all."

Cindy McCain, the senator's wife, wrote in a tweet, "I love my husband with all of my heart. God bless everyone who has cared for my husband along this journey." The senator's daughter, Meghan McCain, said in a tweet, "My family is deeply appreciative of all the love and generosity you have shown us during this past year. Thank you for all your continued support and prayers. We could not have made it this far without you - you've given us strength to carry on."

Sen. Lindsey Graham, a South Carolina Republican who's one of McCain's closest friends, said on Twitter that Cindy McCain "remains steadfast and is traveling every step of the way on this difficult journey," and the "love provided by Meghan and the McCain children to their father has been comforting to witness."

Sarah Palin, the former Alaska governor who McCain controversially chose as his vice presidential running mate in the 2008 election, offered a heartfelt tribute to a man who made her a major player in GOP politics for a period at the end of the last decade.

"Prayers for @SenJohnMcCain and his family at this most trying time," Palin wrote in a tweet. "May my friend sense appreciation for his inspiration to serve something greater than self."

McCain has not been in Washington since December, leaving a vacuum in the corridors of the Senate and the television news studios he roamed for decades. In recent weeks, he was not completely quiet, however.

In May, he called on his fellow senators to oppose Trump's nominee to lead the CIA, Gina Haspel, citing her role in the Bush-era CIA interrogation program. His opposition to Haspel's nomination was overshadowed by leaks from the White House that then-Trump aide Kelly Sadler had responded by saying at a meeting, reportedly as a joke, that "he's dying anyway."

McCain also frequently and directly criticized the commander in chief himself.

In July, he excoriated Trump for his cozy summit with Russian President Vladimir Putin, blasting the encounter as "one of the most disgraceful performances by an American president in memory."

"The damage inflicted by President Trump's naiveté, egotism, false equivalence, and sympathy for autocrats is difficult to calculate. But it is clear that the summit in Helsinki was a tragic mistake," he said in a statement.

In his final months in the Senate, McCain styled himself almost as the conscience of Congress, demanding his colleagues stand up and act as a check on the Trump presidency.

In what looks like his final legislative triumph, Trump signed into law the John S. McCain National Defense Authorization Act earlier this month. But in a fresh sign of hostility, Trump, who once said he didn't consider McCain a war hero because he was captured, didn't even mention the Arizona senator's name.

McCain has spent the last few months accepting visits and phone calls from political friends at home in Arizona. In his new memoir, "The Restless Wave," he said he had received calls since his diagnosis from old sparring partners, including the two men who ended his White House dreams in 2000 and 2008: former presidents George W. Bush and Barack Obama.

In the book, written in deepening recognition of his own mortality and at a polarized political moment, McCain wrote: "Before I leave, I'd like to see our politics begin to return to the purposes and practices that distinguish our history from the history of other nations.

"I would like to see us recover our sense that we are more alike than different."

Speaking to CNN's Jake Tapper on "State of the Union" last September, shortly after he went public with his prognosis, McCain said he was "very happy" with his life and what he has "been able to do."

"I am able to celebrate a wonderful life and I will be grateful for additional time that I have," the senator said at the time.