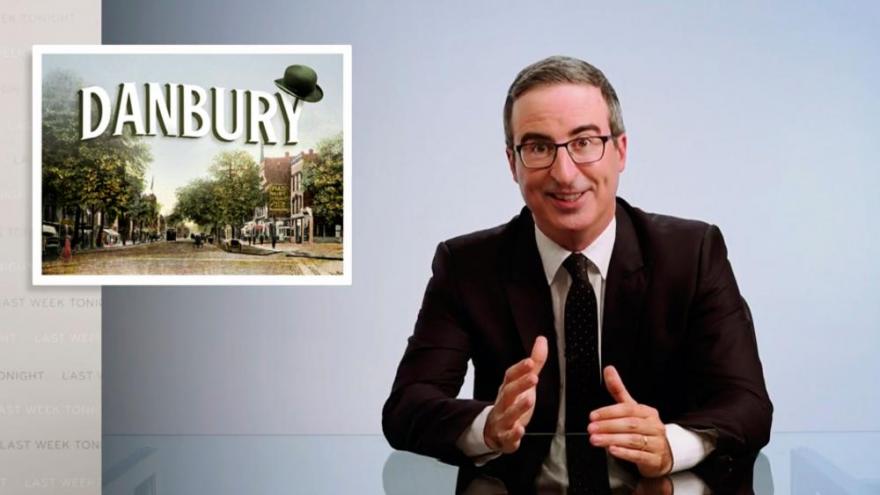 (CNN) -- It's official, a sewage plant in Danbury, Connecticut will be named after John Oliver after the comedian got into a tiff with the town's mayor.

The Danbury Wastewater Treatment Plant is now officially the John Oliver Memorial Sewer Plant after residents weighed in with their support and the town's city council voted 18-1 Thursday in favor of the change.

It may not seem like a landmark you want your name on, but Oliver was instrumental in making it happen.

The host of HBO's "Last Week Tonight with John Oliver" went after Danbury on his August 16 show during a segment on racial disparities on juries. In Oliver's anti-Danbury rant , the host noted that he only knew three things about the Connecticut town: "USA Today ranked it the second-best city to live in in 2015, it was once the center of the American hat industry and if you're from there, you have a standing invite to come get a thrashing from John Oliver, children included, (expletive) you," Oliver said.

Boughton responded by threatening to name the town's sewage plant after Oliver in a Facebook video on August 22.

"Behind me you see the city of Danbury Sewer Plant, and we're going to rename it the John Oliver Memorial Sewer Plant. Why?" Boughton asked. "Because it's full of (expletive) just like you, John."

The talk show host did not back down -- he upped the stakes.

Oliver offered to donate $55,000 to local charities if the mayor followed through on his offer, and the city accepted.

On September 6, Boughton commented back in a video that, "A deal is a deal."

It's unclear why Danbury was singled out, but the city is not complaining.

"I never have seen such passion from something in the community...this takes the cake. I'm still getting emails!" Boughton said in his weekly video update before the vote.

In addition, the play spat has become a surprising means of raising money for charity, Boughton said during the city council meeting.

In addition to Oliver's donation, local organizations committed to raising nearly $100,000 more for the area's United Way food pantry, according to the mayor's office. Boughton is even selling tours of the facility in order to raise money for United Way.

The mayor requested Oliver attend a ribbon-cutting ceremony for the newly named sewage plant. HBO, which like CNN is owned by WarnerMedia, did not immediately respond to CNN's requests for comment on Oliver's behalf.