'Joker' spurs security precautions from the US Army and police 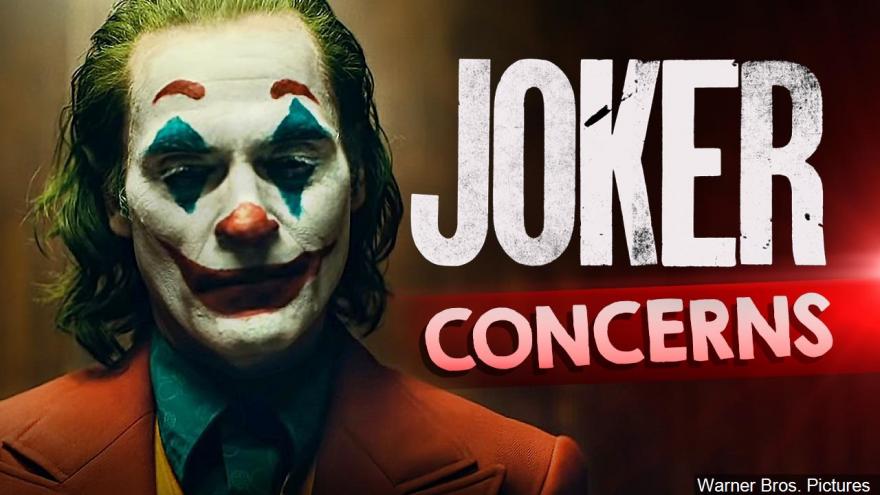 (CNN) -- Both the US Army and the Los Angeles Police Department will be on alert -- and one theater chain has banned all costumes -- during the screening of "Joker."

The movie hits theaters next week -- and it's the follow-up to 2012's "The Dark Knight Rises," which saw a mass shooting in Colorado during a midnight showing.

The Los Angeles Police Department has announced that officers will have "high visibility" at theaters during premiere screenings of "Joker."

The US Army, meanwhile, confirmed it had sent out a memo obtained by CNN to commanders in Fort Sill, Oklahoma, about a potential violent threat discovered in discussion on the dark web about the possible targeting of a theater during the movie's release.

The Fort Sill Criminal Investigation Command office "did so out of an abundance of caution to help keep our soldiers and their families safe," said Chris Grey, a spokesperson for USA CID.

"At this point, we are not aware of any information indicating a specific, credible threat to a particular location or venue," he said.

The dark theme of the $55 million film, about the rise of Batman's bad clown nemesis, has invoked memories of a mass shooting in which 12 people were killed and 70 injured at a midnight screening of "The Dark Knight Rises" in Aurora, Colorado, in 2012.

The LAPD said in a statement to CNN that it is aware of the public concerns surrounding the premiere of the "Joker."

"While there are no credible threats in the Los Angeles area, the Department will maintain high visibility around movie theaters when it opens," the LAPD said. "We encourage everyone to go out and enjoy all of the weekend leisure activities the City has to offer. However, Angelenos should remain vigilant and always be aware of your surroundings. As always, if you see something, say something."

Meanwhile, Landmark Theatres, which owns 52 theaters in 27 markets, has extended its ban on masks and toy weapons to include all costumes during "Joker's" theatrical run. The company declined to comment on its operating procedures but the policy mentions the film specifically.

"We want all our guests to enjoy the 'Joker' for the cinematic achievement that it is. But no masks, painted faces or costumes will be permitted into our theatres," the company said in a statement included at the bottom of the page for advance ticket purchases on the website for Landmark.

Warner Bros. asked to take a stance on gun violence

Earlier this week, some family members and friends of loved ones who witnessed or were killed in the Aurora shooting called on Warner Bros., the film's distributor, to help combat gun violence.

In a letter addressed to Warner Bros. CEO Ann Sarnoff and obtained by CNN, five family members and friends of victims of the theater shooting asked the studio to "use your massive platform and influence to join us in our fight to build safer communities with fewer guns." (Warner Bros., like CNN, is owned by WarnerMedia.)

"Over the last several weeks, large American employers from Walmart to CVS have announced that they are going to lean into gun safety. We are calling on you to be a part of the growing chorus of corporate leaders who understand that they have a social responsibility to keep us all safe," the letter states.

The letter asked execs to end political contributions to candidates who take money from the NRA and vote against gun reform, actively lobby for gun reform and make contributions to groups that support survivors and aim to reduce gun violence.

In a statement, Warner Bros. studio acknowledged that gun violence is "a critical issue."

"Gun violence in our society is a critical issue, and we extend our deepest sympathy to all victims and families impacted by these tragedies," the statement reads. "Our company has a long history of donating to victims of violence, including Aurora, and in recent weeks, our parent company joined other business leaders to call on policymakers to enact bi-partisan legislation to address this epidemic."

"At the same time, Warner Bros. believes that one of the functions of storytelling is to provoke difficult conversations around complex issues. Make no mistake: neither the fictional character Joker, nor the film, is an endorsement of real-world violence of any kind. It is not the intention of the film, the filmmakers or the studio to hold this character up as a hero."