Jon Gruden has resigned as head coach of the Las Vegas Raiders after reports of homophobic, racist and misogynistic emails 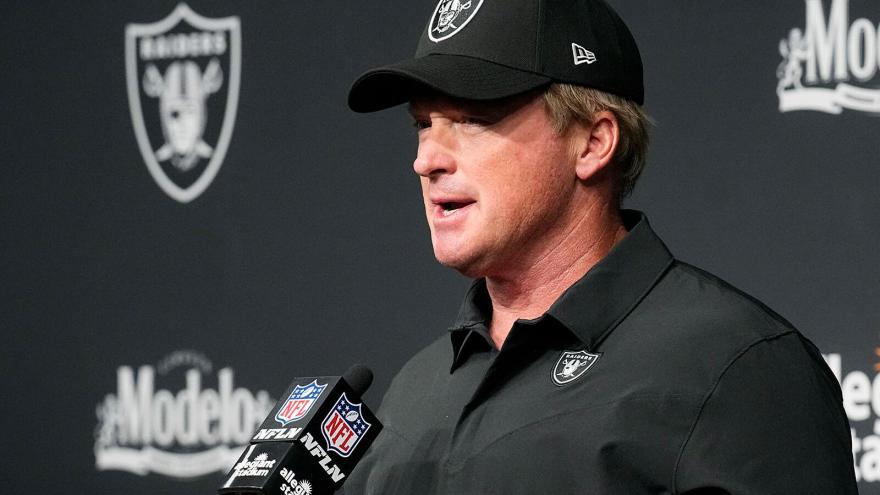 Las Vegas Raiders head coach Jon Gruden, while an ESPN analyst, sent emails that included language that was homophobic or misogynistic, according to a New York Times report on Monday.

(CNN) -- Jon Gruden resigned Monday as head coach of the Las Vegas Raiders after reports emerged of him using homophobic, racist and misogynistic language in emails while he worked as an ESPN analyst.

"I love the Raiders and do not want to be a distraction. Thank you to all the players, coaches, staff, and fans of Raider Nation. I'm sorry, I never meant to hurt anyone," he said in a statement issued by the Raiders.

Critics had called for Gruden, who has coached the Raiders since the beginning of the 2018 season, to be fired since The Wall Street Journal reported he used racially insensitive language to describe NFL Players Association executive director DeMaurice Smith in a 2011 email.

On Monday, the New York Times reported it reviewed more emails and found Gruden denounced women being employed as on-field officials, a team drafting an openly gay player, and the tolerance for national anthem protesters.

A league source confirmed the accuracy of the Times' story to CNN.

The emails were uncovered by the league and presented to NFL commissioner Roger Goodell last week, the source said. The league said on Friday that it sent the emails to the Raiders and that it has been waiting for the team to review them with Gruden.

On Friday, league spokesman Brian McCarthy said: "The email from Jon Gruden denigrating DeMaurice Smith is appalling, abhorrent and wholly contrary to the NFL's values. We condemn the statement and regret any harm that its publication may inflict on Mr. Smith or anyone else."

CNN has reached out again to Gruden, to the NFL and to the Raiders for comment.

Gruden is one of the NFL's highest-paid coaches, having signed a 10-year, $100 million contract with the Raiders, according to salary tracking website Spotrac. He first coached the Raiders from 1998 to 2001, then won a Super Bowl with the Tampa Bay Buccaneers in 2002. At the time, Gruden was 39 and then the youngest coach to win the Super Bowl.

He left the Bucs in 2008 and became a football analyst for ESPN.

Gruden's messages were sent while he was working for ESPN as a color analyst during "Monday Night Football," the Times reported.

In one he called NFL Commissioner Roger Goodell a "p*ssy" and a "f*ggot," according to the Times. In another he called Michael Sam a "queer" after the player was drafted by the St. Louis Rams and Gruden said the league should not have pressured the team's then coach to draft Sam, the Times reported.

The Times said the emails covered a seven-year period and many were sent to Bruce Allen, the former president of the Washington Football Team. Allen was fired by the organization in December 2019.

On Friday an NFL spokesperson the email reported in the Wall Street Journal was unearthed as part of an NFL review of workplace misconduct at the Washington Football Team that took place this summer.

In response to the Wall Street Journal report, Gruden said, "All I can say is that I'm not a racist."

He added: "I can't tell you how sick I am. I apologize again to De Smith, but I feel good about who I am and what I've done my entire life. I apologize for the insensitive remarks. I had no racial intentions with those remarks at all."