Journalist partially blinded while covering protests: There's no way they could have mistaken me for anything but press 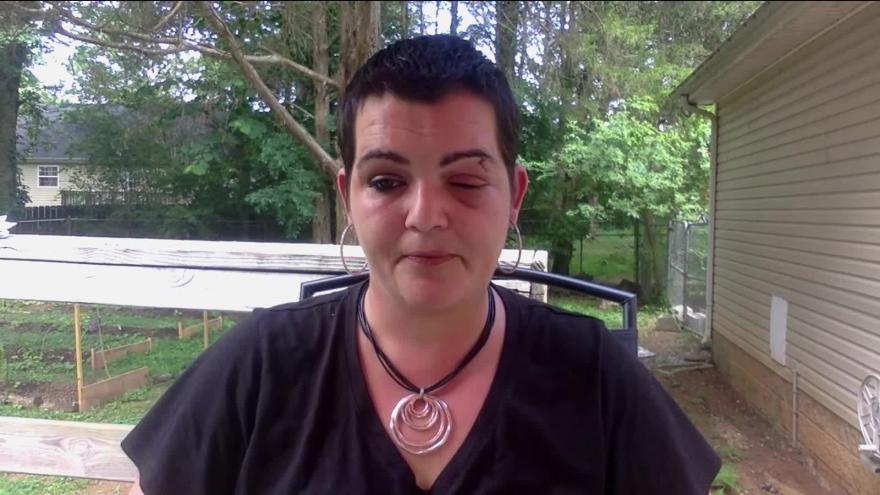 (CNN) -- The final photos journalist Linda Tirado took around midnight on May 30, while covering the protests in Minneapolis, show what appears to be a police officer aiming a foam bullet gun right at her.

Shortly after, Tirado was hit in the face with a foam bullet, which broke the goggles she was wearing and left her permanently blind in one eye.

"There were protesters behind me, police in front of me, but you can see from the clarity of the photo that there wasn't gas around us," Tirado, a freelance journalist and author, told CNN's Brian Stelter on "Reliable Sources" Sunday.

"There's no way that they could have mistaken me — with a professional camera — for anything but working press," she said.

Now Tirado is suing the City of Minneapolis, its police chief and others over her injury.

Tirado is just one of hundreds of journalists who have been assaulted, arrested or harassed while covering the nationwide demonstrations over the death of George Floyd at the hands of police. Like in Tirado's case, many such attacks have been carried out by law enforcement, according to the US Press Freedom Tracker, a nonprofit organization thattracks incidents of violence against journalists covering the protests.

The Press Freedom Tracker has verified more than 400 such incidents across 60 cities.

Reporters have largely said they want attention to be focused on the communities they cover, not on their own safety concerns. Still, the incidents have provoked concern from a range of advocacy groups.

Tai-Heng Cheng, an attorney with Sidley Austin who took on Tirado's case pro bono, said the case will have important implications not just for Tirado but alsofor all journalists working to deliver reports to the American publicfrom the ground amid the demonstrations.

"The US Constitution is clear: you simply do not shoot journalists covering civil protests. It is fundamentally un-American," Cheng said. "And we brought this lawsuit for Linda because it's really important, we think, to establish that principle."

Tirado pointed out that freelance journalists, which havelikely grown in number as permanent newsroom jobs disappear, take on additional risks when covering protests because they don't have the protections such as health care from an employer.

"As a freelancer without the protections of a press desk and the attorneys that would come with a network or a news masthead — freelancers are certainly left to themselves," Tirado said. "I'm definitely going to be looking at surgery bills for at least the next few months. I just got the first bills rolling in, and they're pretty big, so we'll see how this goes."

She said she is now grappling with what the future of her work will be likeafter recovering from her injury, but she is certain she will continue working.

"I think the nature of my work is going to have to substantially change, given that I am a frontline journalist, and it's a question of how I'm going to heal up and whether I'll be able to safely go on location," Tirado said. "But, yes, I am still going to keep working. There's absolutely no way this stops me."