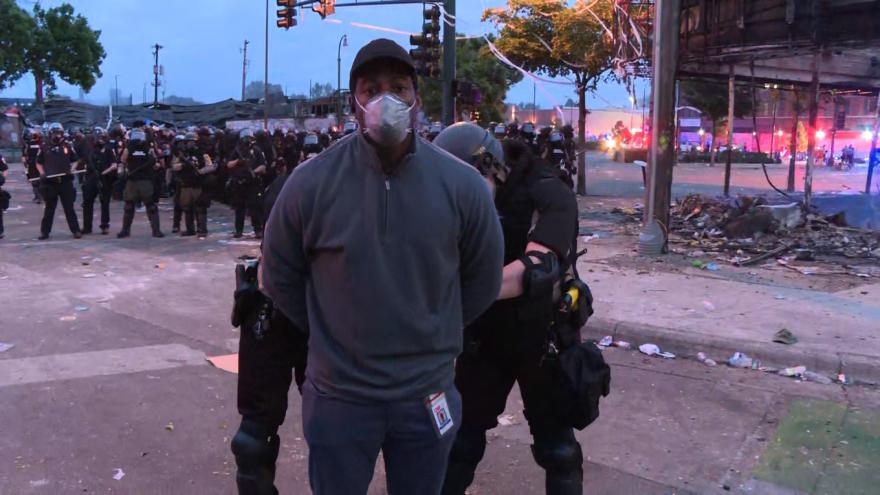 At least a half dozen different incidents were reported on Friday, starting with the wrongful arrest of a CNN crew in Minneapolis and ending with the arrest of two photographers in Las Vegas.

Another disturbing episode took place on Saturday, when Ian Smith, a photojournalist for KDKA TV in Pittsburgh, said he was "attacked" by protesters downtown. "They stomped and kicked me," he wrote in a tweet from the back of an ambulance. "I'm bruised and bloody but alive. My camera was destroyed. Another group of protesters pulled me out and saved my life. Thank you!"

Reporters by and large said they wanted the attention to be focused on the communities they cover, not on their own safety concerns. Still, the incidents provoked concern from a range of advocacy groups.

In Louisville, Kentucky, where protesters have been calling for accountability for a black woman who was fatally shot by police in March, an officer fired what appeared to be pepper balls at a reporter for WAVE 3 News, a local TV station. The incident was broadcast live on the air. "Who are they aiming that at?" the anchor asked. "At us," the reporter replied.

The reporter, Kaitlin Rust, and her cameraman were "courageously and lawfully" covering the news when they were targeted, the station said in a statement. "There is simply no justification for the Louisville police to wantonly open fire, even with pepper balls, on any journalists under any circumstances."

Louisville Metro Police Special Advisor Jessie Halladay issued an apology to Rust. Halladay said she had reviewed the video and said the incident was not something that should have occurred if Rust was singled out as a reporter.

Reporters for another Louisville TV station, WLKY, were targeted by protesters on Friday night. A WLKY news vehicle was destroyed and a videojournalist "was attacked so badly he had to go to the ER," anchor Julie Dolan said on Twitter.

Many TV networks are dispatching private security guards to support journalists who are in the field at protests.

"These situations could have been much worse had it not been for security," Dolan said.

Security guards were involved when a Fox News crew was harassed and chased out of Lafayette Park, one block from the White House, on Friday night. Videos of the incident showed protesters cursing at Fox and criticizing right-wing media.

Correspondent Leland Vittert, cameraman Christian Galdabini and two security guards left the park as the crowd grew more and more hostile. According to Fox, "Vittert and the crew were punched and hit with projectiles as they fled, and a Fox News camera was broken when a member of the mob tried to grab it."

Journalists from rival outlets supported the Fox crew and condemned the violence. CNN anchor Jake Tapper called it an "unacceptable assault on freedom of the press."

CBS correspondent Ed O'Keefe wrote on Twitter, "Whether it's police officers or everyday Americans — keep your hands, weapons and handcuffs off of *any* journalist exercising their First Amendment right to report the news. Period."

Fox News Media CEO Suzanne Scott said in a Saturday memo, obtained by CNN Business, that the company is taking "all necessary security precautions to safeguard all of our journalists and reporting crews."

Journalists in several cities said they were exposed to tear gas and other materials used to disperse crowds.

In Minneapolis, photographer and author Linda Tirado said on Twitter that she was blinded in her left eye. What "we think happened is I took a rubber bullet to the face," she wrote. "It exploded my eyeball, which has now been patched back together but who knows if it'll need more surgery. My vision is gone no matter what it winds up looking like scar wise."

In Denver, a crew from KMGH TV reported being hit with paintballs and tear gas.

In Phoenix, reporter Briana Whitney was accosted by a protester while she was live on the air.

"I was intentionally tackled by this man while I was on air trying to report what was happening during the protest at Phoenix PD headquarters," she said at the end of the night. "I feel violated, and this was terrifying."

In Las Vegas, two photojournalists on assignment to cover protests were taken into police custody on Friday night.

Photographer Bridget Bennett told CNN Business that she was detained along with another photojournalist at the protest location. "I'm a freelance photojournalist and was working on assignment for AFP. I was released this morning," Bennett said. She declined further comment.

Ellen Schmidt, a staff photojournalist at the Las Vegas Review-Journal, was also arrested.

Review-Journal executive editor Glenn Cook said in an email message, "it is appalling that Las Vegas police officers, who have nothing to do with what happened in Minnesota, would so forcefully take into custody two people who were obviously working photojournalists and posed no threat to law enforcement or public safety. They never should have been touched, let alone arrested and then booked into jail."

On Saturday morning, the recovery efforts began. At CNN Center, the network's flagship building in Atlanta, protesters' graffiti on the CNN logo was removed. An internal memo reassured staffers that everyone at the building was safe.

UN secretary general António Guterres was moved to post a message defending the rights of the press.

"When journalists are attacked, societies are attacked," he tweeted Saturday morning. "No democracy can function without press freedom nor can any society be fair without journalists who investigate wrongdoing and speak truth to power."