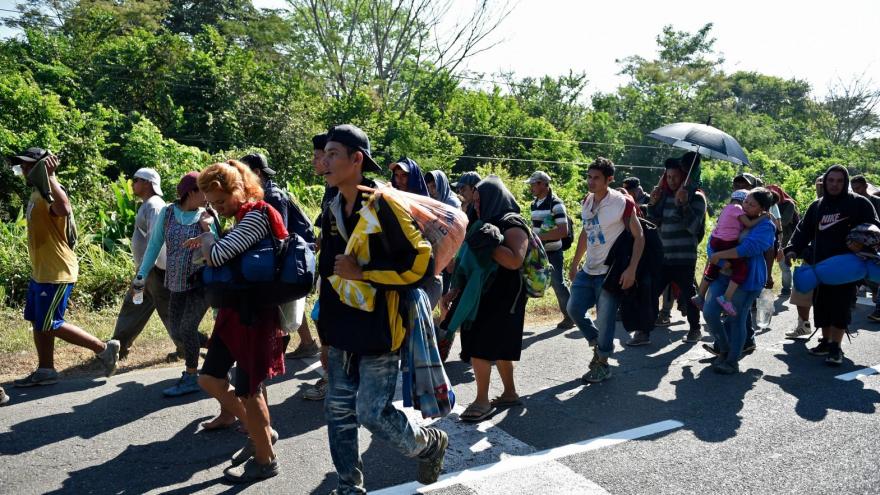 (CNN) -- A federal judge blocked a Trump administration rule that dramatically limits the ability of Central American migrants to claim asylum in the US.

The rule at the core of the lawsuit prohibits migrants who have resided in or traveled through third countries from seeking asylum in the US, therefore barring people traveling through Mexico from being able to claim asylum.

It's the second time a lower court has concluded the rule is unlawful.

Judge Timothy Kelly, a Trump appointee at the US District Court for the District of Columbia, said that plaintiffs will expend more resources and face more difficulties in representing clients for which the rule applies.

The Trump administration argued the regulation was necessary to curb asylum claims at the border, but Kelly noted that new coronavirus restrictions on the border largely bar migrants from entering the US, so the court action will not lead to "disruptive consequences."

"Indeed, that recent pandemic-related administrative action appears to have effectively closed the southern border indefinitely to aliens seeking asylum only underscores that vacatur of the Rule will not result in prohibitively disruptive consequences," Kelly writes.

On Wednesday afternoon, asylum officers at US Citizenship and Immigration Services, the federal agency responsible for the US legal immigration system, were told that "effective immediately" the third country transit ban no longer applied, according to a source familiar with the guidance.

Officers were instructed to revert to processes in effect before the ban was implemented in July 2019. The transit bar to asylum "shall no longer apply to any alien," according to the source.

Hardy Vieux of Human Rights First applauded the ruling, saying in a statement: "Judge Kelly's ruling is proof that the administration cannot do an end run around the law. In the United States of America, we follow the rule of law, even when it benefits asylum-seekers demonized by this administration."

Last year, a California federal judge's attempt to issue a nationwide injunction on the asylum restrictions was blocked, in part, by the 9th US Circuit Court of Appeals. Amid the back and forth, the Justice Department had asked the Supreme Court to step in. The Supreme Court allowed the rule to go into effect while the appeals process played out.

This story has been updated with additional reporting on the effects of the decision.