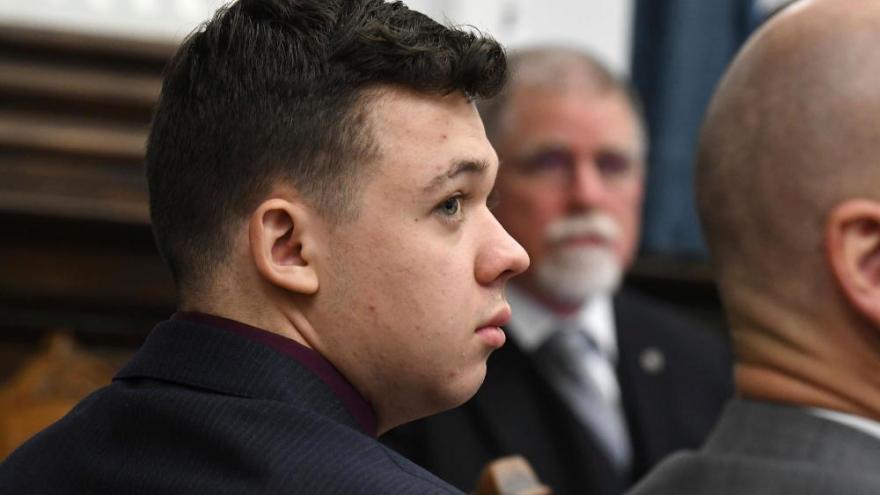 Dr. John Black testifies as Kyle Rittenhouse watches during his trial at the Kenosha County Courthouse on Thursday, November 11, 2021.

(CNN) -- Judge Bruce Schroeder dismissed a misdemeanor weapons charge against Kyle Rittenhouse on Monday prior to the start of closing arguments in his homicide trial.

The charge, possession of a dangerous weapon by a person under 18, was punishable by up to nine months in prison and a $10,000 fine. Rittenhouse now faces five felony charges and, if convicted on the most serious charge, could face a mandatory sentence of life in prison.

Judge Schroeder also told jurors they will be allowed to consider lesser included offenses for two of the five counts. Jurors were instructed to first consider the original offense, and only if they find Rittenhouse is not guilty beyond a reasonable doubt, then they would move on to consider corresponding lesser offenses. Many of the lesser offenses still carry significant penalties.

The instructions to the jury Monday stretched for over an hour. Judge Schroeder stopped midway through to discuss them with the attorneys further and noted how convoluted the instructions are.

"They are certainly correct in what they say, I just think they are not clear," he said.

Closing arguments are set to come afterward and last up to five hours. The jury of eight men and 10 women will also be narrowed to 12 people by a drawing of names before deliberations begin.

The court hearing comes at the end of a two-week trial highlighted by emotional and illuminating testimony from Rittenhouse himself, who said he acted in self-defense when he fatally shot two people and wounded another on the night of August 25, 2020, in Kenosha, Wisconsin. The prosecution, meanwhile, has said Rittenhouse, 17 at the time, acted recklessly and provoked others when he brought an AR-15-style into the city during the chaotic aftermath of the police shooting of Jacob Blake.

The trial featured more than a dozen videos from the night, showing what happened before, during and after the shootings. Most of the facts of what happened that night were not up for debate -- rather, the heart of the trial was the analysis of Rittenhouse's actions and whether they can be considered "reasonable."

The prosecution rested its case last Tuesday and the defense rested Friday.

Rittenhouse took the stand in his own defense last week, providing emotional testimony in which he said he acted in self-defense when he fatally shot Joseph Rosenbaum, who had thrown a plastic bag at him and chased him. A crowd of people pursued him and Rittenhouse then fatally shot Anthony Huber, who had hit him with a skateboard, and Gaige Grosskreutz, who was armed with a pistol.

Rosenbaum and Huber were killed, and Grosskreutz was wounded.

The dismissal of the misdemeanor charge was part of a debate over jury instructions and lesser offenses on Monday.

He is also charged with first-degree intentional homicide while using a dangerous weapon for the killing of Huber. It is the most severe charge Rittenhouse faces and the only charge that carries a mandatory sentence of life in prison.

Judge Schroeder gave jurors instructions on Monday for the lesser included offenses of second-degree intentional homicide and first-degree reckless homicide for Huber's death. Both lesser offenses are punishable by up to 60 years in prison.

For shooting Grosskreutz, Rittenhouse is charged with attempted first-degree intentional homicide while using a dangerous weapon. The charge is punishable by up to 60 years in prison.

In a conference Friday about jury instructions, the judge told Rittenhouse presenting lesser offenses to the jury lowers the possibility of a second trial but increases the risk of a conviction. Schroeder explained if the prosecution is not able to establish Rittenhouse's guilt on the charged offense beyond a reasonable doubt, then the jury must acquit him.

Prosecutors requested the jury be given instruction on provocation, after arguing Rittenhouse provoked Joseph Rosenbaum by raising his gun and pointing it at somebody, which led to Rosenbaum to run after him. The judge agreed to allow the panel to consider whether Rittenhouse provoked Rosenbaum into attacking him -- thus negating self-defense.

Ellie Honig, a CNN senior legal analyst and a former prosecutor, said the provocation instruction was an important win for the prosecution. Honig said the instruction allows prosecutors to argue "the defendant went too far, used deadly force when it wasn't reasonably necessary" and he "provoked the attack, and hence cannot argue self-defense."

How testimony played out

In his testimony, Rittenhouse indicated he knew Rosenbaum was unarmed when the man ran toward him and admitted he pointed the gun at Rosenbaum to deter him. Rittenhouse noted he was aware pointing a rifle at someone is dangerous.

"He was chasing me, I was alone, he threatened to kill me earlier that night. I didn't want to have to shoot him," Rittenhouse testified. "I pointed it at him because he kept running at me, and I didn't want him to chase me."

Rittenhouse said he feared Rosenbaum -- who did not touch him -- would take his gun and kill people.

A series of witnesses testified Rosenbaum had acted erratically that night and earlier threatened Rittenhouse.

Rittenhouse testified he fled the scene after shooting Rosenbaum and tried to reach police to turn himself in. A crowd of people pursued him, yelling that he had shot someone, and several people confronted him when he fell to the ground. Rittenhouse then twice at a man who tried to kick him, once at Huber and once at Grosskreutz.

Grosskreutz, a 27-year-old paramedic who was armed that night, said on the stand he viewed Rittenhouse as an active shooter and went to confront him. He was shot in the right bicep but survived -- the only one of the people shot that night who lived.

Grosskreutz acknowledged at one point in their standoff he pointed his pistol at Rittenhouse. But he said he never did so intentionally and did not fire at the teenager.

"I was never trying to kill the defendant," he said. "In that moment, I was trying to preserve my own life, but doing so while taking the life of another is not something I am capable or comfortable doing."

In addition, Grosskreutz acknowledged he incorrectly told police last year his firearm had fallen out of his pants that night and did not admit he had a weapon at the time. He also admitted his concealed carry license had expired and he had not renewed it.

Wisconsin Gov. Tony Evers has 500 National Guard troops on standby outside of Kenosha, ahead of a possible verdict.

Dramatic scenes -- like Rittenhouse crying on the stand and the judge admonishing the prosecution last week -- have already occurred inside the courtroom. Evers is now preparing for scenes outside the courtroom.

"The Kenosha community has been strong, resilient, and has come together through incredibly difficult times these past two years, and that healing is still ongoing," Evers said in a statement Friday. "I urge folks who are otherwise not from the area to please respect the community by reconsidering any plans to travel there and encourage those who might choose to assemble and exercise their First Amendment rights to do so safely and peacefully."