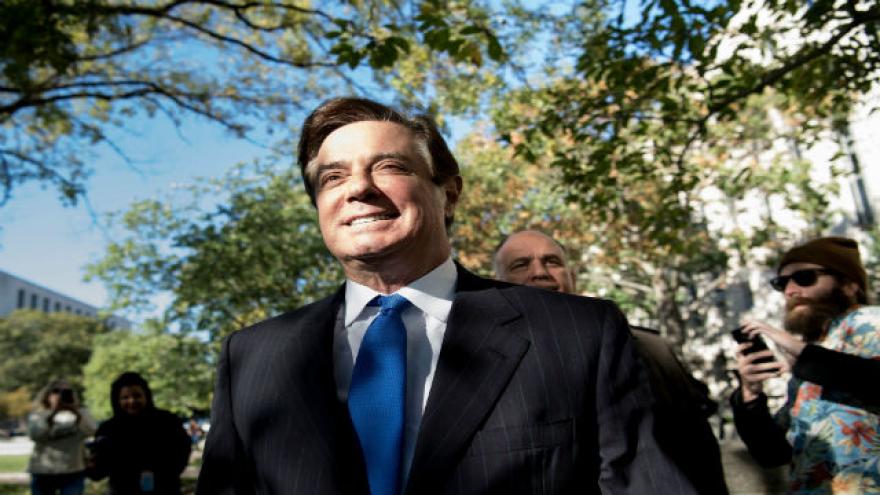 (CNN) -- A federal judge Thursday declined to immediately release Paul Manafort from house arrest, and separately put a gag order on attorneys involved in the case.

Judge Amy Berman Jackson said she would take up Manafort's request Monday. His lawyers Thursday argued in a court filing that the $10 million unsecured bond -- money Manafort would only pay if he disappeared or violated the court's orders -- should be enough of a restrictive measure until he goes to trial.

Since his arrest Monday, Manafort has not been allowed to leave his home in Alexandria, Virginia, except for medical and religious reasons and to meet with his attorney and appear in court.

"Given the substantial media coverage surrounding Mr. Manafort and this investigation, it is fair to say that he is one of the most recognizable people on the planet today. Query where such an individual could even hide?" Manafort's defense lawyers asked.

In the 30-minute hearing Thursday, Jackson said that Gates will be allowed to leave his house for children's sports events on Saturday morning and Sunday afternoon. He'll be under GPS monitoring throughout. Gates' attorney, Shanlon Wu, also said he hadn't yet turned over a passport and a passport card, and would do that today.

Jackson also placed a gag order on the attorneys involved in the case.

"This is a criminal trial. It is not a public relations campaign," she said, telling the lawyers to make no more statements from the courthouse steps. She said the attorneys could respond to her order for them to stop speaking publicly by November 7.

Manafort and Gates have pleaded not guilty.

Jackson said she hoped to set a trial date in the case for after March.

Federal prosecutors say that Manafort, 68, may flee the country because of his "history of deception," and the amount of foreign travel and his millions of dollars held in foreign bank accounts.

Among other things, prosecutors have noted that Manafort has three US passports with different numbers and traveled abroad recently while using a phone and email registered under an alias.

But Manafort's defense attorneys, Kevin Downing and Thomas Zehnle, say that "Mr. Manafort is not a danger to the community." They claim he has strong family ties in the US, including a wife of almost 40 years, two daughters and children, and his assets are mostly in the US.

The filing also notes that Manafort's work for Ukrainian political clients ended in 2014 -- two years before he began to work as a top adviser on the Trump presidential campaign.

"The weight of the evidence outlined against Mr. Manafort has also been embellished," Manafort's filing says.

"As a US citizen, Mr. Manafort only has US passports in his name. Although it might be surprising to some, it is perfectly permissible to have more than one US passport, as individuals who travel abroad extensively no doubt know," they wrote. Manafort's lawyers also dispute the federal prosecutors' suspicion of his bank accounts in Cyprus, saying that money came from "legal sources" and he now has either closed those accounts or keeps "nominal" amounts of money in them.

Manafort's filing Thursday also adds that he and his former lawyer learned from federal prosecutors in August that he'd face an indictment. He hadn't fled the country since then, and even traveled abroad between August and his October 30 arrest.

"Your position has changed two times since you stood up. I'm concerned, very concerned ... that bond isn't sufficient and bond without [GPS] monitoring isn't sufficient. If they leave and don't come back, we need to know where they went," she said Thursday.

Manafort rested his head on his hand throughout the hearing, with his back toward the filled rows of spectators. His wife Kathleen was in attendance in the front row.

In another filing Thursday morning, federal prosecutors asked for a restraining order so Manafort can't change a life insurance policy that he and his wife Kathleen hold through Northwestern Mutual Life Insurance Company. Federal prosecutors also asked for information about the value of the Manaforts' life insurance policies. The policy is part of what Manafort could forfeit to the government if convicted.

Gates hired two private attorneys to argue for him in court, now that he faces eight federal charges resulting from the Mueller investigation.

The attorneys are Walter Mack of New York City and Shan Wu of Washington.

Previously, Gates was represented by a different Washington-based lawyer, Michael Dry. But Dry didn't appear in court when Gates first went before a judge after he was arrested that morning. On Monday, a public defender, normally reserved for a less affluent defendant, spoke on his behalf.

Judge Amy Berman Jackson will continue to hear their case as it moves toward a trial.

Jackson earned Senate confirmation in 2011 after being appointed by former President Barack Obama. Among several notable cases, she sentenced former US Rep. Jesse Jackson Jr. to two and a half years in prison after he was convicted of corruption, and she gave his wife a one-year sentence.

In that case, Jackson was keen to point out the nature of crime and punishment, especially in cases against public officials.

"If I imposed a sentence that included no incarceration at all in this case, what message would that send? It would be read one way and one way only, as a clear statement that there are two systems of justice: one for the well-connected and one for everyone else," she said when sentencing the Jacksons. "I cannot do it. I will not do it."