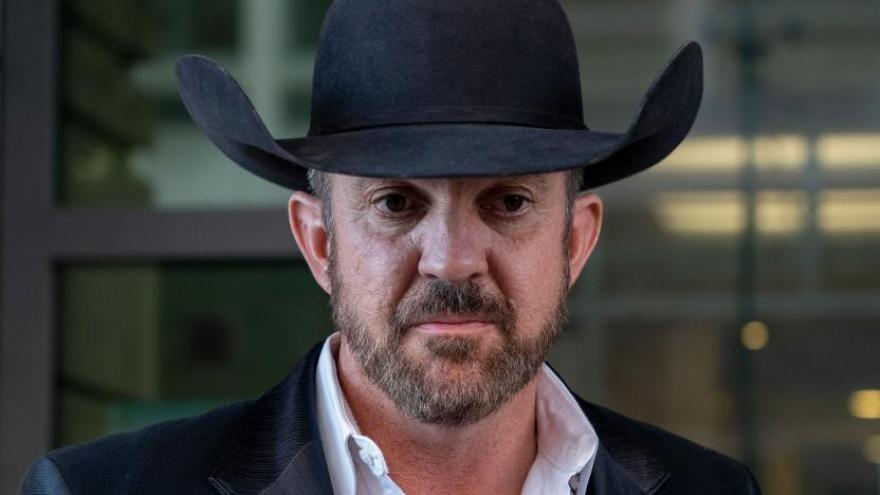 A federal judge found Couy Griffin, a founder of Cowboys for Trump and the second January 6 defendant to go on trial as part of the Justice Department's massive prosecution, guilty of trespassing on US Capitol grounds while Vice President Mike Pence was there.

(CNN) -- A federal judge on Tuesday found Couy Griffin, a founder of Cowboys for Trump and the second January 6 defendant to go on trial as part of the Justice Department's massive prosecution, guilty of trespassing on US Capitol grounds while Vice President Mike Pence was there.

Griffin, a conspiracy theorist who also serves as a county commissioner in New Mexico, was acquitted of a second misdemeanor charge of disorderly and disruptive conduct. Griffin argued that he led others in prayer at the Capitol that day.

Judge Trevor McFadden issued the ruling after a sometimes-contentious bench trial that began Monday and ended midday Tuesday. Griffin faces a potential fine, probation or jail time up to one year after being found guilty of entering and remaining in a restricted area.

After the verdict, Griffin told reporters outside the courthouse that he didn't want to go to jail but continued to peddle the false conspiracy theory that January 6 was a set-up by the US government.

The Justice Department has charged nearly 800 defendants in the attack on the Capitol, securing guilty pleas from almost one-third of that group, and Griffin's trial shows what January 6 defendants may contend with when taking their cases to trial, including extensive video and other evidence.

McFadden noted Griffin's comments in videos after the riot when he acknowledged the area he entered was restricted. McFadden also pointed out that Griffin likely saw the barriers outside the Capitol and signs marking restricted areas while recording a video in front of the Capitol on January 5.

Some defendants, including Griffin's legal team, have leaned into right-wing spin and conspiracies about January 6, including casting the deadly riot as a more benign gathering of tourists and protesters.

During Griffin's trial -- only the second time the Justice Department has had to prove a January 6 case beyond a reasonable doubt -- prosecutors addressed questions about how rioters would have known they couldn't enter the Capitol grounds and about Pence's precise whereabouts after he was evacuated from the Senate chamber. A Secret Service inspector testified that Pence was taken to a loading dock underneath the building.

Griffin now faces the same conviction as a number of Capitol riot defendants who pleaded guilty to a single charge of illegally entering restricted grounds.

But unlike those who pleaded guilty, Griffin could face a setback at sentencing: he may not see the benefit of having accepted responsibility for his actions after he was charged, a factor judges can take into consideration.

Sentencing for Griffin is set for June 17.