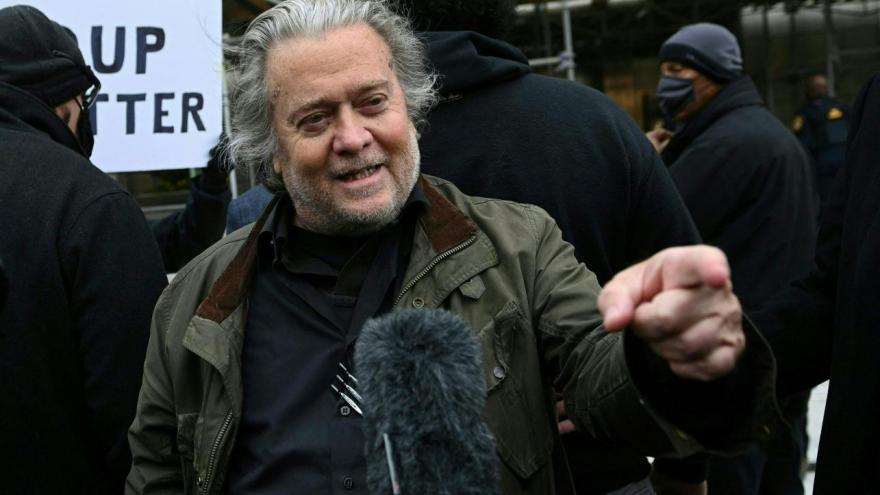 Court will hear arguments in the dispute between Steve Bannon and the Department of Justice ahead of his contempt of Congress trial. Bannon here arrives at the FBIs Washington office on November 15, 2021 in Washington, DC.

(CNN) -- A federal judge ordered the Justice Department to turn over certain internal documents that may relate to its decision to prosecute Steve Bannon, the former adviser to Donald Trump who has been charged with contempt of Congress after his failure to comply with a House committee subpoena.

While it's not clear whether the documents covered by the order exist or what role they could play in Bannon's case, he is one of several witnesses sought by the committee investigating the January 6 insurrection who have raised arguments about executive privilege and whether it relieves them from their obligation to cooperate in the probe.

Depending on what DOJ ultimately produced under the new order -- issued Wednesday by US District Judge Carl Nichols -- it could offer insight into how the Justice Department views cases like Bannon's and how it sees his case as different from other scenarios where current or former government officials have not complied with congressional subpoenas.

Lawmakers have referred another recalcitrant witness, former White House chief of staff Mark Meadows, for prosecution -- though he has not been charged -- and lawmakers have signaled others may face legal jeopardy if they do not comply with congressional subpoenas related to January 6. Trump has repeatedly tried to shield from the House information from his time in the White House, but when tested in court so far, he has been unsuccessful.

Nichols rejected Wednesday several other requests Bannon made for more discovery, and the judge took only intermediary steps in how he was addressing an issue the Bannon team has raised about the Justice Department's efforts to obtain the phone and email records of one of Bannon's attorneys.

Nichols' partial grant for Bannon's request for internal DOJ records came after he asked several questions at the hearing about an opinion that had been issued by the Justice Department's Office of Legal Counsel -- which gives legal advice to the executive branch -- that said close advisers to the president are immune from congressional subpoenas for testimony where the president has asserted executive privilege.

Nichols said that OLC opinions, or a position of an entire division or litigative group, are the kind of writings covered by the production order he issued Wednesday.

In explaining why Bannon did not believe he was obligated to comply with the subpoena, Bannon's legal team has pointed to Trump's indications that he would seek to shield certain evidence the House committee was seeking on executive privilege claims. Members of the January 6 panel noted that Bannon was not a White House adviser during the period they were investigating.

Bannon's case, brought after he failed to comply with a subpoena from the House select committee, offers an important test of the powers of government as Congress tries to force consequences for witnesses who do not comply with subpoenas.

The case could also shed light on how broad Trump's powers could be in protecting the loyalists who defended his efforts to overturn the 2020 election.

In the run-up to Bannon's scheduled trial in July, both sides have battled over what they can put before a jury.

Nichols, who was appointed to the bench by Trump, has notable experience as former DOJ attorney who worked on an executive privilege case involving a congressional subpoena of the White House counsel to then-President George W. Bush.

The judge on Wednesday suggested to DOJ attorney Amanda Vaughn that it would be "inconsistent" for the department to take the position in an OLC opinion that a presidential adviser was immune from a congressional subpoena, but then argue the OLC opinion was irrelevant to a criminal contempt case then brought against the adviser. He offered as a hypothetical a scenario where the DOJ would prosecute Ron Klain, the White House chief of staff to President Joe Biden, for not complying with a congressional subpoena that, according to the OLC opinion, he was immune to. The judge later acknowledged the published OLC opinion in question did not exactly cover Bannon's situation.

The former Trump adviser was charged in November with contempt of Congress for his refusal to appear for a deposition and to produce documents that had been sought by the committee in its investigation into the effort to disrupt Congress' certification of Biden's win.

Bannon is pleading not guilty and has vowed to make his case "the misdemeanor from hell" for the Biden administration. He and his lawyers have questioned the motive for his prosecution, pressed prosecutors for more intel on their internal deliberations about charging him and argued that more evidence in his case should be publicly available.

Several of the Bannon team's attempts to obtain more internal information about the House and Justice Department's handling of his case were rejected by Nichols on Wednesday.

But the judge kept alive some of Bannon's efforts to learn more about how the government obtained communications involving Robert Costello, a Bannon attorney who represented him in his interactions with the House committee. The Bannon team has also taken issue with how the DOJ used a presentation Costello gave the Justice Department, before the indictment was issued, urging the department not to bring the case.

Bannon's attorneys were insistent at Wednesday's hearing that DOJ acted inappropriately in its pursuit of the records and committed a "terrible abuse" of the grand jury process in how it went about obtaining Costello's records. Costello recalled Bannon being "irritated" when he learned that the DOJ was treating the presentation Costello gave to the US Attorney's office as if it was a Costello interview with the FBI.

"The behavior of the FBI and, quite frankly, the DOJ has been outrageous, quite frankly to my attorney ... and the attorney-client privilege and everything they did and that's going to be worked out in court," Bannon, who was present at Wednesday's hearing, told reporters outside the courthouse after it concluded.

But Bannon's lawyers were vague in describing what they hoped to achieve if the government was required to hand over the documents Bannon was seeking, telling the judge that he needed to send a "message" about how DOJ behaved.

Bannon attorney David Schoen argued that if the judge did not address the DOJ's conduct, it would become accepted practice.

"I think that message has to be sent," Schoen said.

Vaughn, the DOJ's attorney, defended the department's efforts to obtain the Costello-related records. She said that, while it was not likely that evidence would be part of the department's case in chief against Bannon, prosecutors might introduce the evidence if Bannon attorneys sought to dispute at the trial that Bannon was aware he had been subpoenaed.

Also before Nichols on Wednesday was the fight Justice Department has mounted to stop Bannon from arguing as part of his defense at trial that he was following the advice of his attorney in not complying with the subpoena.

When the January 6 committee was demanding Bannon's participation in the probe, Costello pointed to claims of executive privilege Trump had said he intended to assert in the investigation. Bannon's team has also pointed to Costello's request that Bannon and the House resolve their legal disagreements about his obligations to cooperate with a civil lawsuit.

On Wednesday, Nichols came close to giving the Justice Department a significant win in that dispute, but then stopped short of granting the department's request that Bannon be barred from presenting the my-lawyer-told-me-to-do-it defense at trial.

The judge indicated that based on what had been filed in the court papers before the hearing, he was inclined to rule in favor of the Justice Department's request. He said the two main arguments Bannon had made in the paper briefings were not "persuasive."

But Schoen introduced at Wednesday's oral arguments a third, new argument for why Bannon should be able to use that defense, claiming that the appellate court opinion that instructed the judge to take DOJ's side in the dispute was in fact not applicable in Bannon's case.

Nichols said he was not happy that the Bannon team raised that argument for the first time at the hearing, but he felt unable to decide its merits on the fly. The judge asked both sides to submit a new round of court filings on the arguments in the coming weeks.